Forecasts of a further rise in bullion prices keep Indians away from selling gold.

After a buoyant June quarter, Indian consumers are now staying away from fresh sale of old or used gold and jewellery to generate cash in July and August, due to forecasts of a further rise in bullion prices.

Data compiled by the World Gold Council (WGC), the global gold miners’ body, estimated a record 37.9 tonnes of gold recovered from scrap jewellery in April-June 2019 quarter, up 18.4 per cent from 32 tonnes reported in the corresponding period last year.

Trading at Rs 31,648 per 10 grammes on April 1, 2019, standard gold price spiked to touch Rs 33,500 per 10 grammes towards the end of the June quarter, Such a price level had not been not seen in the past six years and tempted consumers holding old gold to encash it. The price further jumped from the June-end level by 12 per cent to Rs 37,519 per 10 grammes on Wednesday, August 14.

Since then, gold started moving up in the international market following estimates of US Fed’s interest rate cut, which weakened dollar but strengthened bullion. Analysts started forecasting robust safe-haven buying in gold amid fears of escalation in the ongoing trade war between the United States and China, and geo-political tensions in West Asia following global economic sanctions on Iran.

“There has been less consumer turnout for sale of used jewellery since July due primarily to hopes of further price increase. Used jewellery sales have declined by 50-60 per cent in six weeks starting July 1,” said Manoj Kumar Jha, Managing Director, Kamakhya Jewels, a Mumbai-based jewellery maker and retailer.

Echoing a similar response, Anantha Padmanaban, chairman of All India Gems and Jewellery Domestic Council (GJC) and managing director of Chennai–based NAC Jewellers said, “Indian consumers sell old jewellery only when they need urgent cash. Most had already sold their allocated quantity in the June quarter. Hence, sale of scrap jewellery in July and August has been significantly lower. We estimate a sharp decline in used jewellery sales during September quarter.”

“With gold price hitting seven-year high in the international market and a life-time high in India, domestic consumers are waiting for an opportunity to make fresh purchases. Gold demand was weak the past few months. We estimate a rebound in jewellery demand during the ensuing festival season of Dussehra and Diwali. There will be less old gold jewellery sale now on,” said Rajendra Jain, managing director, Swarovski Gemstones, a jewellery maker and retailer.

Shaankar Sen, managing director of Kolkata-based Senco Gold estimates the need-based sale of old jewellery to continue with a recovery in demand of fresh ornaments in coming months. 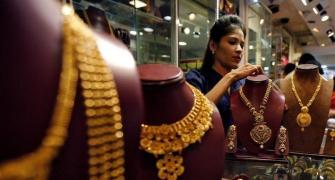