News
Business
Movies
Sports
Cricket
Get Ahead
Money Tips
Shopping
Sign in  |  Create a Rediffmail account
Rediff.com  » Business » Is it the right time to invest in gold?

Given the uncertainties around gold’s future course, stagger your purchases and buy on declines, says Sanjay Kumar Singh.

If the current rally continues, the yellow metal could regain its sheen among investors.

The rally has been triggered by actions of the central banks.

“Both the US Federal Reserve and the European Central Bank (ECB) have been pushing back expectations of a rate hike, or even quantitative tightening, which the US had already started, and the ECB was set to embark on,” said Chirag Mehta, senior fund manager-alternative investments, Quantum Mutual Fund.

In its last policy meeting, the US Fed maintained the status quo and signalled that its three-year drive to tighten monetary policy may be coming to an end.

The world’s major central banks are being forced to change their stance due to growth-related concerns.

In January, the International Monetary Fund reduced its global growth forecast for 2019 from 3.7 per cent to 3.5 per cent.

Gold’s price tends to fall when central banks are in a tightening mode (and interest rates are rising), and vice-versa.

A few other geopolitical factors have led to higher uncertainty.

“The Brexit issue, developments in Venezuela, and the trade war between US and China continue to be causes for concern,” added Mehta.

With rate hikes in the US being put on hold, the dollar has been weak for a couple of months, triggering investment demand.

“Gold exchange-traded funds (ETFs) have attracted buying interest in the past few months.

Mehta said in 2008, investors hadn’t hedged their portfolios with an allocation to gold, so they are being proactive this time.

Gold has performed better in the Indian market (up 12.8 per cent) compared with the international market (up 8.2 per cent) in the past six months due to the rupee’s movement vis-à-vis the dollar.

“A part of the gains has come because the rupee has declined 3.99 per cent against the dollar over the past six months,” said Vishal Dhawan, chief financial planner, Plan Ahead Wealth Advisors.

In the past, too, we have seen several short rallies in gold that have fizzled out.

“A trade deal between the US and China, a rate hike by the US Fed in June, or continuance of balance sheet unwinding by it could prove negative,” said Mehta.

He, however, expects any decline in its price from current levels to be limited, and short-term in nature.

Indian gold investors will also be impacted by the rupee, whose strength or weakness to a large extent depends on oil.

“Crude is expected to be range bound. But, if it shoots up due to geopolitical issues, the rupee could once again come under pressure, and that would be positive for gold,” added Dhawan.

Given the uncertainties around gold’s future course, stagger your purchases and buy on declines.

A 10 per cent allocation to gold should suffice.

This should be net of any holdings you already have in physical gold. While sovereign gold bonds (SGBs) are a good option, as they offer 2.5 per cent annual interest, liquidity can be an issue in the secondary market.

Buy only if you have a minimum horizon of five years (after which you can redeem the SGBs).

If you want greater liquidity, or want to stagger your purchases, ETFs are a better option. 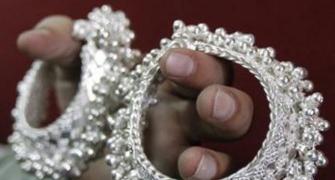 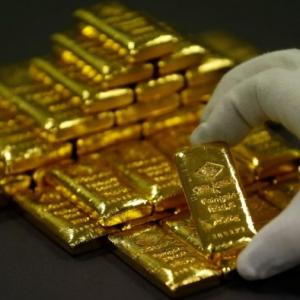