News viewership was the biggest gainer during the first full week of lockdown, growing 298 per cent versus the pre-COVID period between January 11 and 31.

Ramayana, whose rerun has begun on Doordarshan, was the top-rated show on Saturday and Sunday.

Viewers in India spent more time in front of their television sets during the first full week of the lockdown between March 20 and 27, data from the Broadcast Audience Research Council (BARC), released on Thursday shows, pointing to the seminal trend of the idiot box being a key source of entertainment and news to many in the country.

This comes despite time spent on smartphones growing 12 per cent in the week under review versus the period prior to the coronavirus disease (Covid-19) outbreak.

Smartphone users spent almost 3.8 hours daily on their devices during the lockdown, but this number pales in comparison to television viewership.

“This is the highest in terms of TV viewing for any period, with average daily viewers growing by 62 million,” Sunil Lulla, chief executive officer, BARC India, said.

News viewership was the biggest gainer during the first full week of lockdown, growing 298 per cent versus the pre-Covid period between January 11 and 31.

Ramayana, whose rerun has begun on Doordarshan, was the top-rated show on Saturday and Sunday, pushing Hindi general entertainment channel (GEC) viewership by 3 per cent, BARC data shows.

Interestingly, Lulla said non-prime time viewership was growing during the lockdown, with a surge of 71 per cent seen in the period under review at an all-India level, while Hindi-speaking markets saw a bigger peak, growing 83 per cent at the same time.

Lulla said share of news in total TV viewership touched 21 per cent during the lockdown period versus 7 per cent in the weeks prior to the outbreak.

Share of movies to total viewership touched 26 per cent versus 23 per cent earlier.

Advertising has also surged on television, since more people are spending time on the medium.

Overall advertising volume on TV grew 15 per cent in the period under review, with commercial time growing 24 per cent, 16 per cent, and 13 per cent on news, movies, and general entertainment, respectively.

Categories that advertised the most included food and beverages, services, and banking and financial sectors. 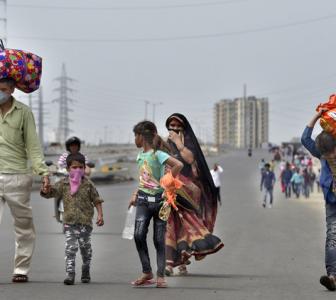