During March, the rate of inflation slowed to the weakest in four months and was below the long-run survey average 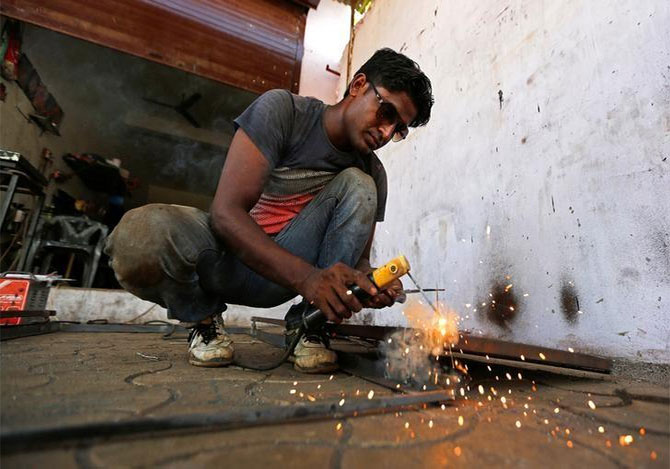 Indian manufacturing sector expanded for the third straight month and touched a five month high in March, driven by strong growth in domestic as well as export work orders, a monthly survey showed on Monday.

The Nikkei Markit India Manufacturing Purchasing Managers' Index (PMI) -- an indicator of manufacturing activity -- increased to a five-month high of 52.5 in March from 50.7 in February as production and order books expanded at the quickest pace.

March is the third straight month in which manufacturing sector improved after the demonetisation-induced contraction at the end of 2016.

A reading above 50 indicates expansion, while any score below the mark means contraction.

"PMI data for March reveal positive developments in the Indian manufacturing sector. Rates of expansion in factory orders and production accelerated again, encouraging some companies to scale up their input buying and take on additional workers," said Pollyanna De Lima, Economist at HIS Markit and author of the report.

On the prices front, the report said although both input costs and output charges rose further, inflation rates softened from February. During March, the rate of inflation slowed to the weakest in four months and was below the long-run survey average.

"Given that input costs rose at a softer pace, a whopping 96 per cent of goods producers kept their selling prices unchanged over the month," Lima added.

The Reserve Bank in its policy review meet on February 8 kept key interest rate unchanged at 6.25 per cent and said it is awaiting for more clarity on the inflation trend and impact of demonetisation on growth.

The next meeting of the MPC (Monetary Policy Committee) is scheduled on April 5 and 6, 2017.

Going ahead, the outlook looks bullish as business confidence among manufacturers improved in March, with almost one-fifth of panelists expecting output levels at their units to be higher in 12 months' time.

Lima further noted that production volumes are likely to rise further as businesses will seek to replenish their stocks.

"Indeed, we saw a marked drop in inventories of finished items, alongside a stronger degree of confidence towards the year-ahead outlook for output," she added.