News
Business
Movies
Sports
Cricket
Get Ahead
Money Tips
Shopping
Sign in  |  Create a Rediffmail account
Rediff.com  » Business » 'When people are suffering, how can you call it a good cause?'

'How can you ask the common man alone to suffer when the rich is not doing any sacrifice?'
'To take out 10% of black money, you are punishing 90% of the public who have genuine white money.' 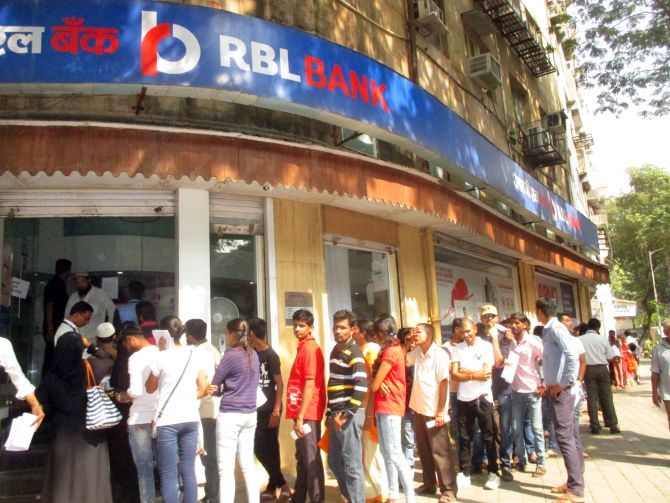 A fortnight after Prime Minister Narendra Modi demonetised Rs 500 and Rs 1000 notes in a sudden fiat, India is still reeling from the consequences.

Banks witness long lines for withdrawing money, ATMs are dysfunctional, and the countryside, which is primarily a cash-based economy, is ravaged by the decision.

The burden of implementing the decision has fallen on the banks, who have pulled out all stops to make sure the banking public is not put to trouble.

Working through the last weekend, working extra hours to manage the crowds waiting to withdraw money, the banking staff is a harried lot. 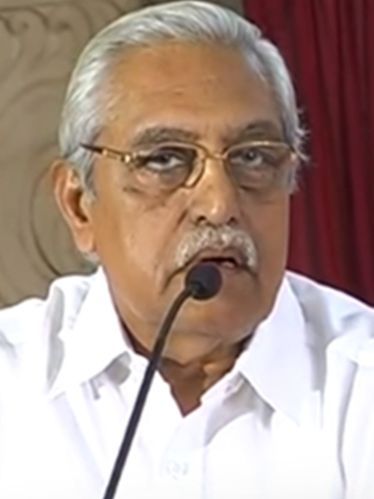 "The prime minister correctly said that our bank employees did one year's work in one week, that means 52 times more workload! Is it physically possible? I do not know how they worked like this," C H Venkatachalam, left,, general secretary, All India Bank Employees Association, told Rediff.com's Shobha Warrier.

How do you look at the hardship bank employees are going through all over India because of demonetisation? Do you think it's worth all the trouble?

The employees are expected to do a particular quantum of work every day. Beyond that, if they have to do some work, they are given enough remuneration for it.

But what they are doing now is humanly impossible and you cannot expect all the employees to do this kind of work for such a long period as they are suffering from a lot of stress and also physical problems. This hardship was avoidable.

What the government says is for the ultimate goal of fighting black money, they are asking people to make some sacrifices...

It's okay to sacrifice for the country. Let him (the prime minister) make the same call to the corporates who have black money. Let them also sacrifice.

It's humanly not possible for the bank employees to make this kind of sacrifice for 10 to 15 days.

You can't compare what the army is doing at the border with what the workers are doing. So many employees are very unhappy with what is expected of them day in and out.

The prime minister correctly said that our bank employees did one year's work in one week; that means 52 times more workload! Is it physically possible? I do not know how they worked like this.

Certainly, they were driven by dedication and conviction for a good cause.

Would you say it's a good cause, but implemented badly?

I don't think it's a good cause. When people are suffering, how can you call it a good cause?

This initiative will not help in eradicating black money.

Rs 500 and Rs 1,000 notes are commonly used by the general public. Yes, we know that it is mixed up with bad money. But black money in cash is a very small portion.

To take out, say, 10% of black money, you are punishing 90% of the public who have genuine white money.

It is a bad idea, according to me. It was also not planned properly, that's why the suffering.

Why do you say it's a bad idea? If the idea is to unearth black money...

When you are talking about economic revival and high GDP growth, with this one move you have killed small trade.

It will take a very long time for them to pick up the threads again.

What do you think the government should have done to bring black money out in the open?

What I am saying is, there is only a small portion of black money in cash. Bulk of the black money is in various kinds of investments, like property, gold, foreign currency, foreign bank accounts, stock market, benami holdings, etc.

We know that some portion is also held in cash.

The PM spoke about attacking real estate, gold, etc also in due course. Demonetisation, he said, was only the beginning. But according to you, attacking black money in cash should have been the last on the agenda?

Exactly. This should have been the last.

You make anti-corruption laws more stringent and make tax laws more favourable. Now, bulk of the tax revenues come from indirect tax which is a burden on the common people.

Direct tax is not at all progressive. In our country, tax-GDP ratio is the lowest, which means revenue from tax is not big.

Where is the fairness in this?

Tax rates have to be progressive and if it progresses from 2% to 40%, people will pay tax.

Tax rates are regressive in India when it has to be progressive.

Tax evasion happens because s/he is expected to pay high tax on her/his income after paying indirect tax on everything he buys.

That's why I am saying, they should have tackled taxes, real estate, gold, corruption, bribe, etc first and finally taken a call on demonetisation and not the other way round.

Who is suffering because of this move? The common man, the middle class, the wage earners.

How can you ask them alone to suffer when the rich is not doing any sacrifice?

Yes. This government came two-and-a-half years ago and from then on, they have been talking about wiping out black money. It was a priority for them.

Then, all the black money holders would have shifted their money to these higher denominations. And the 500 and 1,000 rupee notes would be used only by the ordinary people.

They could have demonetised the higher currency when this happened. This way, the ordinary people would not have been affected at all by such a move.

When 500 and 1,000 rupee notes are the most commonly used currency in India, the common people are badly affected.

What do you think is the rationale behind bringing in a denomination higher than Rs 1,000?

Why do you have to come out with a Rs 2,000 note when you are demonetising higher currencies?

Let's have only Rs 100 notes. When you have Rs 100 as the highest denomination, hoarding will become physically impossible.

When you have not eradicated corruption, when bribes have not been removed from the system, when tax evasion is rampant, you are not going to wipe out black money from the system.

These are the fountainheads of black money.

IMAGE: A bank in Mumbai that remained open on Sunday, November 13, 2016, to cope with the huge demand for deposits, exchange and withdrawals. Photograph: Sahil Salvi 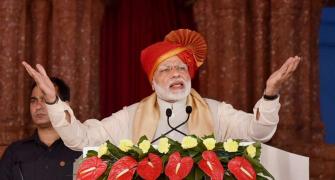 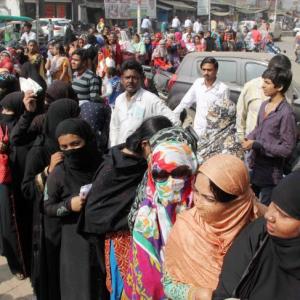