US diktat: Why didn't Modi stand up for India?

The Modi government caved in under American pressure without even token resistance.
Two countries similarly placed as India with high dependence on Iranian oil -- China and Turkey -- have shown the grit to stand up to Washington, says Ambassador M K Bhadrakumar. Prime Minister Narendra Damodardas Modi travels around the country every day claiming to be the defender of national interests in Pulwama, Balakot, ASAT and so on. But he is keeping deafening silence on the one issue that has come up in the foreign policy that is going to have devastating impact on the Indian economy and affect the lives of common people.

The US diktat to India to stop oil imports from Iran.

The White House diktat is certain to lead to a spike in India's oil bill. And, yet, only the Communist Party of India-Marxist has voiced concern.

If foreign policy is about enabling the country's development, the Modi government should show the political courage to tell the Trump administration that its attempt to hurt India's economic interests will be resisted.

Instead, alas, the media reports suggest that the government is meekly caving in to the White House decision on Monday to block other countries from trading in Iranian oil.

Most regrettably, what we see here is an abject surrender of national interests by our government, which is completely contrary to Modi's claims of being the custodian of India's development and prosperity.

The government has given a spin that it has arranged 'alternate sources' of supply of oil. This is plain sophistry. The real issue is that Iran has been supplying oil to India on highly concessional terms -- and not about the availability of oil as such.

Buying oil from the spot market has always been an option, but the government could significantly reduce its import bill by availing of Iran's favourable terms.

Not only that, the oil trade is a sleazy affair and only middlemen stand to gain if India switches to the spot market. The common man will bear the burden of hidden kickbacks. Iran was keen on a long-term arrangements with India.

The White House announcement on Monday claimed that Saudi Arabia and the UAE have agreed to offset lost barrels from Iran. However, Saudi Arabia has since given a measured response, saying only that it would add supply if needed.

The point is, Saudi Arabia also has to keep output below its ceiling as part of the OPEC+ deal (with Russia), which means that while in theory it could add a few hundred thousand barrels per day above current levels (approximately, 500,000 bps), that may not be enough to compensate for outages in Iran. And this doesn't take into account other disruptions in oil supply due to US sanctions against Venezuela and the civil war in Libya.

Saudi Oil Minister Khalid al-Falih has already gone to lengths to try to assuage the concerns of the OPEC+ group, stating that Riyadh would 'coordinate with fellow oil producers to ensure adequate supplies are available to consumers while ensuring the global oil market does not go out of balance.'

Furthermore, aside the strategic goal of keeping the OPEC+ group together, Riyadh also has budgetary concerns to keep the oil price as high as possible. The IMF estimates that Saudi Arabia would need oil prices at $ 80 to 85 per barrel in order to balance its 2019 budget.

According to OPEC figures, the oil and gas sector generates around 50% of Saudi Arabia's GDP, and accounts for some 70% of its export earnings.

Besides, Saudi Arabia relies on proceeds from oil to fund its hugely ambitious transformation programme known as Vision 2030, Crown Prince Mohammed bin Salman's grand project to channel billions upon billions of US dollars in investments to diversify the Saudi economy.

Therefore, all factors taken into account, oil prices are bound to shoot up in the months ahead, vastly increasing India's import bill. The government's calculation would be that if the BJP is returned to power, the increase in oil price can be simply passed on to the consumer, which was what the Modi government has been doing through the past 5-year period.

Of course, the danger of a worldwide economic recession due to high oil prices is already talked about.

The Modi government caved in under American pressure without even token resistance.

Two countries similarly placed as India with high dependence on Iranian oil -- China and Turkey -- have shown the grit to stand up to Washington.

At a news briefing in Beijing on Tuesday, Geng Shuang, a spokesperson for the foreign ministry, used harsh words to criticise the US decision and suggested that China has already taken pre-emptive actions.

'The Chinese side urges the US to seriously respect China's interests and concerns and refrain from taking wrong actions that damage China's interests,' Geng said. 'China has already made representations to the US side.'

Geng added that China 'firmly opposed' the US actions and cooperation between Iran and the international community, including China, 'must be respected and protected.'

Turkish Foreign Minister Mevlüt Çavuşoğlu asked in indignation: 'Why are you (the US) putting pressure on other countries? Take your own measures. Why do other countries have to obey your unilateral decisions?'

'We support an international system and multilateralism established through legal rules,' Çavuşoğlu said, adding, 'The fact that a country alone disrupts this and puts pressure on everyone to comply with its decisions is damaging and jeopardising the international legal system.'

In comparison, Modi and his Cabinet colleagues will not join issue with the American bully. The really bizarre part is that Washington is linking India's compliance with its diktat on Iran with its symbolic support for India's case on Masood Azhar!

This is blackmail. An appropriate quid pro quo should have been that the US blacklisted Pakistan as a State sponsoring terrorism. Will Trump dare to do that? No, he won't, because the US bases in Afghanistan are critically dependent on supply lines via Pakistan.

Trump apparently thinks Modi is a man of straw, contrary to the latter's self-projection. Indeed, he says insulting things about Modi every now and then, but the latter simply ducks and ingratiates himself even more.

Trump hikes tariffs on India's exports to the US, but Modi won't take reciprocal measures.

Trump demands duty reduction for Harley Davidson motorbikes, and Modi not only complies but phones up POTUS to personally convey the good news that he complied.

Does it come as surprise that the US decided to squash Modi's grand vision to expand and deepen economic cooperation with Iran via a payment mechanism that bypasses the dollar?

Washington estimated correctly that Delhi would chicken out and surrender. Such shameful behaviour must be in our DNA -- prostrating before the superior power while kicking the lowly underdog? 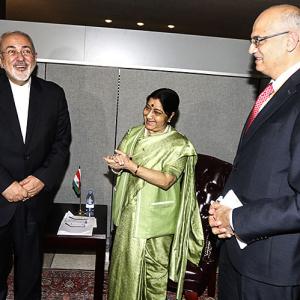