Every option before the finance minister comes with a price tag, observes T N Ninan. The Budget-making process will soon get under way in the finance ministry.

The fiscal outlook is the grimmest in at least three decades, and the challenges probably without precedent.

This year's nominal GDP will at best match last year's Rs 204 trillion, with inflation neutralising the drop in real numbers.

The government's non-debt revenue is unlikely to match that, since in the first half of the year it seems to have run at barely two-thirds of last year's level -- that is, a much bigger drop than in nominal GDP for April-September.

The second half of the year should do better, but non-debt revenue in relation to GDP will almost certainly shrink for a third successive year.

The gap, rather chasm, will have to be bridged through borrowing.

The government has indicated a limit of Rs 12 trillion, compared to Rs 8 trillion provided in the Budget.

It is likely to be more than that.

From financing just over a quarter of government expenditure three years ago, borrowing this year could end up financing well over 40 per cent of it.

Any housewife will know that this is unsustainable, even as demands have grown more urgent for increased government expenditure on defence, social security, and infrastructure.

So no compression of expenditure should be expected.

The circle will have to be squared by raising more revenue beyond the recovery in taxes, which should be expected as the economy starts growing again.

How is more revenue to be raised?

Under pressure because of the international trend of lowering corporate tax rates, the government has dropped tax rates for companies.

But it has raised the rates for individuals to a peak of nearly 43 per cent for those earning more than Rs 5 crore.

There is little that can be done on either of these, other than to close some tax loopholes that companies use, and raise the tax rates on capital gains.

The government could also re-introduce wealth tax, which had been dropped by Arun Jaitley because the revenue was small.

It is unlikely, though, that much revenue will be forthcoming because the really wealthy have already worked out tax shelters.

Your garden variety high-net-worth individual will feel the pinch, though.

It might be more remunerative to introduce a tax on corporate assets or net worth, in addition to the tax on profits.

The revenue is likely to be more, because the largest companies will end up paying the most.

But for that very reason the impact on the stock market will be greater, even as large numbers of companies that barely make a profit get hit the hardest.

Such a tax would also encourage firms to finance growth by accumulating debt instead of issuing equity, to reduce the size of net assets.

Such an increase in leverage will bring with it risks, by reducing companies's ability to withstand periodic downturns.

On the indirect tax side, the rates for goods and services tax average much lower than what was considered a revenue-neutral rate.

Tax theory advises against raising the rates for such a tax in a recession; indeed, various troubled businesses have been asking for reductions in GST rates.

But a government under extreme fiscal pressure may feel tempted to bite the bullet during an economic upswing.

More revenue would come at the cost of a slower recovery, and fuel inflation that is already too high.

And so every option before the finance minister comes with a price tag.

What the minister could hope for is a deus ex machina, or an act of god in the form of N K Singh, chairman of the Finance Commission, whose report is due.

If it recommends a smaller tax share for states, the Centre will get more money.

On what that would do to 'cooperative federalism', you don't need to guess. 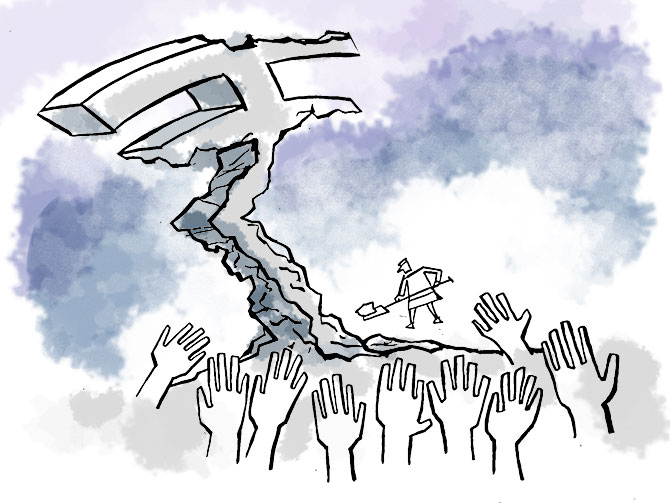