News
Business
Movies
Sports
Cricket
Get Ahead
Money Tips
Shopping
Sign in  |  Create a Rediffmail account
Rediff.com  » Business » Even Pakistan's growth rate is ahead of India's

'Misplaced national priorities have brought the economy to a cul-de-sac.

'There is a crucial foreign policy dimension to it -- India is in critical need of a peaceful external environment so that it can prioritise the economy.

'Plainly put, the government needs to apply itself diligently to keep down tensions in relations with Pakistan,' points out Ambassador M K Bhadrakumar. 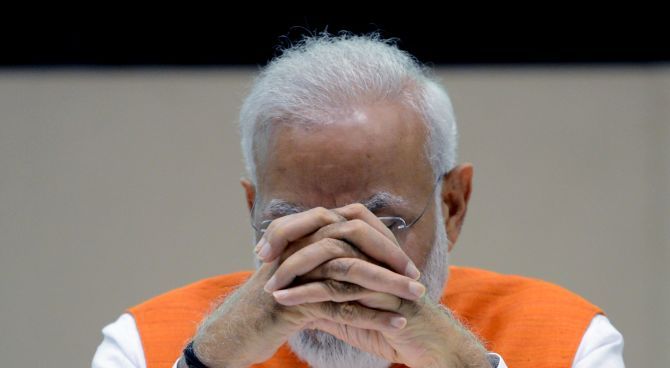 The stunning news that India's GDP growth rate is hitting a six-year low figure of 5 percent in the past six-year period comes as reality check.

Many economists hold the view that in actuality, take away the statistical jugglery, India's actual GDP growth figure could be somewhere around 3 percent.

Either way, it is a dismal scenario.

As mostly the case, it is the poor people who will suffer from the decline in the GDP growth rate than the rich.

There is going to be a significant decline in the employment rate and the number of people below poverty line could rise (external link).

Clearly, the 5-trillion dollar economy that Prime Minister Narendra Modi boasted about as his second term began 100 days ago seems a pipe dream.

Even to recall PM's quote becomes a painful embarrassment.

In a Reuters (external link) poll of economists, analysts believe the slowdown could persist for two or three years while much needed structural reforms are put in place.

The Reserve Bank of India said on Thursday a big push on infrastructure spending would be needed to revive consumer demand and private investment.

Structural reforms were also required to ease the path for businesses in India, it said.

What causes such profound disquiet is that all this appears to go way beyond a cyclical slowdown.

The economy has lost momentum.

To be sure, the government policy approach will need to be multi-pronged.

But this is also fundamentally a crisis of India's political economy.

Watch former PM Manmohan Singh's stern warning that the looming crisis should not be underestimated, as it is a combustible mix of many elements that aren't easy to separate -- deficiency in statecraft, populist politics, political vendetta, flawed economic measures, bad economic management, lack of accountability, authoritarianism, etc.

There is a crucial foreign policy dimension to it -- India is in critical need of a peaceful external environment so that it can prioritise the economy.

Plainly put, the government needs to apply itself diligently to keep down tensions in relations with Pakistan.

All that talk by senior Cabinet ministers about 'nuclear first use' and of 'taking back' PoK and Northern Areas from Pakistan is hogwash.

Standing on such emaciated legs, no country can wage a war.

Just throw into the dustbin all that jingoism.

Misplaced national priorities have brought the economy to a cul-de-sac.

This should be rude awakening and should prompt honest soul-searching.

What a wasteful foreign policy our country has been saddled with, focusing on vainglorious projects that have no relevance to the 'real India'! How does it help India if PM worships at the Krishna temple in Bahrain or receives the highest national award of the Emirati nation?

Alas, the diplomatic calendar of the present government since it took over in May shows that we are still focused on dream projects to boost the image of the Leader in the domestic audience and to pursue a US-centric foreign policy.

The foreign policy priority today is to somehow 'lock in' the Trump administration by buying more oil and LNG from the US even if at a much higher cost than what Iran is able to supply.

By succumbing to the US diktat, India is compelled to import phosphates -- a vital input for farming sector -- via enterprising Emirati middlemen rather than directly from Iran, at an increased cost of 30 percent! Who cares?

The government prioritises a mega energy conference in Houston, Texas, later this month so that we can buy more energy from the US -- and also, explore proposals for massive Indian investments in the American energy sector.

The idea is to substantially contribute to 'America First' so that Trump is somehow kept happy and the long-term 'Indo-Pacific strategy' aimed at containing China can be pursued without hiccups.

Of late, the thrust of Indian diplomacy lies in warding off the Pakistani challenge on the Kashmir issue.

But the more we go on that track, the more work it generates for our diplomats to 'counter' the Pakistani backlash.

It is all turning out to be a Catch-22 situation.

Not all the waters in the Ganga can clean the accumulating filth of the comparisons being bandied about in the world media between Modi's India and Nazi Germany.

We are going to get even more of all that when the European parliament meets to exchange views on the situation in J&K.

Delhi got the tip-off that PoK Prime Minister Raja Farooq Haider will be present at the European parliament when it will discuss the Kashmir issue.

So, External Affairs Minister S Jaishankar gets through to Brussels post-haste on the weekend with tons of detergent powder to sanitise the lobby.

Forget about India attracting Western businessmen as an investment destination in the prevailing setting.

And, make no mistake, no one is yet accounting for the massive haemorrhage of resources in the deployment of a million troops in J&K till eternity.

How many world economies can sustain such a futile enterprise?

Not even the US, the lone superpower.

Trump has programmed his diplomats to delver on his stern demand that the American troop level in Afghanistan should be drastically reduced in immediate terms -- from 14,000 troops to 8,600 troops.

He thinks it is 'ridiculous' and stupid that a great army trained to fight wars is deployed for police duties.

Trump is pressing hard for a political solution.

Doesn't some of all this rub on Modi when he converses with the leaders of Bangladesh, Nepal and Bhutan, the three top 'Asian tigers'?

Don't they talk serious stuff when they get quality time with Modi -- how well their countries are growing, but how much better they still could if only India ceases to be a laggard in the neighbourhood?