News
Business
Movies
Sports
Cricket
Get Ahead
Money Tips
Shopping
Sign in  |  Create a Rediffmail account
Rediff.com  » Business » Why Modi may no longer be in denial on economy

The reasons for the prime minister to speak to the readers of an economic newspaper and talk more about the economy were no less urgent, says A K Bhattacharya. 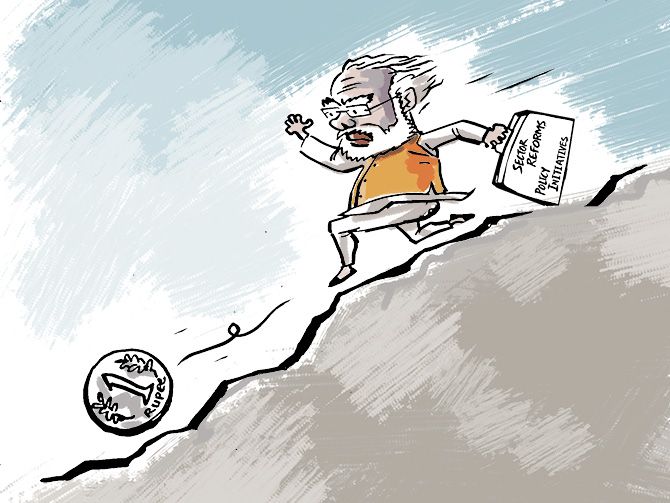 The first interview that a prime minister gives to the media is always closely watched and keenly analysed.

Last week, Prime Minister Narendra Modi gave his first interview after the formation of the new government to The Economic Times.

It was significant that he chose an economic daily for his first interview even though the new government’s preoccupation so far has been largely with its political agenda.

Just a few days before the interview, his government had withdrawn the special status for Jammu and Kashmir and effectively nullified the provisions under Article 370 of the Constitution.

His government had also reorganised the state into two Union territories.

An interview with a general newspaper and explaining in detail the government’s perspective on the moves initiated in Jammu and Kashmir would have been more appropriate perhaps.

However, the reasons for the prime minister to speak to the readers of an economic newspaper and talk more about the economy were no less urgent.

The deteriorating state of the economy and the largely negative response of India Inc and the markets to the government’s first Budget on July 5 were certainly pressing reasons for addressing economic issues in an interview.

After all, India’s economic growth had decelerated to 5.8 per cent in the January-March quarter of 2019 and the prospects for the following quarter were worse.

Exports growth continued to be a cause for concern, the global economic situation got more uncertain and the stock markets saw significant erosion in value, particularly after the Budget’s proposals on a super-rich tax that also hit large sections of foreign portfolio investors.

The idea, therefore, seemed to be to dispel the growing feeling among business leaders that the Modi government was more focused on its political agenda and less concerned about the economy.

A detailed interview on the government’s approach to the economy, even though it did not address many specific concerns of industry, was considered an instrument for sending out a message that Mr Modi was adequately engaged with the economy and its problems.

Jammu and Kashmir did figure in the interview, but it was completely overshadowed by economic issues.

Two messages from Modi came out loud and clear -- one for the bankers and the other for industry leaders.

For bankers, the message was intended to reassure them that there would be no witch hunt for their lending decisions taken in good faith.

The bankers were also urged to resume lending at rates that reflected the relatively low inflation level in the economy.

Almost in a similar vein, Modi asked industry leaders to make more investments and assured them that those who followed the law would receive the government’s full support.

He also talked about how his government took stringent action against dishonest tax officials.

Both the messages have come in the backdrop of reports of harassment of industrialists and bankers.

There have been reported instances of how the tax department has been harassing business leaders and traders to collect more taxes and meet their targets.

Many public sector bankers have become wary of approving loans for fear of the law enforcement agencies filing cases against them.

As a result, business leaders and traders are starved of resources that they could use for their ventures.

He compared the individual’s right to personal data as important as the right to private property.

The statement does not address the larger privacy concerns over data, but is nevertheless a message to giant multinational digital companies that are upset over the Indian government’s data localisation policy.

The Indian government has been insisting that foreign companies dealing in data in India must locate their data within the Indian geography and, therefore, become subject to the Indian laws on data.

Foreign digital giants could not have missed the import of that statement from Modi.

His second assertion pertained to the automobile industry, which has been shaken by a sharp fall in demand for passenger vehicles.

At a time when different government departments are setting different target dates for phasing out the traditional fossil fuel-based passenger vehicles and replacing them entirely with electric vehicles, Modi announced that the country’s market was large enough for the growth of both traditional vehicles (based on internal combustion engines) and electric vehicles.

He suggested that both types of vehicles could co-exist.

There were many other reassuring statements from the prime minister like those on the importance of fiscal consolidation, further reforms in sectors such as banks, pensions, insurance and power, more relaxation in norms for foreign direct investment, and liberalisation of labour laws.

His reference to the need for increased asset monetisation seemed to suggest that public sector divestment or even strategic sales of government equity in public sector undertakings (PSU) would receive high priority in the coming days.

But his equal emphasis on asset recycling is indicative of the government moving ahead with the earlier idea of selling existing assets like tolled roads and bridges to the private sector and use the resources generated from such sales to finance fresh investments in various infrastructure projects.

Those hoping that the government would loosen its purse strings and spend more on such infrastructure projects would be disappointed.

But asset recycling as an instrument for raising fresh resources to reinvest in a wide range of infrastructure areas is an idea, which now seems to be receiving serious government consideration.

Whether all these reassuring messages for bankers, captains of industry and taxpayers will help change the mood in industry and the markets, only time will tell.

And whether the economy benefits from such commitment on reforms in a host of sectors and other policy initiatives will depend on how soon and how effectively these ideas are actually implemented.

But that the prime minister chose to speak on such issues through an interview in a newspaper shows that he may no longer be in denial.

Modi may have recognised that the Indian economy needs urgent attention.