'The Budget numbers presented severely underestimate the magnitude of the unstated fiscal crisis that we went through in 2018-2019, which cannot be conceivably be fully reversed in 2019-2020,' points out Rathin Roy, director, National Institute of Public Finance and Policy. This year's Budget speech was the first I have seen that, in my memory, has no paragraphs on the fiscal situation which, along with the tax proposals, is at the core of any Budget.

However, it outlines the contours of government economic policy more generally, and does it well.

It also directly addresses concerns regarding the banking and financial sectors with concrete proposals to tackle the currently troubled situation.

The Centre's fiscal space was severely constrained. It is for this reason, perhaps, that the speech avoids any mention of the macro-fiscal situation.

This is understandable: It has not been the tradition in India to confront such difficulties openly.

The macro-fiscal numbers presented with the Budget documents suggest 'business as usual'.

Revenue receipts increase by only 0.35% of GDP in the same period.

Thus fiscal consolidation has been secured by consistently reducing the size of the central government and modestly increasing the revenue-GDP ratio.

This was looking good until I read Table 1, Chapter 2 Vol II, of the Economic Survey.

There, the provisional accounts for 2018-2019, as reported by the Controller General of Accounts (CGA), has presented data that is very different from those in the revised estimates (2018-2019 ES in Table).

According to the CGA data, the revenue-GDP ratio is 8.2%, a full percentage point lower than reported in the revised estimates.

But the ES pegs the fiscal deficit at 3.4%, the same as in the revised estimates.

How is this done given the stunning shortfall in the tax-GDP ratio?

If the survey is correct, it is most certainly not business as usual.

Our revenue performance would be dismal compared to previous years.

The CGA is the authorised institution to issue fiscal accounts.

If their numbers, as reported in the ES, are way off the mark, then this would cause a collapse in the credibility of the fiscal accounts.

But I have full confidence in the fiscal accounts.

However, if they are accurate, this would mean that the Budget numbers presented severely underestimate the magnitude of the unstated fiscal crisis that we went through in 2018-2019, which cannot be conceivably be fully reversed in 2019-2020.

This will be achieved by reducing the share of subsidies, finance commission transfers and the states's share of central taxes.

The first is laudable, the second not alarming -- such transfers taper off in the final year of the Finance Commission award.

The third continues an undesirable policy of raising revenues through non-shareable cesses, a predictable, if misplaced, response to the grave fiscal constraint the Central government is facing.

This reflects reality: The GST is not revenue neutral, and the political bargain to get the states on board with GST involved a generous compensation for their shortfalls.

This means that the Centre has had to bear the entire brunt of the deficit in GST collections.

This has been a costly price in loss of fiscal space that the Centre has had to pay to implement GST.

It is now of the first importance that we reiterate our commitment to this important reform and all stakeholders work to improve the effectiveness and buoyancy of GST: The finance minister's speech proposes important simplifying reforms.

Paragraph 103 of the Budget speech is brief but marks a major shift in government fiscal policy.

It proposes that the sovereign government of India borrow from foreigners to finance its expenditures.

I have grave concerns about this proposal on grounds of economic security and sovereignty, and about the macroeconomic consequences.

But there are no details in the Budget and it would be unfair to comment until the concrete policy proposal is made explicit.

But I would respectfully urge transparent reflection and consultation before taking this route. 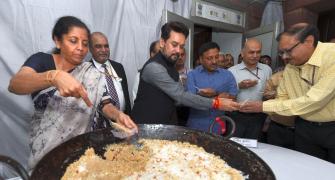