'If some measures are implemented quickly, they can help revive growth.' 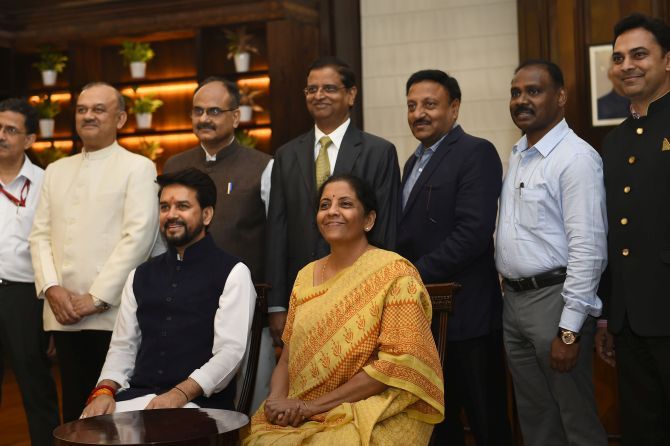 "A great cause for concern is the reliance given on foreign savings. The finance minister spoke of the low external debt in the Budget. This, in fact, was hard earned by the RBI and finance ministry over a period of 25 years. It is because of this that many external shocks did not affect India. There seems to be a rethink on this now, which, in my view, will be risky," Dr N R Bhanumurthy, below, professor of economics at the National Institute of Public Finance and Policy, tells Rediff.com's Shobha Warrier.

When we spoke last, you had said you were looking for a Budget that would address all issues even at the cost of exceeding the fiscal deficit target.
The finance minister on the other hand is proud that she has adhered to the 3.3% fiscal deficit target.
Did the Budget address the issues that you wanted it to?

Actually, I have been arguing for relooking the overall fiscal deficit target set by the FRBM (Fiscal Responsibility and Budget Management) committee because that does not take into consideration many of the anticipated expenditure.

I was also arguing for flexible fiscal targets.

I felt the fiscal deficit target they have fixed at 2.5%, the revenue deficit at 0.8% and the public debt number of below 40% they have suggested may not be macro consistent for achieving a higher growth of 8%.

Of these targets, the Government of India has adapted only two: The fiscal deficit number and the public debt number. They ignored the third target of bringing down the revenue number.

In that sense, it is not internally consistent that by bringing down the fiscal deficit to 2.5% we will see public debt going below 40%.

In the process, the government has relaxed the revenue deficit target and then compromised on capital expenditure.

This, I feel will not help in reviving growth and if growth does not happen, you cannot bring down public debt to 40%.

One of the biggest issues India faces is unemployment, also lack of growth. You spoke about unreal growth. Do you think this Budget will give impetus to real growth and create employment?

What the Budget assumes is that by creating a conducive environment, the private sector will increase their investment and thus growth will be revived.

Once you revive growth, you will see employment opportunities also rising.

But in my view, that is more of a medium-term objective. This may not lead to immediate revival of private investment in the current year.

The government has pumped in Rs 70,000 crore as capital to public sector banks. Will it help tide over the non-performing assets crisis?

This was one of the suggestions that was made before the Budget. It should help the banking sector. But it all depends on how fast the recapitalisation of banks happens.

Unless this is done quickly, banks will not be able to start doing business with the private sector.

If that happens soon, will we see revival in growth?

Yes, recapitalisation of banks is one positive measure I see in this Budget.

The Budget wants investments to happen mostly by the private sector. The government will concentrate more on the rural and social sector where they will focus on some flagship programmes like rural housing, urban housing, roads, etc which have been successful for some time.

The Budget provides a good roadmap for reviving investments in the infrastructure sector and focusses more on connectivity. 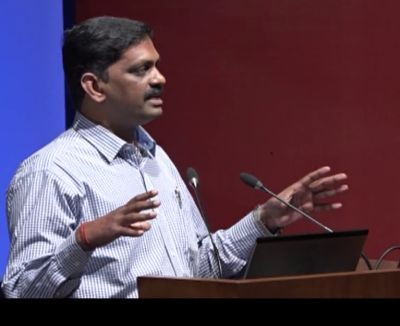 Will the private sector be enthused enough to invest?

They will be looking at a long-term growth story. They will invest today, expecting a return of 8% or 7% in future.

I feel the private sector should be more confident in investing now as the Government of India has taken many major initiatives, particularly streamlining labour laws, the bankruptcy code, bringing down the corporate tax, etc.

There is an effort to bring in foreign savings so that there is not much pressure on domestic savings. These initiatives should help the private sector to start investing.

The Economic Survey said if India were to become a $5 trillion economy by 2024, it needed 8% growth every year. We had a growth of just 5.9% in the last quarter.
Do you think this Budget will lead to 8% growth?

The government itself is forecasting 7% growth this year, 7.3% in in the coming year and 7.5% after that.

Is the Budget more of a vision document than a budgetary exercise?

Yes. I also feel that this Budget is not meant for just this year.

It is more of a medium-term policy document that tries to focus on achieving a $5 trillion economy by the end of the 5-year term.

This Budget is looking like more of a semi Five Year Plan document.

If you look at the old Planning Commission documents, they look like this.

Focussing on roadways, waterways, electricity connections with the government focussing on the social and agricultural sector over a period of five years.

That way, I am happy with such focus.

In the absence of a Planning Commission, we were actually worried about what is the medium-term target of the economy.

Now, we have a target of a $5 trillion economy in the next 5 years. This is the way it should be.

But should a Budget be like a Planning Commission report?

All along, many of us have been asking for a rolling Budget because you cannot have a policy that ends in March and a new policy that starts from then on.

In that way, this Budget may be slightly deviating from the past, but it is a good deviation.

MSME was one sector that suffered the most due to demonetisation and GST. The sector is yet to come out of the shock. Do you think the initiatives in the Budget can help a revival of the sector?

The Economic Survey has focussed so much on the MSME sector. Though the focus of the Budget was not on the sector, as we go, we will see more measures towards this sector.

Some initiatives in the Budget will help the sector temporarily. But we still need to address the roadmap that is suggested in the Economic Survey.

Won't the customs duty hike on fuels be inflationary?

Nobody will say it is not inflationary. But will it have a major impact? I guess not.

Right now, we have benign international oil prices, which might have led to a reduction in retail prices.

But by putting duty, it could help the fiscal to some extent. I guess once oil prices go up, this might be reverted.

There will be a partial impact, but as such we have a very low inflation rate. Even if inflation goes up to 3.5% to 4%, it is still within manageable limits.

Do you think the orientation of this Budget is more on Socialist lines? Or is it reform-oriented?

I would say it is a combination of all. The Budget focuses on simplification of processes for investment at the same time looking into the concerns of rural India.

It also addresses some external issues through import tariffs to protect domestic industry.

It is a combination of structural reforms and inclusive development while protecting domestic industry.

Given the constraints, I am satisfied to some extent.

I would have expected the fiscal policy to be more proactive.

I feel there is a need for more public investment, but you see too much reliance on PPP (public–private partnership) mode while our experience with PPP was not great so far.

I feel we should have a different strategy than focussing majorly on the PPP mode.

But there are two or three things in the Budget I like. Recapitalisation of banks, scaling up of many of the rural infrastructure projects like roads, housing, electricity, water and Swachh Bharat.

These are great things that have happened in the rural area. They needed scaling up and the Budget has done that.

The negatives I see are putting restrictions on imports, but then they are trying to address the current global situation.

I also expected more policies for the MSME sector.

Another area I feel that is great cause for concern is the reliance given on foreign savings.

The finance minister spoke of the low external debt in the Budget. This, in fact, was hard earned by the RBI and finance ministry over a period of 25 years. It is because of this that many external shocks did not affect India.

There seems to be a rethink on this now, which, in my view, will be risky. It is a cause for concern.

You might have temporary relief, but will turn out to be very risky in long term.

It was a fine balancing act.

Overall, do you feel this Budget will create a positive environment for growth?

If some of the measures proposed by the government are implemented quickly, they can help in reviving growth in the economy.;