'For those looking at forward-looking signals for the economy from the stock markets, the relative performance of small and mid-caps may be a better indicator of the future than the index levels of the narrower and more popular indices', says Neelkanth Mishra.

The stock market is widely believed to be a forward-looking indicator of the economy.

While one may struggle to find an individual who has perfect foresight, the market, some believe, is a 'neural network' of many individuals who through their collective buying and selling of stocks, end up reflecting economic trends months, and at times years before they happen.

This learning machine, people assume, can be smarter than the individuals participating in it.

This is a tempting proposition, and for those of us who have spent a long time in the markets, several examples come to mind of stock prices moving well in advance of fundamental changes that no one saw coming.

At the same time, long timers also remember irrational pricing (both on the higher and the lower side), and of the mania and the panic of crowds, to not buy into this fully.

So where does one put the current disconnect between weak economic momentum and soaring stock markets?

Are the markets forecasting an economic recovery, or will they soon start reflecting the weakness in the economy and correct meaningfully?

At this juncture, it is worth remembering that the constitution of the stock market differs widely from that of the economy.

To demonstrate this we split the top 500 stocks into four categories: Global, Macro, Penetration and Market Share.

The stocks in Macro category are the ones most impacted by domestic economic growth, including industrials, public sector banks, cement and utilities.

The Penetration category has companies that can grow faster than the economy due to factors like formalisation and improved distribution.

Demand for insurance and air-conditioners, for example, has held up well despite the economic slowdown.

In the Market Share category we place the private banks, which continue to grow at a double-digit pace despite a slowdown in bank credit growth, as they are taking away market share from public sector banks.

What this reveals is that less than a fifth of the market capitalisation is in the Macro category, under-scoring the disconnect between the stock market and the economy.

In theory this should not be for long, and forward earnings should have a role to play.

Market participants's decision to deploy funds should also be affected by their expectations from the market.

On this count, in addition to the steady inflows into domestic mutual funds, which has been well flagged, one must note that foreign portfolio investors (FPIs) have also net bought more than $16 billion in the last 12 months, a four-year high.

This is despite sharp downgrades to India's economic growth expectations by forecasters, and foreign investors that one talks to being wary of several unresolved risks, including in the financial system.

It does not appear likely that flows would reverse meaningfully.

To understand this, let us look at the nature of ownership of the stock market: About half of it is owned by 'promoters', which includes the government and private promoters.

About a fifth of this is owned by sovereign wealth funds, foreign central banks and pension funds: These funds have a standard India allocation, and they also keep seeing inflows.

Another fifth is owned by 'broad-based funds' (such as hedge funds), and of the half that is owned by mutual funds, a significant part is the India allocation from emerging markets, Asia or global funds.

These are benchmarked to equity indices, and most necessarily have some India positions.

As these benchmarked funds get inflows, a reflection of strength in global equity markets, at least some flows end up in India.

India's weight can be lower than the benchmark if the fund manager does not like India's prospects, but is rarely zero.

Over the past year a large part of FPI purchases have been financials - these still have reasonable earnings growth, and strong medium-term prospects.

Domestic institutional ownership of the stock market is at a record high, courtesy the steady inflows into mutual funds.

This gain in share has occurred at the expense of the government whose share is now at a record low of 8 per cent, down from 28 per cent a decade ago, mostly due to poor performance of government-owned stocks, and partly due to continuous sales of stake.

Remarkably, retail ownership of stocks is also at a record low of 14.2 per cent, though the decline here is less steep.

Our analysis suggests that this could be due to savers moving assets from managed portfolios (PMS or portfolio management services) to mutual funds.

This is because the assets under management (AUM) of the small and mid-cap funds is at an all-time high, and 29 per cent higher than the lows seen 15 months ago, despite the weakness in small and mid-cap indices, whereas PMS assets have declined.

One reason could be lower fees charged by mutual funds compared to PMS.

FPIs remain focused on the larger and liquid stocks.

Remarkably, even for domestic mutual funds, passive funds now account for 15 per cent of AUM: Four years back this was nearly zero.

Investors choose these funds to save on management fees, and to place a longer-term bet on the market; these flows have also been boosted by the EPFO.

Small and mid-caps have been underperforming the narrower indices for two years now.

They bounced back strongly on a relative basis in January, as they have in seven out of the last eight Januaries.

But, like in most Februaries, they have again begun to lag, and may continue doing so.

Among the small and mid-cap stocks the exposure to the domestic economy is higher than in the large-cap stocks.

Their ownership too is more domestic, and thus less affected by foreign fund-flows.

For those looking at forward-looking signals for the economy from the stock markets, the relative performance of small and mid-caps may be a better indicator of the future than the index levels of the narrower and more popular indices. 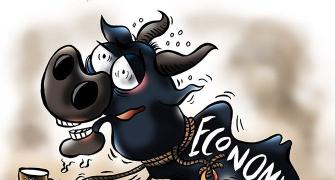