News
Business
Movies
Sports
Cricket
Get Ahead
Money Tips
Shopping
Sign in  |  Create a Rediffmail account
Rediff.com  » Business » Slowdown: Is there an end in sight? An Economic Survey, written at the time of what appears to be a prolonged economic slump can perhaps be best 'judged' on the basis of its ability to answer two questions.

Has the government's Chief Economic Advisor, its intellectual-in-residence and the Economic Survey's principal author, provided a consistent diagnosis of why such a situation has come to pass?

Second, has he come up with a set of solutions that could alleviate the crisis or at least halt the slide in the economy?

I would argue that the Economic Survey scores reasonably well on its reading of the current economic slowdown.

For one thing, it offers fresh insight that goes beyond the much used binary classification of a structural versus cyclical slowdown.

It does so by the somewhat provocative claim that the Indian economy has been under the influence of a slowing growth cycle since 2011-2012.

The roots of the slowdown go back to a credit bubble of the 2000s that quickly boosted consumption and growth.

However this bubble burst as they invariably do.

Companies either became insolvent or rushed to pay down their debt anticipating imminent insolvency.

The credit fuelled boom of the 2000s ended with the bust of the current decade.

Investments suffered as companies were keen on repaying debt rather than taking fresh loans to add to capacity.

In this rather bewildering world of economic dynamics, the impact of a slowdown in one variable is felt on another with a considerable lag.

The Economic Survey finds that private investments affect GDP with a lag of three-four years and the effect of GDP growth on consumption manifests after a lag of one-two years.

Going by these calculations, a marked consumption slowdown set in in 2017-2018.

Throw in tepid global growth and enhanced risk in the financial sector and you get an intense economic slowdown of the kind that seems to have gripped our economy over the last couple of years.

Is there an end in sight? The Economic Survey seems convinced that 2019-20 saw the bottom of the economic cycle.

Going by most other forecasts, this would appear a tad optimistic but not entirely unrealistic.

Ihis would translate into a nominal growth rate of 10 to 10.5 per cent and is likely to underpin in the revenue forecasts of Budget 2020.

How will GDP growth pick up by a full percentage point from this year to the next?

To answer this, the Economic Survey picks a side in the current debate on whether fiscal stimulus or consolidation is desirable at this stage.

It makes a case for counter-cyclical fiscal policy that is either the government putting more money hands of people (through tax cuts or income transfers) or by spending more itself... While this might raise the hackles of those who have argued that an insidious fiscal crisis has already crept in, the Economic Survey sees no reason for alarm for essentially three reasons.

First, a low share of external debt in the debt portfolio with almost entire external borrowings being from official sources pretty much rules out the typical emerging market crisis.

Second, 'most of the public debt has been contracted at fixed interest rate making India's debt stock virtually insulated from interest rate volatility'.

Third, the gradual elongation of the maturity profile of the central government's debt reduces debt rollover risks for the government.

While the Economic Survey seems fairly confident in both its prognosis of the current slowdown and the cure for it, it suddenly turns more reticent when it comes to the business of mitigating risk in the financial sector.

The only counsel that the CEA has for the devastated realty sector and housing finance companies that are sitting on mounds of toxic assets is for builders to drop house prices to clear inventories.

The refusal to even discuss a fiscal mechanism to flush out some of the toxic assets that have clogged the financial system is disappointing.

It is interesting to see that the so-called 'theme' of the Economic Survey is 'Enable Markets, Promote 'pro-business' policies and strengthen 'trust' in the Economy'.

Besides, Volume 1 that contains the softer chapters of the Economic Survey begins with a discussion on ethical wealth creation and the need for business and market-friendly policies to attain the much discussed goal of becoming a $5 trillion dollar economy.

These along with its fairly sharp argument against government interventions in markets (as with the ESMA) or in prices (as with the DPCO) seems like an attempt to bring about a rapprochement between the government and industry that has often complained of getting short shrift.

I would be curious to know whether the CEA is offering an olive branch to industry or alternatively sensitising his colleagues in government to the perils of being anti-business.

It is difficult to come up with a final verdict on an Economic Survey.

As far as its thesis for the economic slowdown is concerned, it makes for interesting reading although there is every chance that its predictions will go awry as they do with most economic models.

It is both credible and independent in that it is not in denial of the current economic predicament.

Neither does it make an unabashed defence of the government's economic policies.

The problem with it (as with all Economic Surveys) is that it really doesn't matter in the bigger scale of things. 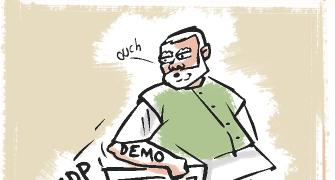