News
Business
Movies
Sports
Cricket
Get Ahead
Money Tips
Shopping
Sign in  |  Create a Rediffmail account
Rediff.com  » Sports » Once a boxing champ, he now cleans drains for a living

Once a boxing champion, life has dealt Krishna Routh a severe blow.

Payal Mohanka chronicles the plight of an achiever and the apathy of a disinterested administration. 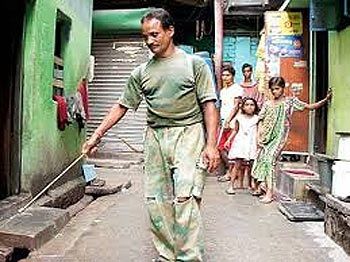 His power-packed punch had once helped him to face the challenges of the boxing ring. The crowd cheered, the adrenalin pumped and he savoured each victory. In his euphoric state little did he realise that life would often knock him out as it ruthlessly delivered blow after blow.

West Bengal state boxing champion Krishna Routh, who received accolades at several state and national championships, is today a temporary sweeper in the Howrah Municipal Corporation. He sprays pesticides and disinfectants in the open drains of Ward No 42 and earns Rs 232 a day.

A congested lane with shops huddled next to each other leads into a rain-washed pencil-thin alley. Number Five Bagdipara Lane in West Bengal's Howrah district is home to 43-year-old Routh. His one-room dwelling is crowded with the belongings of its seven occupants: His mother, wife, three children and his brother who is in hospital undergoing treatment for tuberculosis.

The bed is propped up on four bricks mounted vertically. Half his family sleeps on the bed, the rest on the floor below. His mother stretches her tired limbs next to the cooking area. Buckets of water stand in a corner. "We don't have a tap. I fill the buckets three times a day from the common tap in our locality," he explains.

On bad days there is a searing pain in his back. Years of boxing have resulted in a spine injury which worsens with strenuous labour. But even this pain is easy to combat compared to the indignities our government heaps on this one-time champion.

Memories of those heady days of success come rushing back as he displays his huge collection of certificates. For a brief moment he relives the thrill of victory and the garlands around his neck as the entire neighbourhood rejoiced when he returned home.

Ten-year-old Routh would watch with utter fascination as two young boys of his locality were taking boxing lessons. "I got inspired too," he manages a smile. He loved cricket and football as well, but boxing for him became a passion. Nothing excited him more than rushing out at the crack of dawn to practice.

His mother Manki Devi, who is in her sixties, softly adds, "I used to go and watch him box. I was filled with both awe and fear. I would return home after ten minutes." Routh won the Gold Medal in the All India Invitation Boxing Championship (the Surya Sen Trophy) in 1987 and the runner-up trophy in 1992. In 1987 he also won the Lalchand Roy Memorial Boxing Championships and in 1990 the West Bengal State Championships. In 2007, the Indian Amateur Boxing Federation certified him as a coach.

Boxing consumed his every waking hour. There was an obsessive drive to better his game and hone his skills. His studies suffered a setback and he dropped out of school after the fifth standard. Today, this is a cause of deep regret for him, "I thought boxing would get me a job in the army. It didn't. My 5 ft-height and my lack of education were major drawbacks." IMAGE: Krishna Routh in the alley outside his one-room dwelling. Photograph: Payal Mohanka

In 1990 Routh registered with the sub-regional employment exchange in Howrah. To this day he has not heard from them.

Once he was married, boxing gradually took a back seat as he struggled to make ends meet. His efforts to find employment were futile. The Howrah Municipal Corporation was his only recourse. His father Mahavir had been a sweeper in the same civic body. After his demise, his mother became a permanent sweeper.

Once she retired, Routh had hoped that he would get an opportunity. But for the last decade he has been a temporary sweeper at the corporation.

His travails continue. July 4 he submitted his bill for work done in the previous month. After two weeks of following up with the authorities, he finally got his wages for June on July 18.

The ignominy of the chase drains him.

The constant refrain 'When will I get my money?' tires him, the endless queues and then returning home empty-handed. "The uncertainty kills me," says Guddi Devi, his wife. By the time the money arrives, it just disappears as the debts have accumulated.

Surely the administration can inject an iota of dignity in the disbursement of money earned through sheer hard work? 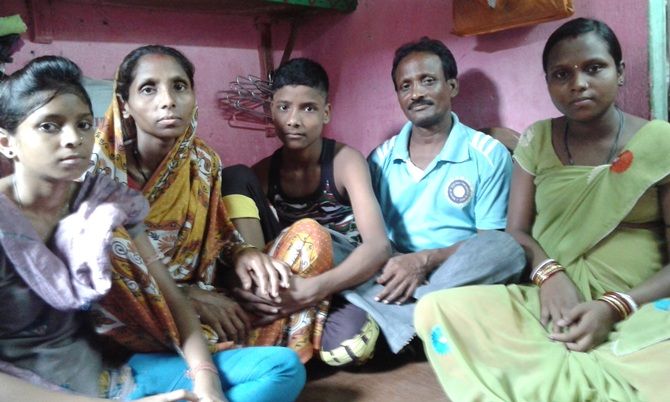 IMAGE: Krishna Routh with his family: From left, his 15-year-old daughter Khushboo, his wife, son Raj, and other daughter Priyanka, who is married. Photograph: Payal Mohanka

Routh dreams of a day when he will be a permanent sweeper at the corporation. If this dream becomes a reality, then salary will be handed out on a fixed day. Moreover, he will be paid for each day of the month unlike his dismal present when national holidays are days of dejection rather than celebration as no work means no pay. Even if he wishes to, he cannot work on national holidays.

While his eldest child Priyanka is married, 15-year-old Khushboo and 13-year-old Raj are in school. Like any parent, he and his wife have dreams for their children. Raj has already won a bronze in a competition organized by the Bengal Amateur Boxing Federation and a silver in a sports festival in north Calcutta. "My son wants English tuition. He can write in English, the way you are writing," he says with pride, pointing at my notebook.

To add to the family's meagre resources, his wife too has now begun working as a casual sweeper with the corporation and earns Rs 100 a day. IMAGE: Krishna Routh is a mentor to the budding boxers from his locality

Come evening, Routh puts his anxieties aside and immerses himself in his one true passion. He gives boxing lessons through the Howrah District Boxing Association to almost 60 boys in the locality together with his former coach Tapan Kumar Basu. "These children are very talented, but not well off. We just charge them Rs 200 a year primarily for equipment like boxing gloves, punching bags and sandbags for practice. Our boys have been consistently winning. If I had a permanent job, I would not be insecure and I could focus on coaching with even greater passion," says the pugilist.

Routh's story is indeed a sad reflection of our country's attitude towards those who do us proud.

A calendar of Ma Tara looks down benignly from the wall. Faith and hope bind his family together. The plight of an achiever and the apathy of a disinterested administration will not crush them. 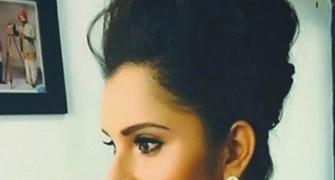 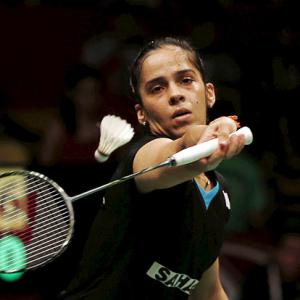