Sign in  |  Create a Rediffmail account
Rediff.com  » Sports » Did Suarez dive? Mourinho feels it was an 'acrobatic swimming pool jump' Image: Luis Suarez of Liverpool goes to ground after the challenge from Cesar Azpilicueta of Chelsea
Photographs: Julian Finney/Getty Images

Luis Suarez's ‘wild nature’ was on display as he tried to win a penalty with an ‘acrobatic swimming pool jump’ that deserved a yellow card for simulation, according to Chelsea manager Jose Mourinho.

Chelsea had done well to stifle the Liverpool marksman before the flash point in the final stages of their absorbing 2-1 victory at StamfordBridge on Sunday that left Mourinho and Liverpool boss Brendan Rodgers in firm disagreement.

Trailing after goals by Eden Hazard and Samuel Eto'o following Martin Skrtel's early strike, Suarez set off after Chelsea fullback Cesar Azpilicueta only for Eto'o to block his run, leaving the Uruguayan on the floor appealing in vain to referee Howard Webb.

"The player is amazing and I love his quality, commitment and ambition to play," Mourinho told British media of Premier League top scorer Suarez, banned for 10 games after biting Chelsea defender Branislav Ivanovic in a game last April. "I know him from his time at Ajax. A very nice boy. He does everything to win, and Brendan has done a very good job with him because he's changed. No doubt, he's changed.

"But when you are losing, the nature comes out of the player. The wild nature, the cultural nature of the player. Culturally, people from that area, they like it. Not just that area. There's a corner in Europe, where I belong too, where they like that too.

"One of the things we have good in this country is we don't like simulation. It's not good for our game. Azpilicueta had the ball, he was leaving the box, and now Suarez is doing an acrobatic swimming pool jump to try and get the penalty because he's so clever he knows he's in the penalty area right in front of the Liverpool supporters.

"I hate players who try to provoke situations, and he tries too much to provoke these situations. Suarez lost that duel with Azpilicueta, Eto'o comes in and it looks like somebody shot him in the back. Webb is 10 metres away and the only mistake he made was not giving him a yellow card." 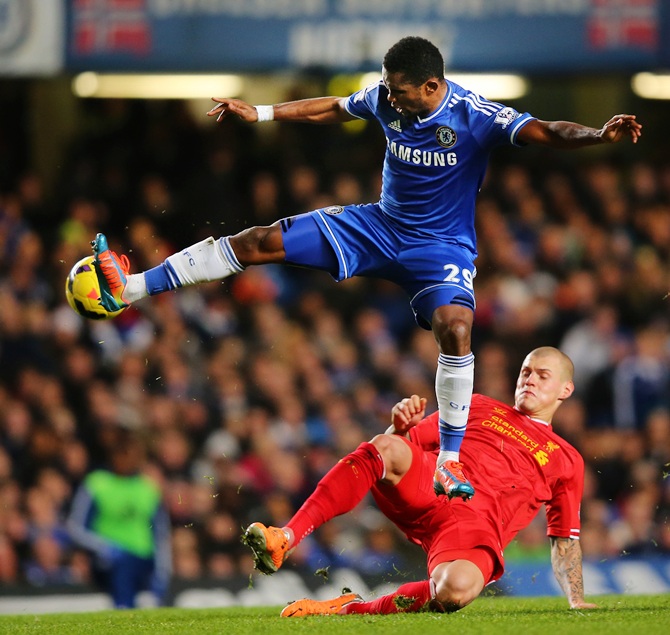 Cameroon striker Eto'o was at the centre of a number of incidents in the intense clash before he toe-poked home his third league goal of the season that helped Chelsea to a 2-1 win to stay within two points of league leaders Arsenal.

As well as the Suarez penalty claims, Eto'o was guilty of a poor challenge on Jordan Henderson that resulted in the free-kick from which Skrtel put Liverpool ahead in the third minute.

"Let's talk about the first Eto'o incident when he should have been sent off," said Rodgers, who previously worked with Mourinho at Chelsea during the Portuguese's first spell in charge.

"I know we scored from the free kick, but that was a wild shank where he's come down his knee and shin and didn't even get a yellow card.

"That's the first wild challenge. On the second one, Luis will always provoke a challenge from defenders in the box. That's why he's world class.

"What he wouldn't expect is it coming from somebody off the ball. He blocks him. That could have been a penalty on another day as obstruction in the area. But he (Mourinho) will defend his players. I will defend mine." 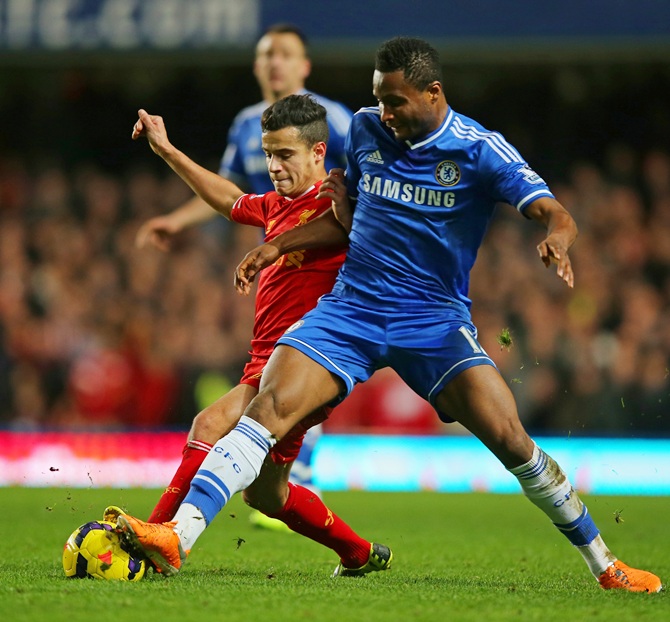 The Northern Irishman said he "didn't like" his Brazilian playmaker Philippe Coutinho and defender Mamadou Sakho swapping shirts at the end of the first half with Chelsea duo Oscar and Eto'o and he would speak with them.

That conversation appears to be the least of Sakho's worries after the tall Frenchman limped away with a hamstring problem near the end of the costly match for the visitors, who also lost Joe Allen to injury.

Rodgers, whose side slipped to fifth and six points back of leaders Arsenal, said reinforcements were required in the January transfer window for his injury-hit side who are also without captain Steven Gerrard and striker Daniel Sturridge.

"We've shown that if we get the players back, and get some help in January, we'll be in the shake-up. If we can add to it and get some depth, that'll really help you in the second half of the season when you need it.

"It's still open. I'm looking forward to the fact we still have to play every big team apart from Manchester United at home, and Anfield's now a tough place to come.

"Christmas day, eating our turkey, we were top of the league. A few days later we're fifth. But it makes it really exciting."