Former champion Isha had to settle for a runner-up finish this time around as the 15-year old Rutuja claimed a 6-3, 6-3 win in the final.

Isha had come through the qualifiers into the main draw.

"It is a great feeling. This is the second one in the family and I have been looking forward to this moment for a Long time," Yuki, whose sister Sanaa has also won the national title in the past, said.

"It was a great contest, Vishnu really played well. I lost my concentration for a while in the second set but remained patient to win the title. I think, I was trying to do a bit more," the 19-year-old Delhi lad, who pocketed Rs 1.5 lakh as prize money, added.

Vardhan, who had made a very impressive debut at India's Davis Cup tie against Japan, said he had his chances but the better player won today.

"Yuki is a very good player and he played some really good tennis today. I had my moments in the game but, particularly during the second set but unfortunately could not hold on to them," said Vardhan.

"After losing the first set I had to come hard and in the way I gave away some easy points to Yuki, but I am happy with my performance over all. I played some good tennis throughout the tournament and even today I was happy to see some of the shots coming good," he added.

Left-handed Isha said she was not disappointed at losing the title-clash.

"I am happy to see a youngster winning the National title. Rutuja can do much better if she gets physically gets stronger. I did not come into the tournament with expectations at all. From the qualifying till here, being runner-up was a nice run," she said.

In the boys' under-18 final, Arjun Khade faced some stiff resistance from Mohit Jayaprakash before winning 7-5, 6-1. 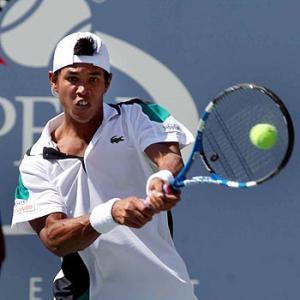