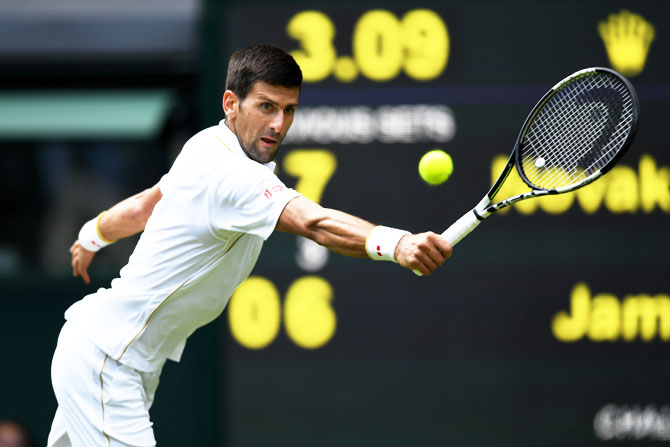 IMAGE: Serbia's Novak Djokovic plays a backhand shot during his Wimbledon first round match against England's James Ward at the All England Lawn Tennis and Croquet Club in London on Monday. Photograph: Shaun Botterill/Getty Images

It was not quite the triple bagel that Novak Djokovic was aiming for during the opening 41 minutes of his first-round match but the Serbian is unlikely to be too disappointed after he beat Britain's James Ward 6-0, 7-6(3), 6-4 at Wimbledon on Monday.

The holder of all four grand slam titles appeared to be hurtling towards his 29th successive win at a major when he opened his Wimbledon defence by jumping out to a 6-0 3-0 lead. 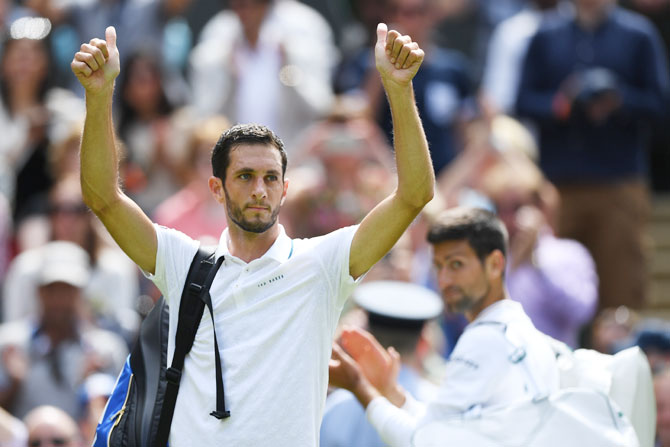 But Ward, the son of a London black cab driver, did not want to make a quick getaway on his Centre Court debut and held both arms aloft after finally getting a game against his name on the scoreboard.

The 177th-ranked wildcard went on a roll as he won three games on the trot but despite his fightback, he simply did not have enough weapons to stop Djokovic from setting up a second- round showdown with Frenchman Adrian Mannarino. Roger Federer began his 18th consecutive Wimbledon challenge with a straight-sets win over Argentina's Guido Pella on Monday -- but it was never straightforward for the Swiss as he won 7-6(5) 7-6(3) 6-3.

The third seed, bidding for an eighth Wimbledon title at the age of 34, struggled to shake off a gutsy opponent before his class prevailed.

More importantly, he showed no sign of the back injury that forced him to miss the French Open, ending his run of 65 consecutive appearances at grand slam tournaments.

"I worked so hard to be here," Federer told reporters.

"My hope was to be here fully fit. No one knows, not even myself. But we'll see." 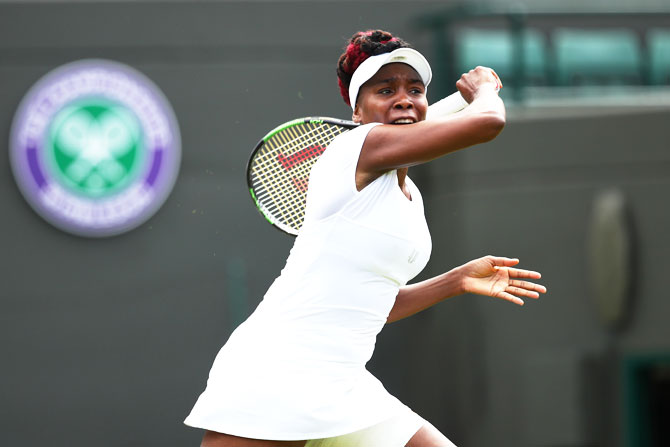 As she has done for most of the past 18 summers, Venus Williams on Monday took a large, languid stride into the second round of Wimbledon.

The oldest woman in the main singles draw, five-times champion Williams was at times sublime as she beat Croatian Donna Vekic 7-6(3), 6-4 on a sunny Court One.

While the full Williams armoury had been on display, it was her mental strength which stood out -- perhaps no surprise given she is playing her 71st grand slam singles tournament, a record among current female players.

Vekic produced startling groundstrokes at times, but eighth seed Williams maintained her composure, increasing the pressure when things got tight as her opponent wilted in the spotlight.

There cannot be too many grand slam years left for Williams, who celebrated her 36th birthday this month, but she showed more than enough on Day One to suggest she could again go deep in her favourite major.

Marin Cilic's firepower proved too much for American Brian Baker as the Croatian cruised through his Wimbledon first-round match 6-3, 7-5, 6-3 on Monday.

The 6ft 6in tall ninth seed, a quarter-finalist last year, thundered down a series of 130 mph-plus serves and stinging forehands to see off the challenge from Baker, ranked a distant 589th in the world.

Cilic, 27, broke serve once in each of the first two sets. Baker, whose career has been plagued by knee, elbow and hip injuries, had a glimmer of a chance in the second when he too had break points - but Cilic emphatically shut the door with a series of unreturnable serves.

The 31-year-old American's resistance crumbled in the third set as his serve was broken twice by Cilic, who was cheered to victory by his coach Goran Ivanisevic, a former Wimbledon champion.

Towering veteran Ivo Karlovic flew the flag for a small army of 30 somethings as he put teenager and fellow Croatian Borna Coric firmly in his place at Wimbledon on Monday.

He also demonstrated that he is no one-trick pony, plucking some sensational low volleys way down off his shoelaces and out-witting Coric with his crafty sliced backhand.

Coric, part of a new generation of teenagers tipped for the top, could not hide his frustration as he made little impact on the most destructive serve in tennis.

His mood was not helped as he let slip a 6-2 lead in the second-set tiebreak, the 19-year-old raging at his coach and entourage as he went two sets behind.

The 2.11-metres tall Karlovic, who added another 26 aces to the world record 10,825 he had served in his career coming into Wimbledon, needed just a solitary break of serve in the third set to seal an impressive victory.

Karlovic is one of 49 men aged over a 30 in the men's singles draw -- a Wimbledon record.

The 21-year-old, ranked 68th in the world, gave the Court Two crowd in the sunshine only a few moments to really cheer on as his touch and accuracy faltered against the left-handed world number 55.

Edmund is one of six British men in action on the tournament's opening day, with 2013 champion and second seed Andy Murray getting under way on Tuesday against another Briton, Liam Broady.

British wildcard James Ward had the honour of opening the Centre Court action - but with defending champion and world number one Novak Djokovic on the other side of the net, it will be a big ask to reach the second round.

The Serb became the highest women's seed to perish on day one, losing 6-2 7-5 to the world number 223 playing her first ever grand slam match after coming through qualifying.

"I mean, for two weeks I've struggled with my right wrist. It was very hard to accelerate on my forehand. I tried to do everything possible to be fit and recover and tape it and so on.

"But, yeah, it was a little bit sore. I feel like it caused me a lot of miss-hits."

Ivanovic, seeded 23, reached the quarter-finals of the Wimbledon warm-up event in Mallorca this month but it was there that she started to struggle with her wrist.

"It really got inflamed," Ivanovic, one of nine grand slam champions in the women's singles draw, said.

"I had a couple of days off and it started to calm down a little bit. Every time I would start hitting, it would flare up. I felt like I could probably manage it.

"But it's tough on grass when the ball really skids through. She was hitting very heavy. It was disappointing."

Raonic up and running as Big Mac watches on

Under the watchful gaze of new coach and tennis royalty John McEnroe, sixth seed Milos Raonic got off to a solid start with a 7-6(4) 6-2 6-4 win over Spain's Pablo Carreno Busta at Wimbledon on Monday.

While the Canadian was not at the powerful best that took him to his first grasscourt final at Queen's just over a week ago, his class and big serve overwhelmed Carreno Busta 7-6(4) 6-2 6-4.

Much of the attention on Court Two was devoted to three-times Wimbledon champion McEnroe, who slipped into the players' box when Raonic was 3-2 up in a close first set. As many cameras and phones were pointed at him as his 25-year-old charge.

Raonic, hoping to better his 2014 semi-final appearance when he lost to Roger Federer, took the second set with a cheeky lob over the Spaniard, ranked 46th in the world. The Canadian needed seven match points to seal the match in the third.

© Copyright 2020 Reuters Limited. All rights reserved. Republication or redistribution of Reuters content, including by framing or similar means, is expressly prohibited without the prior written consent of Reuters. Reuters shall not be liable for any errors or delays in the content, or for any actions taken in reliance thereon.
Related News: Venus Williams, Novak Djokovic, Borna Coric, James Ward, Ivo Karlovic
SHARE THIS STORYCOMMENT
Print this article 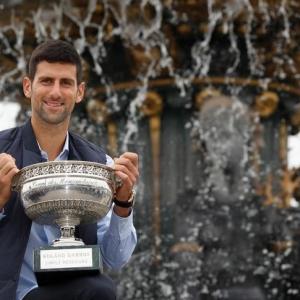