News
Business
Movies
Sports
Cricket
Get Ahead
Money Tips
Shopping
Sign in  |  Create a Rediffmail account
Rediff.com  » Sports » US Open: Seeds that fell by the wayside

Exodus of big guns opens up bottom half of men's draw

IMAGE: Eighth seed Tsitsipas, who reached this year's Australian Open semi-final, was the next out the door as he fell 6-4, 6-7(5), 7-6(7), 7-5 to Russian Andrey Rublev. Photograph: Clive Brunskill/Getty Images

The bottom half of the US Open men's draw, where three-times champion Rafael Nadal resides, was blown wide open on Tuesday after four of the top-10 seeds crashed out at the first hurdle of the year's final Grand Slam.

Austria's Dominic Thiem, Greek Stefanos Tsitsipas, Russian Karen Khachanov and Spaniard Roberto Bautista Agut were all sent packing before Nadal restored some semblance of order to his half of the draw.

"That's tennis," Nadal, who used a clinical display to beat John Millman in his New York opener, told reporters when asked about the slew of upsets.

Eighth seed Tsitsipas, who reached this year's Australian Open semi-final, was the next out the door as he fell 6-4, 6-7(5), 7-6(7), 7-5 to Russian Andrey Rublev during a match in which the Greek lashed out at the umpire.

IMAGE: Russian ninth seed Khachanov, who could have faced Rafael Nadal in the quarter-finals, was the final victim of the day, losing to Canada's Vasek Pospisil. Photograph: Danielle Parhizkaran-USA TODAY Sports

Austrian fourth seed Thiem, who was projected to meet Nadal in the semi-finals, then followed his peers to the exits as he suffered a 6-4, 3-6, 6-3, 6-2 loss to unseeded Italian Thomas Fabbiano, making him the highest-seeded casualty.

"I mean, congratulations to him and I'm happy for him. But it was not the real me there on the court," said Thiem, who prior to the tournament downplayed his chances because of a virus he picked up in the build-up to the US Open.

Russian ninth seed Khachanov, who could have faced Nadal in the quarter-finals, was the final victim, falling 4-6, 7-5, 7-5, 4-6, 6-3 to Canada's Vasek Pospisil, who recorded his first win in 2019 after missing several months after surgery.

"If you play bad, you can lose," said Nadal.

"Tsitsipas had a very tough first round.

"Of course, Karen is a surprise. I think Thiem has been very sick for the last 10 days. I feel very sorry for him.

"Roberto was a surprise. Honestly, I'm very sad for him."

IMAGE: Former champion Sloane Stephens was stunned by Russian qualifier Anna Kalinskaya 6-3, 6-4 in the first round of the US Open on Tuesday. Photograph: Clive Brunskill/Getty Images

Edmund paid the price for making 77 unforced errors, although he served 12 aces to Andujar's seven.

American Tennys Sandgren recovered well from a disappointing start to beat Jo-Wilfried Tsonga 1-6, 6-7(2), 6-4, 7-6(5), 7-5, helped by the Frenchman making 58 unforced errors during the first round match.

In the women's draw American Alison Riske came back from a set down to beat 24th seed Garbine Muguruza 2-6, 6-1, 6-3 in a match that lasted just over two hours.

Former champion Sloane Stephens was stunned by Russian qualifier Anna Kalinskaya 6-3, 6-4 in the first round of the US Open on Tuesday.

The American 11th seed, who triumphed here in 2017, fought off two match points but on the third was caught off guard when a backhand from the Russian clipped the net chord and landed in.

© Copyright 2021 Reuters Limited. All rights reserved. Republication or redistribution of Reuters content, including by framing or similar means, is expressly prohibited without the prior written consent of Reuters. Reuters shall not be liable for any errors or delays in the content, or for any actions taken in reliance thereon.
Related News: Rafael Nadal, Dominic Thiem, Stefanos Tsitsipas, Roberto Bautista Agut, IMAGE
SHARE THIS STORYCOMMENT
Print this article 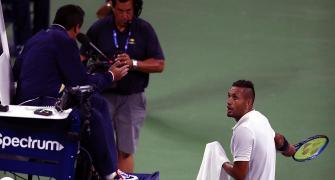 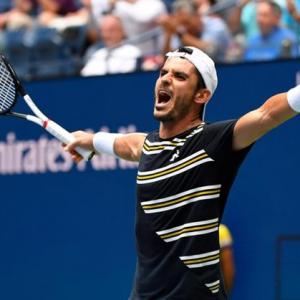