Images from the second day at the US Open, the final Grand Slam tournament of the year, in New York, on Tuesday: 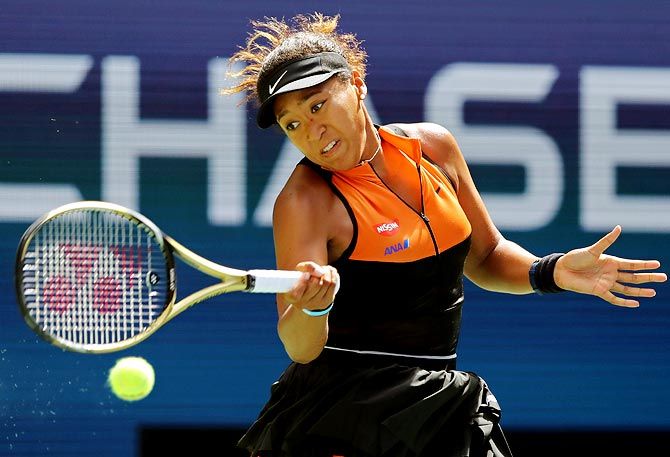 World number one Naomi Osaka was given a testing workout by Anna Blinkova in the US Open first round on Tuesday, but the defending champion's power and shotmaking ultimately proved too much for her opponent as she prevailed 6-4, 6-7(5), 6-2.

The unseeded Blinkova raced into a 4-1 lead in the first set and a shock appeared to be in the works but Osaka cut down her errors to win five straight games and take the opener.

Yet a tenacious Blinkova refused to back down, saving a match point on Osaka's serve in the second set before breaking her to set up a tiebreak, which the Russian won when Osaka sent a return into the net.

The 21-year-old Japanese responded by looking to her box and mimicked putting a gun to her head and pulling the trigger.

Osaka stayed composed in the third, however, breaking Blinkova to take a 3-1 lead before sealing the win with a blistering forehand winner that caught the line. Russian Andrey Rublev used a steady stream of power from the baseline to upset eighth-seeded Greek Stefanos Tsitsipas 6-4, 6-7(5), 7-6(7), 7-5 on Tuesday and reach the second round of the US Open.

World number 43 Rublev, who two weeks ago earned the biggest win of his career when he beat Roger Federer in the third round at Cincinnati, attacked Tsitsipas with a barrage of all-in forehands and broke his opponent five times in the match.

Rublev displayed near flawless judgment with his shotmaking throughout the match and while Tsitsipas tried to lure him off the baseline, the Russian stuck to his gameplan to prevail in a battle of 21-year-olds that lasted nearly four hours.

"Both of us were tired. He started to cramp ... I was cramping in the match and tried not to show it," said Rublev.

"When you win matches like this it gives you lots of confidence."

Tsitsipas, whose best showing at a Grand Slam came this year in Australia where he reached the semi-finals, received a coaching warning for his dad's behaviour early in the third set at Louis Armstrong Stadium.

The Greek, one game after receiving a time violation in the fourth set, then became furious when the umpire would not allow him extra time on the changeover to change his bandana.

An angry Tsitsipas told the umpire: "You're a weirdo, you're all weirdos." He also asked to be given a point penalty, which the umpire granted at 3-4 before Rublev went on to hold to love.

Tsitsipas showcased a well-rounded game that featured solid serves, relentless forehands and plenty of trips to the net but Rublev took his game to a higher level.

The Russian played predominantly at the baseline, pounding groundstrokes and stinging forehands that zipped by Tsitsipas and painted the lines.

Tsitsipas seemed to hurt his left wrist when he used it to brace himself from falling hard to the court after reaching for a backhand volley in the opening game.

But the Greek, who has a one-handed backhand, seemed mostly unbothered when play resumed but was unable to slow down an in-form Rublev.

Up next for Rublev, who reached the US open quarter-finals in 2017, will be either Frenchman Gilles Simon or American wildcard Bjorn Fratangelo. 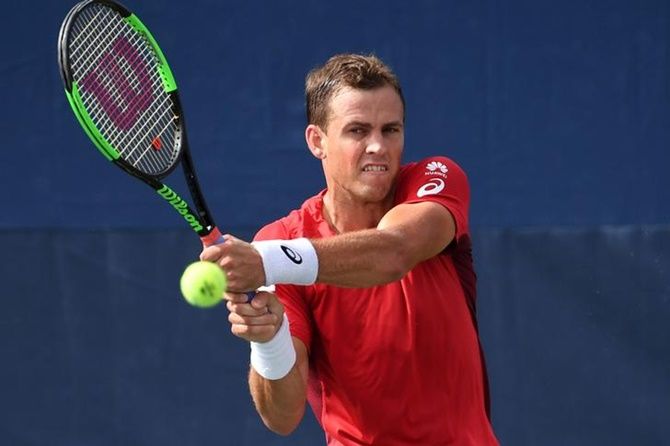 Pospisil, who has fallen to 216th in the world rankings this year after having back surgery in January that sidelined him until Wimbledon, fired 15 aces and broke Khachanov four times during the nearly four-hour encounter.

The 29-year-old Canadian, who has never advanced past the second round in New York, will next face unseeded American Tennys Sandgren, who beat Frenchman Jo-Wilfried Tsonga.

Bautista Augut upset by Kukushkin in first round Bautista Augut, who reached the semi-finals at Wimbledon last month, was broken seven times by Kukushkin as he exited the year's final Grand Slam in the opening round for the second consecutive year.

It was Kukushkin's first victory over the Spaniard in four career meetings.

Up next for the Kazakh will be Australian Alexei Popyrin, who beat Argentine Federico Delbonis 6-1, 7-5, 7-6(5) earlier on Tuesday. Wimbledon champion Simona Halep snapped a string of early US Open exits with a 6-3, 3-6, 6-2 victory over American lucky loser Nicole Gibbs to reach the second round.

The Romanian fourth seed, who fell at the first hurdle in New York the last two years, looked to be heading for yet another early exit but came out firing after losing the second set to Gibbs.

"But then I just refreshed my mind and tried to push her back and come forward a little more."

The 135th-ranked Gibbs had six set points while serving at 5-2 in the second but Halep coolly turned each one aside before winning the game only for her opponent to break right back and force a decider.

Halep then perked up as she opened the third set with a break and raced out to a commanding 5-1 lead that proved too big a hole for Gibbs, who failed to qualify for the U.S. Open but entered the main draw after other participants withdrew.

"Am I allowed to dream big again for this tournament?" said Halep, who reached the semi-finals here in 2015 and quarter-finals in 2016 before two consecutive first-round exits.

Up next for Halep, who is vying to become the first woman since Serena Williams in 2012 to follow a Wimbledon win with a US Open triumph, will be American qualifier Taylor Townsend. 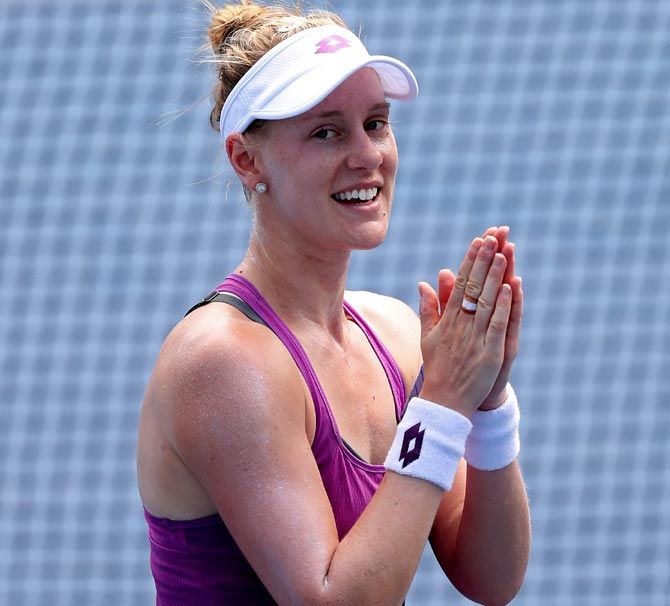 American Alison Riske came back from a set down to beat 24th seed Garbine Muguruza 2-6, 6-1, 6-3 in a match that lasted just over two hours, in the first round. Italy's Matteo Berrettini beat Frenchman Richard Gasquet 6-4, 6-3, 2-6, 6-2 to advance to the US Open second round for the first time in his career.

The 23-year-old fired 18 aces in beating his veteran opponent in two hours and 43 minutes.

Kvitova eases into second round 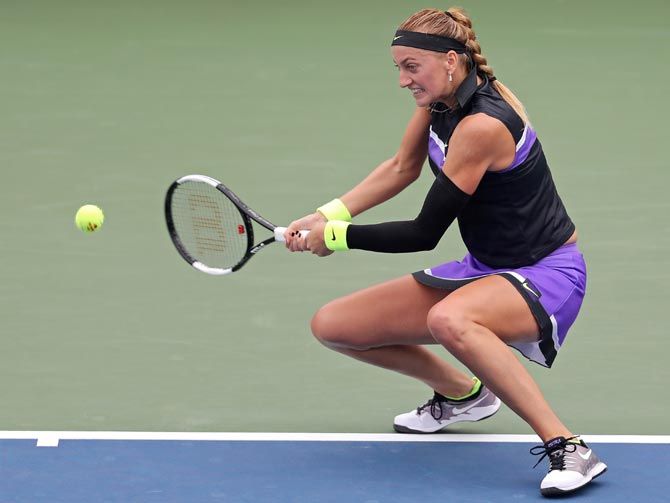 Petra Kvitova eased past Czech compatriot Denisa Allertova with a 6-2, 6-4 victory to move into the second round.

Kvitova, who was runner-up at the Australian Open this year, converted four break points and smashed 16 winners while Allertova double faulted six times and made 33 unforced errors to hand the sixth seed the win in 79 minutes.

© Copyright 2020 Reuters Limited. All rights reserved. Republication or redistribution of Reuters content, including by framing or similar means, is expressly prohibited without the prior written consent of Reuters. Reuters shall not be liable for any errors or delays in the content, or for any actions taken in reliance thereon.
Related News: MuguruzaAmerican Alison Riske, Kvitova, Denisa Allertova, Matteo Berrettini, Garbine Muguruza
SHARE THIS STORYCOMMENT
Print this article 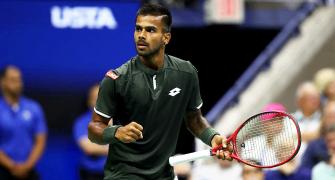 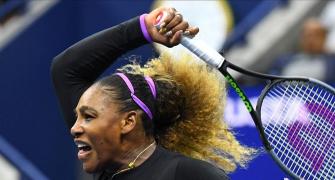 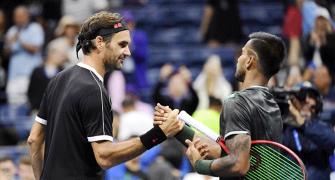 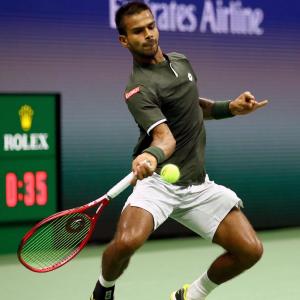 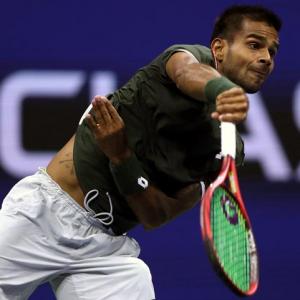