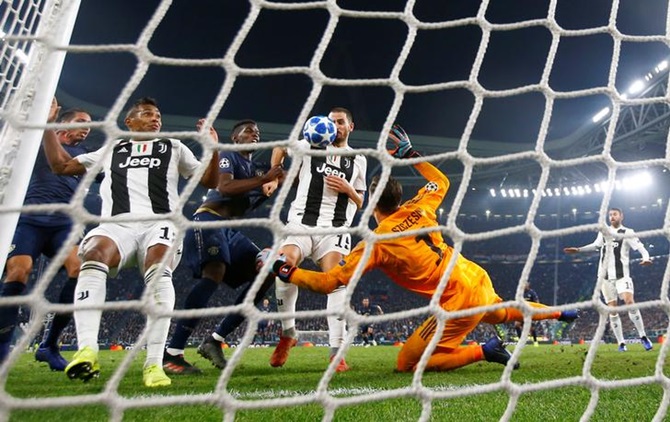 Manchester United snatched an extraordinary and barely-deserved 2-1 win at Juventus in the Champions League on Wednesday with a late free-kick from Juan Mata and a scrappy own goal reviving their hopes of reaching the last 16.

Cristiano Ronaldo looked to have haunted the club which turned him into a global superstar when he volleyed in the opening goal in the 65th minute after Juventus had dominated proceedings and struck the woodwork twice.

Jose Mourinho’s side had looked toothless in attack but after the Portuguese threw on Mata, Marouane Fellaini and Marcus Rashford late in the game they staged the most unlikely of comebacks to revive memories of their epic 3-2 win from two goals down in Turin in the 1999 semi-finals.

Spaniard Mata equalised with a perfectly-executed free-kick in the 86th minute and United caused bedlam in the Juve area with another set-piece, with the ball appearing to go into the net off Alex Sandro after a knockdown from Fellaini.

Competition organisers UEFA later credited Juve defender Leonardo Bonucci with the goal, which meant United became the first English team to beat Juventus away from home in 15 years, when a previous United team, inspired by Ryan Giggs, won 3-0 at the old Stadio dello Alpi in 2003.

The stunning finale prevented Juventus from sealing their place in the last 16. They still lead Group H with nine points but United are second on seven, two ahead of Valencia in third place, while Young Boys are bottom of the group and can no longer finish in the top two.

Defeat would have likely obliged United to beat Young Boys at home and Valencia away to qualify. Now they can seal qualification for the last-16 with a victory against the Swiss side if Valencia fail to beat Juventus in their next fixture.

“We thought we were going to have two finals to play. Now we have one final. A win against Young Boys could do it. Let’s hope we can qualify,” Mourinho told reporters. 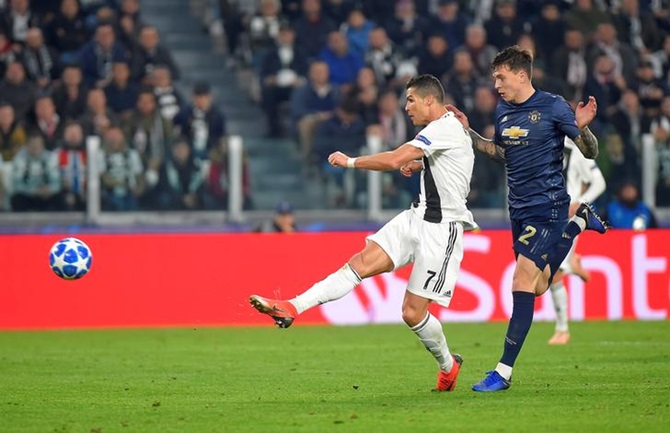 Juve’s dominant performance at Old Trafford two weeks ago appeared to underline the current gulf in class between the two European greats, which was also reflected in their respective domestic results: Juve are riding high, six points clear at the top of Serie A, while United are seventh in the Premier League.

Juve began strongly and almost went ahead when Sami Khedira side-footed a cross from Ronaldo against the far post.

The Italian champions again struck the woodwork in the second half when Paulo Dybala clipped the crossbar from outside the area, and there was more than an air of inevitability about Ronaldo’s deadly volley, created by a classy chipped pass from Bonucci, which broke the deadlock.

This time there was to be no muted celebration from the Portuguese who lifted his shirt to flex his chest muscles before high-fiving team mates.

He could hardly have envisaged the stirring comeback his old side would later conjure, which ended with Mourinho being booed off the pitch after appearing to taunt the home fans. 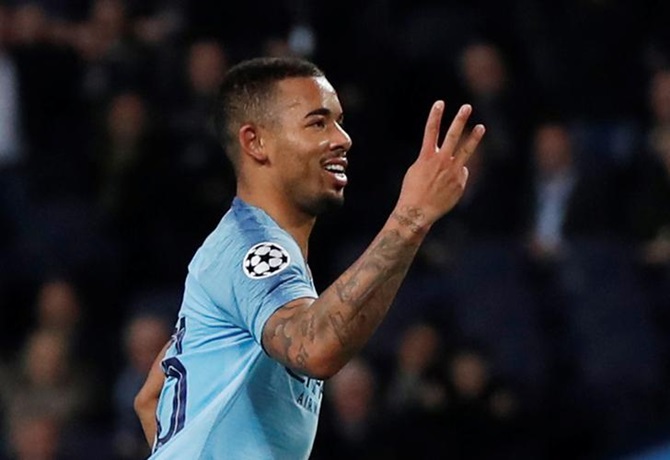 Gabriel Jesus hit a hat-trick, including two penalties, as Manchester City marched closer to the knockout stage of the Champions League after crushing Ukraine’s Shakhtar Donetsk 6-0 at the Etihad Stadium on Wednesday.

The result left City within a whisker of the last 16, as Group F leaders with nine points, three ahead of second-placed Olympique Lyonnais who drew 2-2 with Hoffenheim.

The Germans are third on three points, while Shakhtar are bottom on two and City will book their place in the next round with a win or a draw in Lyon on Nov. 27.

“Unfortunately we haven’t qualified, but we are so close and will try to maintain this level. Maybe it will help keep us focused,” said City manager Pep Guardiola.

The Spaniard’s team are simply destroying opponents at the moment and have scored 19 goals in their past four home games in all competitions.

Even with Argentine striker Sergio Aguero left on the bench and midfield playmaker Kevin de Bruyne injured, they were simply too strong for Shakhtar.

Riyad Mahrez created the 13th-minute opener, toying with the Shakhtar defence before his low ball, across the face of goal was turned in by skipper David Silva.

Guardiola’s side, who enjoyed a 6-1 win on Sunday over Southampton in the Premier League, doubled their advantage in the 24th minute after a comical penalty award that left the visitors shaking their heads in disbelief.

Raheem Sterling burst into the penalty area and went down, without any contact or even a challenge, after driving his foot into the ground, as he attempted a chip. Hungarian referee Viktor Kassai could not have seen the incident clearly as he awarded the spot-kick and Brazilian Jesus slotted home.

Both managers said after the game that the referee had made a mistake, with Shakhtar boss Paulo Fonseca laughing as he described the decision as “ridiculous”.

Sterling said he had apologised to the official, but while he may be embarrassed to watch that replay on television, he will take great pleasure from what came next.

The England winger scored a brilliant third after leaving two Shakhtar defenders standing as he flew out of midfield and then beat Andriy Pyatov with a superb shot into the corner.

Jesus added the fourth in the 72nd minute, again from the penalty spot, after Taras Stepanenko brought down David Silva in the box before Mahrez finished off a well-worked counter-attack six minutes from the end.

Mahrez then set up Jesus for his hat-trick, a perfect through ball allowing the Brazilian to deliver a deft chip over Pyatov and into the goal. 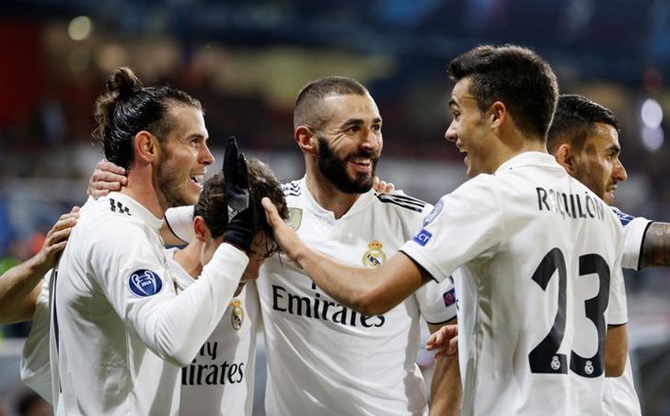 Real Madrid took a huge step towards clinching a spot in the Champions League knock-out stage with a 5-0 rout of Viktoria Plzen as Karim Benzema scored two of four first-half goals for the Spanish giants.

In temporary coach Santiago Solari’s first Champions League game in charge Real began slowly but were out of sight before hal-ftime after a masterclass of finishing.

Benzema opened the scoring in the 20th minute when he beat two defenders before slipping a shot through the legs of Plzen goalkeeper Ales Hruska.

Casemiro doubled the lead three minutes later when the Brazilian outjumped his marker and headed home from a corner.

An unmarked Benzema notched his second goal in the 37th minute with a redirected header assisted by Gareth Bale to give Real a 3-0 lead and Benzema returned the favour minutes later when he flicked on a cross for Bale to sweep home a volley.

Toni Kroos completed the scoring in the 67th minute when he cooly chipped over the keeper after a counter-attack involving Brazilian substitute Vinicius.

With two games remaining in Group G Real Madrid are in second spot, level on nine points with AS Roma who beat CSKA Moscow 2-1. CSKA have four points with Plzen on one.

Real had an early scare in the 10th minute when Patrik Hrosovsky’s cross cannoned off Nacho and hit the woodwork.

But any hopes Plzen harboured of a shock win were wiped out with two quickfire goals in the 21st and 23rd minutes.

The hosts were more lively after the break and managed a few shots on goal but could not find the quality they needed in the final third to chip away at Real’s lead.

Madrid beat Plzen 2-1 at home last month 2-1 with Julen Lopetegui at the helm before the former coach was sacked three months into his first season in charge after Real were thrashed by arch-rivals Barcelona. 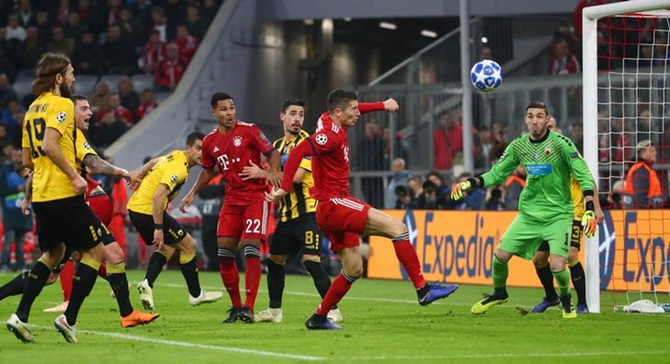 Bayern Munich forward Robert Lewandowski scored once in each half to give his team a 2-0 victory over AEK Athens in the Champions League that put them two points clear at the top of Group E with two matches left.

Lewandowski scored a 31st-minute penalty and added another in the 72nd with a volley at the far post as the Bavarians got a much-needed confidence boost ahead of their Bundesliga match against league leaders Borussia Dortmund on Saturday.

Bayern, who struggled in the first half against a gutsy AEK, are on 10 points, with Ajax Amsterdam on eight after drawing 1-1 against Benfica.

The Greeks made the better start and Vasilis Lampropoulos’ glancing header in the fifth minute sailed just wide of Manuel Neuer’s post.

AEK valiantly stood their ground for 30 minutes but a 31st-minute penalty for a foul on Lewandowski allowed the striker to score the opener.

Leon Goretzka almost scored for Bayern 10 minutes after the restart but his point-blank header was pushed over the bar by AEK keeper Vasilis Barkas.

The keeper then denied Lewandowski in a one-on-one as Bayern pressed hard for a second goal that would kill off the game.

They were rewarded in the 72nd minute when Joshua Kimmich whipped in a corner and Lewandowski was left unmarked to volley in at the far post after a flick-on. 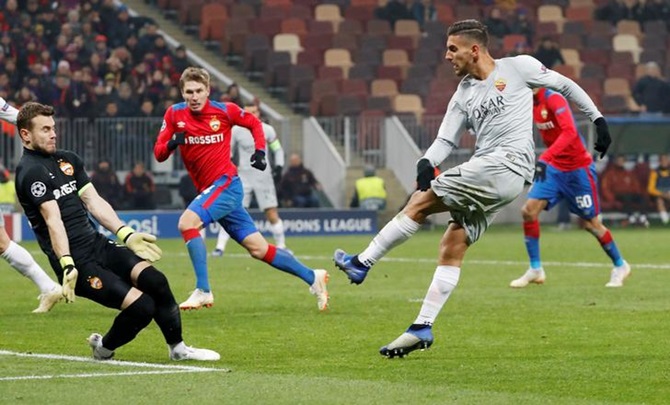 AS Roma put themselves on the brink of a place in the Champions League knock-out stage when Lorenzo Pellegrini's first goal in the competition gave them a 2-1 win at 10-man CSKA Moscow on Wednesday.

The game was settled in a four-minute spell in the second half when CSKA, having just made it 1-1, had Hordor Magnusson sent off and Pellegrini grabbed a fortuitous winner for the Serie A side.

Roma, who completed a double over the Russian side in Group G, have nine points from four games while CSKA have four. Real Madrid (six points) were away to Viktoria Plzen (1) later on Wednesday.

Roma, semi-finalists last season, went ahead through Kostas Manolas' header in the fourth minute, and Alessandro Florenzi and Edin Dzeko wasted chances to put them further ahead before the break.

CSKA sounded a warning just before halftime when Georgi Shchennikov headed over with the goal at his mercy.

They levelled six minutes after the restart when Ilzat Akhmetov burst into the penalty area and found Arnor Sigurdsson, and the Icelandic teenager fired past Robin Olsen.

Bryan Cristante's mishit shot landed at the feet of Pellegrini and the 22-year-old, who has already provided three assists in the group, beat Igor Akinfeev from a narrow angle as the CSKA defence claimed offside.

© Copyright 2020 Reuters Limited. All rights reserved. Republication or redistribution of Reuters content, including by framing or similar means, is expressly prohibited without the prior written consent of Reuters. Reuters shall not be liable for any errors or delays in the content, or for any actions taken in reliance thereon.
Related News: CSKA Moscow, AS Roma, Real Madrid, Juventus, Shakhtar Donetsk
SHARE THIS STORYCOMMENT
Print this article 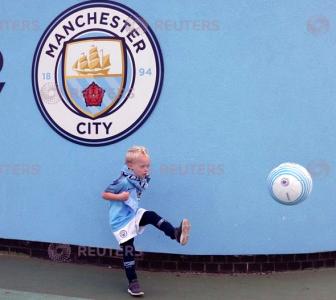 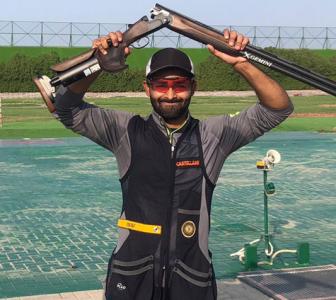 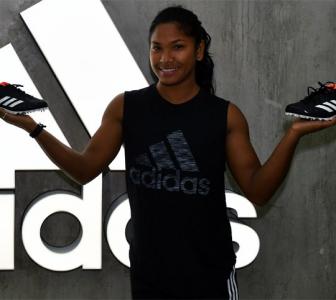 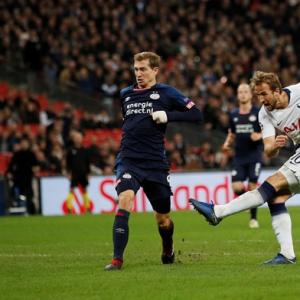 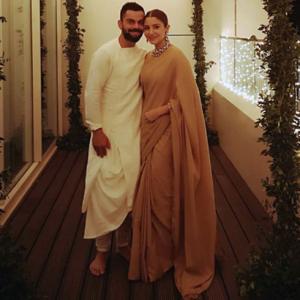