The win was well-deserved. At one stage, Polii hit the shuttlecock so hard that a string on her racket broke and she had to dash off to swap it for another one while the point was still in play.

Indonesia have never won a gold medal in women's doubles, an event China has previously excelled in.

"People said, 'You're not going to make it because Indonesia doesn't have a history in women's doubles," said a sobbing Polii, 33, whose Olympic dream began two decades ago.

Polii and Rahayu clutched each other after the win, crying while singing the national anthem underneath their masks as the Indonesian flag was hoisted.

In a moment of touching camaraderie, they invited the silver and bronze medallists to squeeze onto the podium for a picture.

Lee Sohee and Shin Seungchan were unable to recover from a tough first game despite doing much better in the second, and lost 21-10, 21-17.

"Since we know each other very well, we tried to pretend this was practice not the real match so that we didn't feel nervous," Kong said.

The men's singles finals will be held later on Monday between world number two Viktor Axelsen of Denmark and China's Chen Long, the champion from the 2016 Rio Games.

© Copyright 2021 Reuters Limited. All rights reserved. Republication or redistribution of Reuters content, including by framing or similar means, is expressly prohibited without the prior written consent of Reuters. Reuters shall not be liable for any errors or delays in the content, or for any actions taken in reliance thereon.
Related News: Greysia Polii, Chen Qing Chen, Jia Yi Fan, Apriyani Rahayu, Musashino Forest Sport Plaza
COMMENT
Print this article 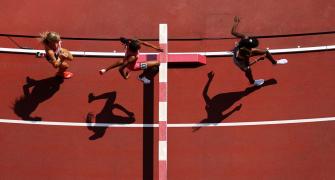