FIFA's former director of international relations Jerome Champagne has suggested changes in the world governing body to help end a perception it is run by self-interested men who do not care enough about the game.

The erudite 53-year-old Frenchman, who left FIFA suddenly two years ago, has now broken his silence since his unexpected departure from his role as one of president Sepp Blatter's chief advisors.

Widely respected and influential in elite soccer circles, Champagne circulated a detailed 20,000-word report to each of FIFA's 208 member associations on Monday.

It examines how many of soccer's current ills developed; how FIFA spiralled into recent crises and how it can evolve into a more effective body. Champagne has made 11 recommendations to improve the game, including changes at the top.

"I am speaking as a citizen of world football and it has given me no joy to see the troubles that FIFA has faced over the last year or so." Champagne said. 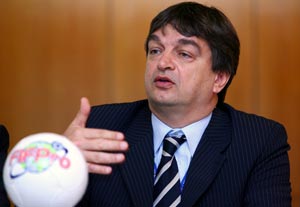 "But after my 11 years with FIFA I think I have something to contribute to the debate and to stimulate it, while recognising that no one has all the answers."

Champagne said the red danger lights were flashing in many areas and stressed there has been a loss of trust in soccer.

"Over the last 20 years there has been a globalisation of football which has been only loosely regulated and which has dramatically increased the inequalities in the game and stimulated a decrease in the uncertainty of the game's results."

As is to be expected from a former diplomat, Champagne retains a balanced view of the world game, and highlights many positives in his report. The game, he says, is still expanding, 80,000 amateur matches are played each week in Germany for example, and stadiums have improved.

But he identifies many wrongs, starting at the top where he said one of the key problems that should be addressed is that the FIFA president and his executive committee are elected by different voting procedures which leads to conflict at the heart of the decision-making process.

He suggests a radical overhaul of the voting procedure with more power vested in the president's position -- something which could benefit the new president who will succeed Blatter in 2015.

"They key issue here is for the president to have an executive committee who back him, for a president and executive to share the same vision, so that modernising reforms and other ideas are implemented and not blocked."

He also proposes increasing the executive committee from 24 seats to 31 with future seats open for direct representation for the clubs, women and players.

"The world has changed and FIFA must adjust to reflect these changes better," he said.

"In essence, FIFA's role, defined when it was formed in 1904, is exactly the same 108 years later. It remains the guardian of world soccer.

"It was based on the British model of doing things in the 19th century, but considering all the challenges it is facing in the modern world, new measures are necessary for it to remain relevant in the 21st century. That is what FIFA is all about, rather than serving personal ambitions or rivalries between institutions."

© Copyright 2021 Reuters Limited. All rights reserved. Republication or redistribution of Reuters content, including by framing or similar means, is expressly prohibited without the prior written consent of Reuters. Reuters shall not be liable for any errors or delays in the content, or for any actions taken in reliance thereon.
Related News: FIFA, Sepp Blatter, Germany
COMMENT
Print this article
Brazil opens anti-racism drive, targets Blatter remarks
Switzerland threatened with FIFA suspension