'He shouldn't get obsessed about anything, just plan and play well' Lakshya Sen will be scrutinised and studied more after his sensational run at the All England Championship and the young shuttler would need variations in his game from the back of the court to stay ahead, reckons his mentor and former India coach Vimal Kumar.

A product of the Prakash Padukone Badminton Academy (PPBA) in Bengaluru, Sen has been in incredible form in the last six months.

He claimed a maiden bronze at the World Championships, secured the India Open title in January before finishing second best at both the German Open and All England Championships.

"I am happy with his tactical acumen, there is considerable improvement. He is calm and dealing with tough situations better. I also see a remarkable improvement in his defence, especially after how he has tackled the attack of Viktor (Axelsen) and Anders (Antonsen)," Vimal said.

"He will now be scrutinised and studied and he will have to cope with all that. Overall, he is going in the right direction but he can attack more from back of court and bring in more variations."

The 20-year-old from Almora had raised hopes of an Indian winning the All England Championship when he stormed into the finals but his dream run at Birmingham ended after he went down in straight games to world number one and Olympic champion Viktor Axelsen on Sunday.

"He is disappointed but he has that spirit. He is very realistic and he knows why he lost. He knows what he needs to improve if he has to beat someone like Axelsen. He understands that he can't feel too bad or be disheartened," said Vimal, who is a head coach at the PPBA in Bengaluru.

Sen was going hammer and tongs in 2019, winning five titles but the COVID-19 pandemic threw spanner in his work. When he returned last year following the break due to second wave of the virus, he was desperate to prove his worth at the international stage.

The Thomas Cup snub where he failed to make it to the Indian team after losing just one match in the trials fuelled his ambition further.

Following the disappointment, he left for a two-week sparring stint with Olympic champion Axelsen.

"It did a world of good to his game. He picked up things from Axelsen and went on his own without a coach to the European circuit and it made him tougher as he managed things on his own," said the 59-year-old, a former two-time national champion.

"One thing about Lakshya is that he is very good in taking instructions and implementing them in the game. We generally give an overall idea but he picks up things and knows what needs to be done."

Sen also had European training stint in October where he trained with the Danish national team, played for Danish club Aarhus and trained at the Peter Gade Academy.

Lakshya had also spent a lot of time picking the brains of Danish former world No. 1 Martin Frost in the last two years when he used to visit Bengaluru. All these time spent with the legends helped him to evolve his game.

A hectic season now awaits him with big-ticket events such as Commonwealth Games and Asian Games lined-up this year apart from the regular BWF World Tour events, including the World Championships and World Tour Finals.

"He shouldn't get obsessed about anything, just plan and play well and don't think much too ahead."

Vimal believes the freedom to choose how, when and where one wants to train will be important for further growth of Sen.

"I don't believe in the thought that one shouldn't train with other top players as they will know your secrets, because there are no secrets," he said.

"And going forward, I would like him to have all the freedom to go and train wherever he wants, whether it is Indonesia, Thailand or Denmark, because that's what elite sports is all about," he signed off. 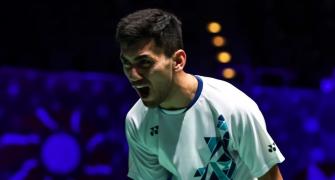 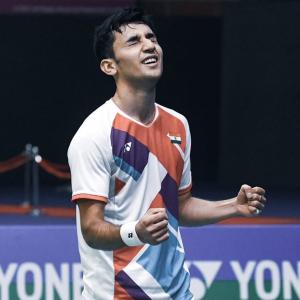