- 'This is not confidence for Wimbledon, this is an important victory for me and I'm happy for that today' 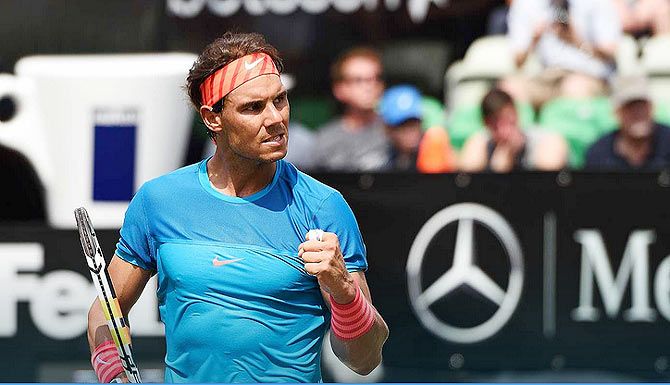 Rafael Nadal claimed his first grasscourt title for five years when he beat Serbian Viktor Troicki 7-6(3), 6-3 to win the Mercedes Cup in Stuttgart on Sunday.

The Spaniard, seeded one, produced some sparkling tennis in the sunshine, serving solidly throughout and snatching the one break point that came his way in the second set.

It was only his second title of a disappointing year and Nadal looked delighted with his form after his early French Open exit.

"Since 2011, I didn't play a final on grass, so finally to win a title again after five years on grass is very good news for my game, for my mentality too and at the same time is another title," said Nadal, who now has 66 career titles.

"At this point of the season for me, every victory is important, every title means a lot to me. This is not confidence for Wimbledon, this is an important victory for me and I'm happy for that today."

There was precious little between the players in the first set as eighth seed Troicki stayed with Nadal.

The Serb did little wrong other than fail to convert the one break point opportunity he was offered.

Nadal, whose last grasscourt title came at Wimbledon in 2010 -- the second of his titles at the All England Club, broke for a 4-1 lead in the second set and cruised to the title in one hour 27 minutes, picking up 104,000 euros ($116,740) and a gleaming yellow Mercedes sports car for his trouble.

Eyeing the car with a degree of envy, Troicki said: "I hope maybe they will give me a toy one at least."

Nadal will now continue his preparations for Wimbledon at the Aegon Championships at London's Queen's Club next week.

© Copyright 2022 Reuters Limited. All rights reserved. Republication or redistribution of Reuters content, including by framing or similar means, is expressly prohibited without the prior written consent of Reuters. Reuters shall not be liable for any errors or delays in the content, or for any actions taken in reliance thereon.
Related News: Rafael Nadal, Serbian Viktor Troicki, Queen, All England Club, Aegon Championships
COMMENT
Print this article