African continental champions South Africa prevailed 3-1 over Argentina to win the bronze medal in the Champions Challenge hockey tournament in Johannesburg on Sunday.

This is the highest position for South Africa in the Champions Challenge since winning the title in 2005 that took them to the elite Champions Trophy the following year.

A 68h minute goal by Lloyd Norris-Jones settle the contest for South Africa, whose citadel was under intense pressure from Pan-American champions Argentina late in the second session as they went all out seeking an equaliser.

South Africa dominated the third-place playoff, overcoming the disappointment of a semifinal loss to India, which keeps their Olympic qualification in limbo despite winning the gold medal at the All-Africa Games.

The country's Olympic committee, which does not feel that the African continental championship provided quality competition, had laid down the condition that South Africa should qualify for the final of the Champions Challenge or play in the Olympic Qualifier.

South Africa today opened the scoring in the 18th minute through a penalty corner strike by Justin Reid-Ross, who sounded the boards with a low flick.

Argentina, the top-ranked team in the tournament, equalised in the 22nd minute as Lucas Hernan Cammareri deflected a long-range diagonal shot.

South Africa were ahead again within three minutes with Taine Paton capping a pressing move to shoot on target and giving the hosts a 2-1 lead at the interval.

The ball moved from one end to the other frequently in the second session until Norris-Jones sealed the result by stretching the lead and putting the match beyond Argentina .

Earlier, Malaysia secured the fifth spot, posting a 3-0 victory over Poland with Tengku Ahmed scoring twice in open play in the 17th and 47th minutes.

Young star Faizal Saari chipped in with a flash goal in the 29th minute.

In the playoff for the seventh position, Japan gave a fine exhibition of open play, scoring five field goals in their 7-2 drubbing of Canada, who on seeding were expected to make the semifinals of the tournament but finished last in the eight-nation tournament.

Japan rode on two goals each from Toshiro Tachibana and Genki Mitani to outplay Canada.

Japan's other goals came from Koji Kayukawa, Kenta Taaka and  Katsuyoshi Nagasawa, while Canada pulled two back through Scott Tupper and Phlip Wright. 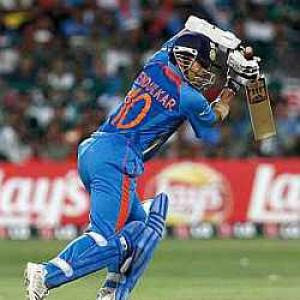