Soccer PIX: PSG celebrate eighth title as Neymar gets back Neymar made his return to the pitch after a three-month injury lay-off as Paris St Germain celebrated their eighth Ligue 1 title with a 3-1 win against Monaco at the Parc des Princes on Sunday.

The Brazil striker played the whole second half in his first appearance since Jan. 23, but it was Kylian Mbappe who shone with a hat-trick to put PSG on to 84 points with five games remaining.

PSG, who had picked up only one point from their last three games, enjoyed a celebration night after officially being crowned earlier on Sunday when second-placed Lille, now 19 points behind on 65, were held to a goalless draw at Toulouse.

The runaway champions can clinch a domestic double when they take on Stade Rennais in the French Cup final next Saturday.

"We played a good, solid game even if we are not in our best period," said coach Thomas Tuchel, who also welcomed back Edinson Cavani after the Uruguay striker had missed more than two months of competition through injury.

Marco Verratti, however, could miss the Stade de France showdown after he picked up a possible ankle injury 15 minutes from time.

'Notre Dame' replaced the players' names on the back of the PSG shirts, while an image of the cathedral was printed on the front -- an emotional touch at the end of a week scarred by the fire that had ripped through Paris's beloved monument.

Mbappe opened the scoring in the 15th minute after a one-two with Moussa Diaby and doubled the tally eight minutes before the interval after another fine one-two, this time with Dani Alves.

Mbappe tapped in from Alves' cross to become the first French player to score 30 goals in the French top flight since Jean-Pierre Papin in 1990.

Aleksandr Golovin reduced the arrears 10 minutes from time when he took advantage of some loose defending to beat Alphonse Areola from just inside the box.

Monaco, the only team to break PSG's domination as champions in the last seven years back in 2017, were left in 16th place on 32 points, six above the relegation zone.

Earlier, Lille dominated at Toulouse but had a Thiago Mendes goal disallowed on the hour and never managed to break the deadlock.

The top three qualify for the Champions League with the third-placed team having to go through the third qualifying round to take part in the group stage. Undefeated PAOK secured their first Greek league title in 34 years with a game to spare after crushing Levadiakos 5-0 on Sunday.

Thessaloniki-based PAOK also became the first non-Athens team to win the league title since Larissa did it back in 1988.

The hosts, in front of a fiery crowd at their Toumba stadium, kicked off proceedings early with Yevhen Shakhov tapping in from close range in the third minute.

Diego Biseswar made it 2-0 with a chipped penalty in the eighth and Fernando’s darting header in the 53rd triggered wild celebrations in the stands, with fans lighting dozens of flares.

Shakhov added a fourth on the hour and Karol Swiderski completed the rout nine minutes from time to make sure Romanian coach Razvan Lucescu’s team stays unbeaten in a near-flawless campaign.

They are on 77 points, with second-placed Olympiakos on 72 and one game left in the season.

Thousands of PAOK fans celebrated the expected title win a day early on Saturday with a march along the northern city’s promenade.

They started pouring onto the streets on the final whistle on Sunday to celebrate the club’s third league title and their first since 1985. 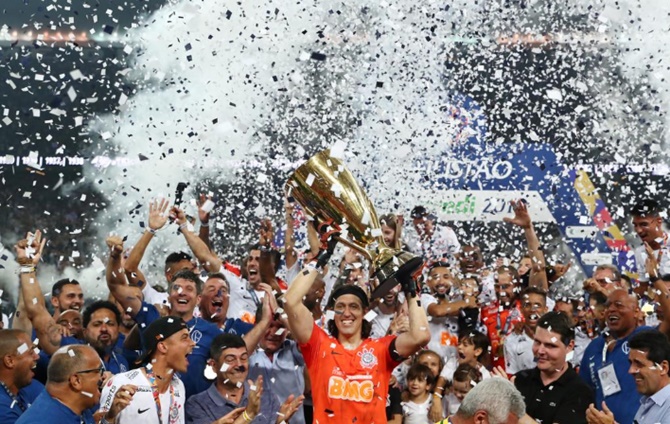 A late goal from Wagner Love gave Corinthians a 2-1 win over Sao Paulo on Sunday, securing their third consecutive state championship in front of a record crowd at the Corinthians arena.

Danilo Avelar put the home side ahead after 31 minutes with a close-range header after Sornoza’s corner had been headed back across goal.

Antony equalised in first half stoppage time with a low drive from the edge of the box but former Brazil striker Love sent the 46,903 fans into raptures with a winner two minutes from time.

The win guaranteed the home side a 2-1 aggregate victory after the city rivals drew the first leg 0-0 last Sunday at Sao Paulo’s Morumbi stadium.

It was the first time Corinthians have won the title three times in a row since 1939 and extended Sao Paulo’s winless streak in the tournament to at least 15 years, one of the longest droughts in the club’s history.

A brilliant double from Goncalo Guedes saw Valencia move into fifth place in La Liga as they recorded an impressive 2-1 victory at Real Betis on Sunday to move into closer contention for the fourth and final Champions League place.

Guedes struck almost identical efforts from outside the box either side of halftime to move Marcelino’s side on to 52 points, leapfrogging Betis’s local rivals Sevilla in the process.

Valencia, who have lost just one of their last 22 games in all competitions and have reached the semi-finals of the Europa League and Copa del Rey, were good value for the victory even though they ended with 10 men after the dismissal of Rodrigo.

They caused their hosts numerous problems throughout an entertaining first half that saw both teams share the chances until Guedes produced a brilliant breakthrough moment with stoppage time almost complete.