Double Olympic medallist badminton ace PV Sindhu and Indian men's hockey team captain Manpreet Singh were on Wednesday named the country's flagbearer for the opening ceremony of the Commonwealth Games to be held in Birmingham on Thursday.

While Sindhu's name was announced from a shortlist of three athletes, the Indian Olympic Association (IOA) added Manpreet as the second flagbearer after being informed by the organisers that two flagbearers -- one male and one female -- was a must for each nation.

Manpreet had led the Indian men's hockey team to a bronze medal at the Tokyo Olympics last year.

"The decision to name Mr Singh as the second Flagbearer for the said occasion was arrived at after the IOA was intimated by the Birmingham 2022 Commonwealth Games Organising Committee that two Flagbearers -- one male and one female -- must be named by each nation for the Opening Ceremony," IOA said in a release.

Olympic champion Neeraj Chopra, who was also the defending champion in the Commonwealth Games having won the gold in Gold Coast four years ago, was expected to be the flag-bearer.

But a groin injury following his silver medal at the World Championships forced him to pullout and the Indian Olympic Association picked Sindhu to be the flagbearer from a three-member shortlist.

Tokyo Olympics medallists -- weightlifter Mirabai Chanu and boxer Lovlina Borgohain are the other two athletes, who were also considered before IOA decided to go for Sindhu.

"It's a great honour to be bestowed with the responsibility to lead the contingent and hold the flag at such an august gathering. I am extremely happy and I wish all my fellow contingent all the best for the Games. I would like to thank IOA also for choosing me as the Flag Bearer," Sindhu said.

"Mr Manpreet Singh ended Indian hockey's 41-year Olympic medal drought with a bronze at the Tokyo Olympics last year. He is one of the finest athletes to have ever represented India on the international stage," acting IOA president Anil Khanna said.

"We are delighted to name him and Ms Sindhu as the two Flagbearers, who will lead the Indian contingent out at the Parade of Nations tomorrow during the Opening Ceremony of the Birmingham 2022 Commonwealth Games."

Sindhu was also the flagbearer at the 2018 Commonwealth Games in Gold Coast, while Manpreet was one of the flagbearers for India at the opening ceremony of Tokyo Olympics.

The 2022 edition of the Commonwealth Games has the largest contingent of female athletes in the history of the Games.

Team India Chef de Mission at Birmingham, Bhandari said a maximum of 164 participants can take part from the Indian contingent in the Parade of Nations in the Opening Ceremony.

"The count of 164 will include athletes and team officials. The final list will be drawn up by this evening, gauging the availability of the athletes," Bhandari said.

A total of 215 athletes from India will be competing at the Commonwealth Games. 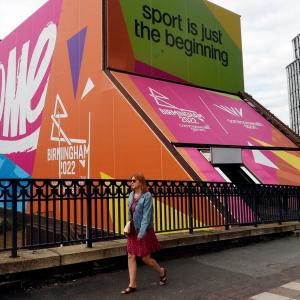