Jitu Rai clinched the gold medal with yet another stirring comeback while compatriot Amanpreet Singh bagged the silver in men's 50m pistol event as India secured its first yellow metal in the ongoing ISSF World Cup, in New Delhi, on Wednesday.

Entering the event a day after claiming the 10m pistol bronze, Rai upped the ante as the final closed in on the elimination rounds.

The unassuming Army man shot a total of 230.1, a world record, to finish on top of the podium, while Amanpreet, who was leading for a major part of the final, had to be satisfied with the silver medal after aggregating 226.9. 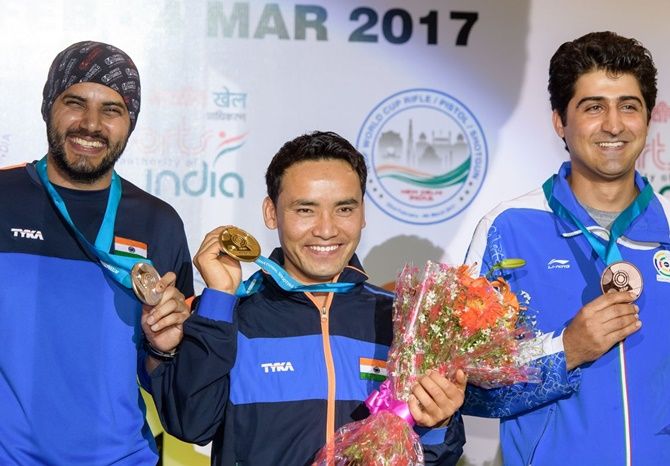 Iran's Vahid Golkhandan took away the bronze with a score of 208.0 at the Dr Karni Singh Shooting Range.

The 29-year-old Rai was placed sixth at the end of the first two competition series of five shots each with 93.8. At that point Amanpreet was leading the eight-man field with 98.9. The Punjabi shooter then extended his domination with a series of high scores, even as Rai tried to make his way back into contention.

A stunning 10.8 in one of the elimination rounds proved to be crucial for Rai, who jumped from sixth to the third position, and knocked out Kazakhstan's renowned marksman Vladimir Issachenk with a 10.5.

Rai kept up the tempo with a 10.4 and 10.0, while Amanpreet, after a fine start in his career's first World Cup final, had a meltdown. 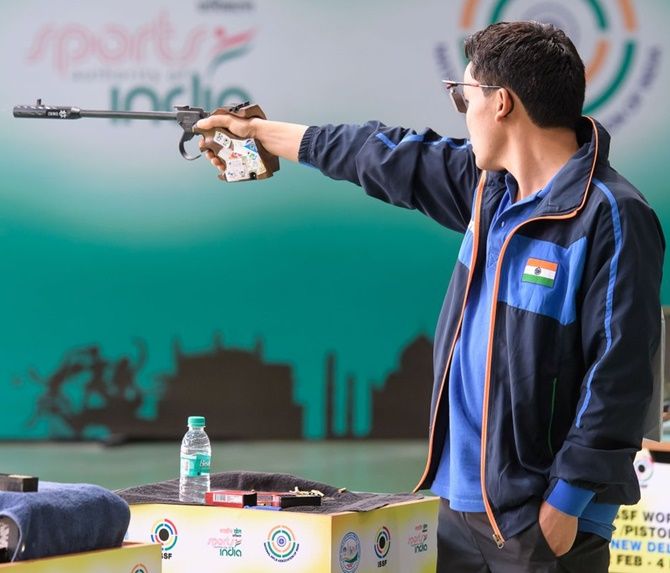 After upstaging Golkhandan, Rai comfortably got the better of Amanpreet in the gold medal round, finishing the event with an excellent 10.5 to lay his claim on the top prize.

"It's amazing to win this gold medal here during the first combined World Cup held in India, in front of my supporters. It's a great honour and a true emotion to see the Indian flag flying high," said Rai.

“I didn't have a perfect start today, but I guess that's the fun of the sport. I like it that way, uncertainty is part of the game, otherwise there is no excitement. I climbed into the lead shot after shot and I think it was a nice match," he said.

"I closed the 2016 season with a World Cup final silver, and I always dreamt about starting 2017 in the best way here in India. I wanted our flag to fly high.

"I am planning to compete in all World Cup stages this year. We have ISSF World Cup in Munich ahead of us, and I will work to correct a few things before flying there. I am looking forward to the rest of the season," Rai signed off. 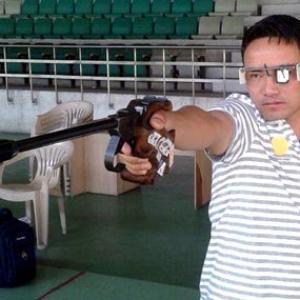