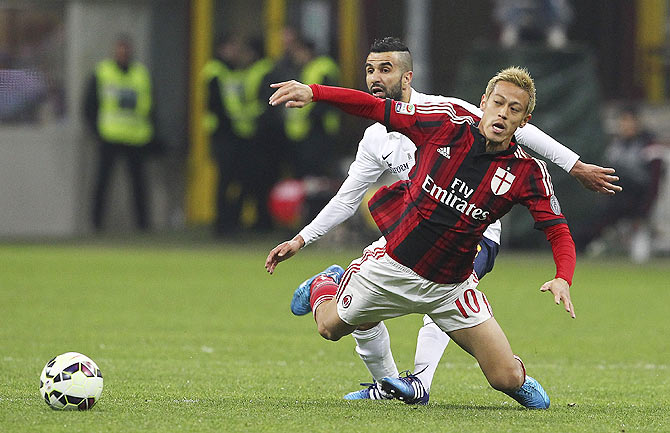 Keisuke Honda of AC Milan is challenged by Mounir Obbadi of Hellas Verona FC during the Serie A match at Stadio Giuseppe Meazza in Milan on Saturday. Photograph: Marco Luzzani/Getty Images

AC Milan's troubles continued when they conceded an equaliser in the fifth minute of stoppage time and were held 2-2 by modest visitors Verona in Serie A on Saturday.

Former Cameroon striker Samuel Eto'o opened his Sampdoria account with a stunning strike in a 2-0 home win over Cagliari which pushed Gianfranco Zola's side a step closer to Serie B.

Milan have won two out of 10 games since Christmas, leading to speculation that coach Filippo Inzaghi, who surprisingly dropped forward Mattia Destro, could be fired before completing a season in the job.

Luca Toni, 37, put Verona ahead in the 18th minute, coolly converting a Panenka-style penalty for his 11th goal this season after Artur Ionita was clumsily tripped by Sulley Muntari.

Jeremy Menez equalised for Milan with another penalty, his 13th goal of the campaign, four minutes before halftime after a trip on Philippe Mexes, although the Frenchman appeared to fall over the ball rather than a defender's leg.

Milan went ahead soon after the restart when Mexes pounced on a loose ball and his effort from a narrow angle was turned into his own goal by Panagiotis Tachtsidis.

But the hosts sat back and suffered two huge let offs as Tachtsidis rattled a shot against the underside of the bar and Sulley Muntari's dreadful backpass set up a Verona chance they failed to take.

But there was no escape when Juanito Gomez headed the ball into the path of Nico Lopez and the "rabbit" steered his shot wide of Diego Lopez, leaving Milan joint ninth with 35 points.

Sampdoria's Eto'o broke his duck when he collected a pass on his chest, turned, let the ball bounce and then rifled an unstoppable shot into the net from a difficult angle for his first goal since his move from Everton in January.

His 72nd minute goal put the game out of Cagliari's reach after Lorenzo De Silvestri opened the scoring for Sinisa Mihajlovic's team by heading home from a corner in the 33rd.

Cagliari have taken one point from their last six games and an unhappy evening was completed when Danilo Avelar was sent off for a second yellow card.

The future of former West Ham United coach Zola, who took over in December, is being questioned at a club who are in the lsat relegation position in 18th place with 20 points from 26 games, three adrift of the safety zone.

Sampdoria are joint fifth with Fiorentina on 42 and points chasing a Champions League qualifying spot.

© Copyright 2020 Reuters Limited. All rights reserved. Republication or redistribution of Reuters content, including by framing or similar means, is expressly prohibited without the prior written consent of Reuters. Reuters shall not be liable for any errors or delays in the content, or for any actions taken in reliance thereon.
Related News: AC Milan, Hellas Verona FC, Sampdoria, Sulley Muntari, Cagliari
SHARE THIS STORYCOMMENT
Print this article 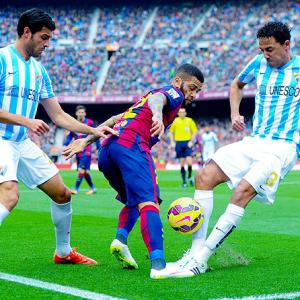