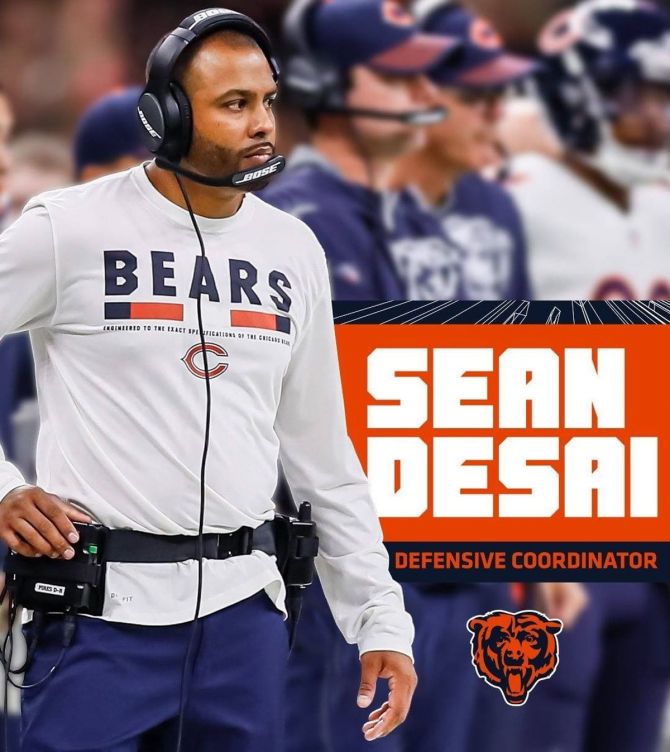 He replaces Chuck Pagano, who announced retirement after 36 years in coaching.

"We are very fortunate and excited to promote from within and announce Sean Desai has been named defensive coordinator for our football team," Chicago Bears coach Matt Nagy said in a statement.

"He is a person of high football intelligence, extremely detail-oriented, has a very strong work ethic and I cannot think of someone more deserving to lead our defense. Sean is a family man of high character and the respect he has within our building from coaches, players and staff is unparalleled," Nagy said.

"I am excited for what this means for the Bears' chances next year, but also its significance to the league and to the countless young people aspiring to follow in Sean's footsteps," Krishnamoorthi said.

According to Chicago Bears, Desai began his coaching career at Temple, his alma mater, in 2006, serving as a defensive assistant and special teams coach for five seasons.     As special teams coordinator in 2010 at the age of 27, he was one of the youngest coordinators in college football.

Desai was assistant director of football operations at the University of Miami (Fla.) in 2011 before spending the 2012 season as running backs coach and special teams coordinator at Boston College.

He earned his doctorate in educational administration, with an emphasis in higher education, at Temple in May 2008, serving as an adjunct professor at the school in 2009 and 2010, teaching in the master's and doctoral programs in education administration, Chicago Bears said.