Manchester United were crowned champions of England for a record 19th time on Saturday when a Wayne Rooney penalty earned them a 1-1 draw at Blackburn Rovers and the point they needed to win the Premier League title.

It was a nervous afternoon for United after they fell behind when Brett Emerton struck for Blackburn after 20 minutes. Rooney equalised for United with a 73rd minute penalty.

The spot-kick was awarded after referee Phil Dowd consulted with a linesman after Blackburn keeper Paul Robinson appeared to clatter Javier Hernandez sending him sprawling.

After some lively arguments from both sets of players, Rooney sent Robinson the wrong way from the spot to seal United's 12th title since the Premier League began in 1992-93 and the 19th in total, surpassing the record they have shared with Liverpool for the last two seasons. 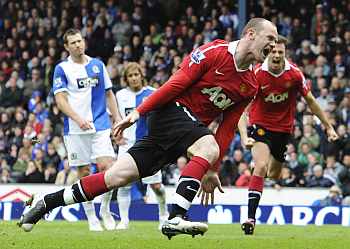 United have 77 points from their 37 matches, while Chelsea have 70 with two to play.

For the first time since 1951 top division games were played on the same day as the FA Cup final but although relegation-threatened Blackpool, Blackburn Rovers and Wolverhampton Wanderers were all in action, the results proved inconclusive as far as relegation was concerned.

Blackpool won a thriller 4-3 against Bolton Wanderers but remained in the bottom three as Wolves won 3-1 at Sunderland.

Blackburn's 1-1 draw with United kept them one point above the drop zone while in the other match West Bromwich Albion beat Everton 1-0.

Saturday's results mean that bottom-placed West Ham United, who play at second-from-bottom Wigan Athletic on Sunday, are almost certainly down, but still have a mathematical chance of avoiding the drop.