News
Business
Movies
Sports
Cricket
Get Ahead
Money Tips
Shopping
Sign in  |  Create a Rediffmail account
Rediff.com  » Sports » 'I was on the right side and confident of getting justice' 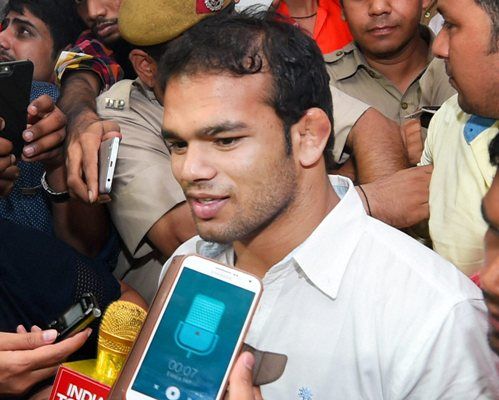 A relieved Narsingh Yadav has said he is eager to go to the Olympics now and win a medal for the country.

"I am very happy and I am hopeful of winning a medal at the Olympics. Truth has won. This will ensure that nothing like this happens with any other player. It is a huge win," Narsingh said.

"I knew I was on the right side and was confident of getting justice," he added.

Relieved after being exonerated of doping charges by the National Anti-doping Agency (NADA), Narsingh said he is happy to come clean in what seemed to be the "toughest fight" of his life as his sole focus now is standing on the podium during the Rio Games.

"This has been the toughest fight of my life. I want to forget the entire episode now and solely focus on winning a medal at the Olympics," Narsingh said after NADA DG Naveen Agarwal put an end to the suspense on the wrestler's fate by exonerating him.

"Last 15 days have been mentally very very tough for me and my family. But I always believed that I would get justice as I knew that I was on the right side and did not do anything wrong. I have never ever taken anything. I was confident of getting justice.

"That is the reason why I always kept practising and never left my training," he added. The 26-year-old, however, said that anybody behind the sabotage should be punished.

"Anybody who has done anything wrong should be punished so that no one else has to go through something like this," insisted Narsingh. He thanked the Wrestling Federation of India (WFI), the media and his fans for supporting him.

"I am very happy and I am hopeful of winning a medal at the Olympics. Truth has won. This will ensure that nothing like this happens with any other player. It is a huge win," Narsingh said.

"I am really grateful to everyone who from the WFI to media to my countrymen for supporting me and showing so much faith in me. I would be leaving no stone unturned to repay their faith and certainly win a medal for India at the Rio Olympics."

The Wrestling Federation of India (WFI) President Brij Bhushan Sharan Singh said the process to get Narsingh back in the Olympic squad has been set in motion. Narsingh had been replaced by Parveen Rana when the scandal broke out to save India's quota place in the 74kg category.

"To save the country's quota, we sent Parveen Rana's name and told the world body that Narsingh would be sent if he is cleared. Have faith, Narsingh will go to Rio. We had told United World Wrestling (UWW) that once Narsingh is cleared he will replace Parveen Rana," Singh said.

"We are confident that Narsingh will go, the judgement is clear that Narsingh was victim of sabotage. NADA has agreed to this. Narsingh Yadav will go to Rio," he added.

The NADA reached the conclusion after three days of marathon hearings last week during which Narsingh's lawyers argued that the wrestler had been sabotaged by rivals. Narsingh had even filed a police complaint, naming two fellow wrestlers, one of whom is a 17-year-old.