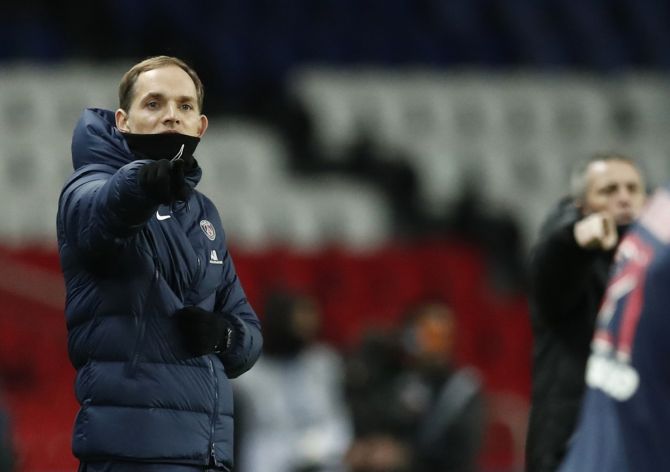 Pembele strikes as PSG keep up with Lyon and Lille 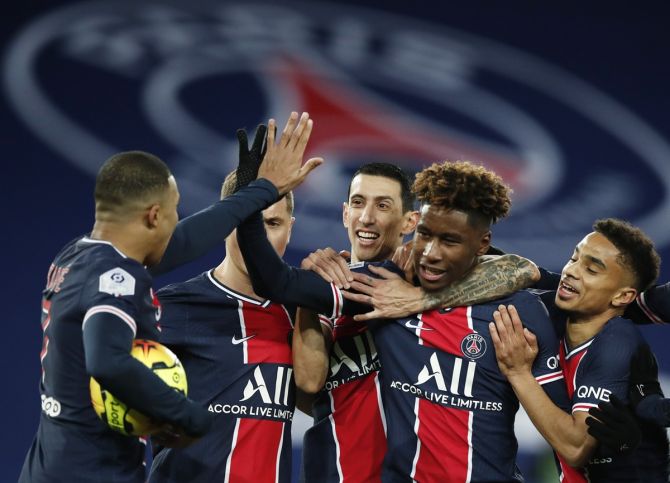 Defender Timothee Pembele scored his first goal for Paris St Germain as the champions earned a 4-0 home win over Strasbourg on Wednesday to keep pace with Ligue 1 leaders Oympique Lyonnais and second-placed Lille ahead of the Christmas break.

Lyon will head into the two-week hibernation on 36 points from 17 games after easing to a 3-0 home rout of Nantes, with Lille behind them on goal difference after a dramatic 3-2 win at eighth-placed Montpellier.

Third-placed PSG stayed a point adrift of the top two after a Kylian Mbappe tap-in followed by an Idrissa Gueye piledriver and an opportunist finish from striker Moise Kean tore Strasbourg apart in the closing stages.

The visitors were forced into submission in the last 10 minutes as Di Maria robbed a Montpellier defender of the ball and squared it to Mbappe, who could not miss an empty net from three metres.

Gueye then hit the bottom right corner with a screaming shot from 30 metres before Kean put the icing on the cake with a shot that cannoned off two defenders on the line into the net as Strasbourg fell apart.

Timothy Weah and a Jonathan Ikone penalty had Lille 1-0 and 2-1 in front while Gaetan Laborde and Andy Delort replied for Montpellier before Yilmaz netted an 87th-minute winner for the visitors.

Olympique Marseille dropped one place down to fifth and lost ground in the title race after a surprise 2-1 defeat at Angers while sixth-placed Monaco were held to a 2-2 draw at 10-man St Etienne, who had Eliot Matazo sent off in the first half.

Sofiane Diop gave the home side an early lead and Kevin Volland salvaged a point for them with a 48th-minute effort after Mathieu Debuchy and Denis Bouanga had turned the tide. 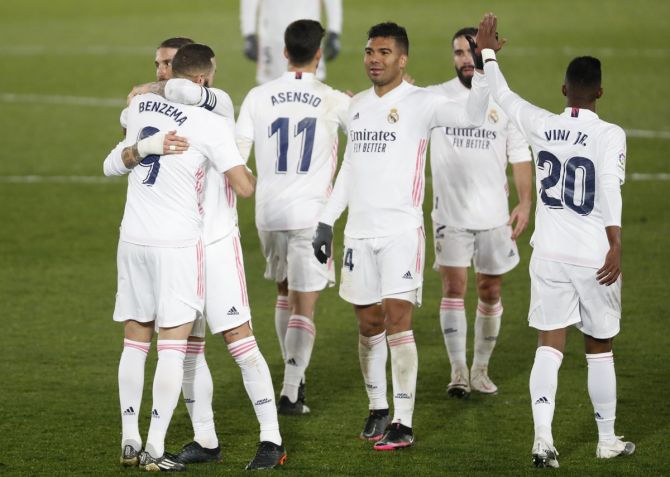 A towering header from Casemiro and an added-time strike from Karim Benzema saw Real Madrid beat a stubborn Granada side 2-0 at home on Wednesday to notch a fifth consecutive La Liga victory and go level on points with leaders Atletico Madrid.

The champions lacked sparkle in the first half but came alive in the second period and after a flurry of chances from the home side, Brazilian midfielder Casemiro powered in a cross from Marco Asensio to give them the lead in the 57th minute.

Real had been lucky to not fall behind in the first minute when Raphael Varane gave away possession and Roberto Soldado found Antonio Puertas, who sent his shot way over the bar.

Granada continued to trouble Zinedine Zidane's side deep into the second half until Benzema raced clear and thumped the ball low into the net to seal the points.

Real have 32 points from 15 games heading into a seven-day break from matches, level with Atletico who are top on goal difference and have two games in hand.

The victory also took Zidane's side six points clear of third-placed Real Sociedad and the title race looks more and more like being a two-horse race between the two rivals from the Spanish capital.

"We want to keep this great run going but we are also looking forward to a rest," said goalscorer Casemiro.

"There's still a long way to go in the season and many more games, and every team will have their ups and downs."

Madrid's Brazilian forward Rodrygo was carried off on a stretcher in the first half and his replacement Asensio almost put the hosts in front in the second half, conjuring an outrageous backheeled volley which struck the far post.

Play continued and Toni Kroos then fired a shot at Granada keeper Rui Silva, who saved well and also kept out the follow up shot from Federico Valverde.

But Real kept up the momentum and soon had the opening goal they craved when Casemiro showed his immense physical prowess to out-jump his marker and get on the end of Asensio's cross.

"The coach always wants the midfielders to get in the opposing area, he is always pushing us to do it," added Casemiro after scoring a fourth goal this season in all competitions.

"He tells me to be a balanced midfielder but to get into the box as much as I can because he says I'm good at heading the ball, so he'll be happy."

AC Milan snatched a stoppage time winner with a Theo Hernandez header to beat Lazio 3-2 at home and stay top of Serie A on Wednesday after the visitors had earlier hit back from two goals behind.

Hernandez scored from a corner in the 92nd minute to leave Milan, still unbeaten this season, top of Serie A with 34 points, one ahead of Inter Milan who earlier won 2-1 at Verona for their seventh successive league win.

Milan had raced to a 2-0 lead in less than 20 minutes through an Ante Rebic header and Hakan Calhanoglu penalty before Luis Alberto pulled one back and Ciro Immobile levelled in the 59th minute.

Milan's win was made all the more impressive as they were missing several key players including talismanic striker Zlatan Ibrahimovic, defender Simon Kjaer and midfielder Ismael Bennacer.

Even so, coach Stefano Pioli played down talk of winning a first Serie A title since 2011 and tiptoed around the subject.

"I continue to keep enthusiasm low for that, Juventus and Inter are the favourites for the Scudetto," he said. "We have to consider the investments made by the respective teams, the history of the players and the championships.

"If the table is still like this in April, we would be thinking differently. Now let's think about winning every match, then we'll see where we can get to."

Rebic put Milan in front in the 10th minute with a looping header from a Calhanoglu cross and the hosts went further ahead seven minutes later. Patric knocked over Rebic in the area, the referee awarded a penalty and Calhanoglu converted.

Lazio were also awarded a penalty following a VAR review after Joaquin Correa was tripped by Pierre Kalulu in the 28th minute. Immobile stepped up and saw his kick saved by Gianluigi Donnarumma but Luis Alberto snapped up the rebound.

Lazio equalised with a trademark goal just before the hour as Sergej Milinkovic-Savic floated a ball over the Milan defence and Immobile met it with an angled volley for his ninth league goal of the season.

Lazio looked capable of winning the game, but instead it was Milan who stole the points as Hernandez continued his excellent season by grabbing the winner with almost the last touch of the game.

© Copyright 2021 Reuters Limited. All rights reserved. Republication or redistribution of Reuters content, including by framing or similar means, is expressly prohibited without the prior written consent of Reuters. Reuters shall not be liable for any errors or delays in the content, or for any actions taken in reliance thereon.
Related News: Paris St Germain, Timothee Pembele, Lyon, Casemiro, AC Milan
SHARE THIS STORYCOMMENT
Print this article 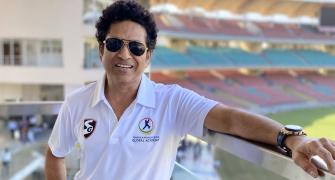 What is Sachin doing at Sevilla FC? 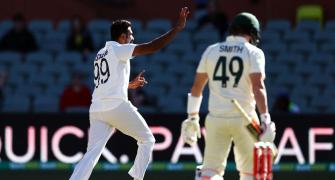 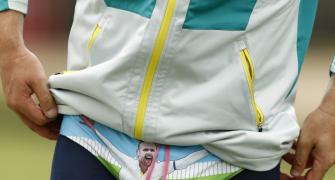 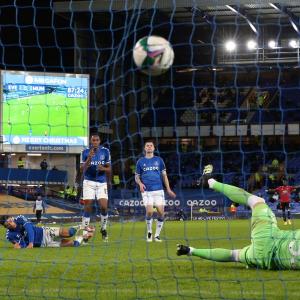 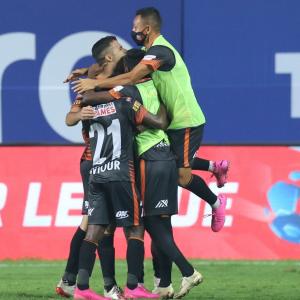