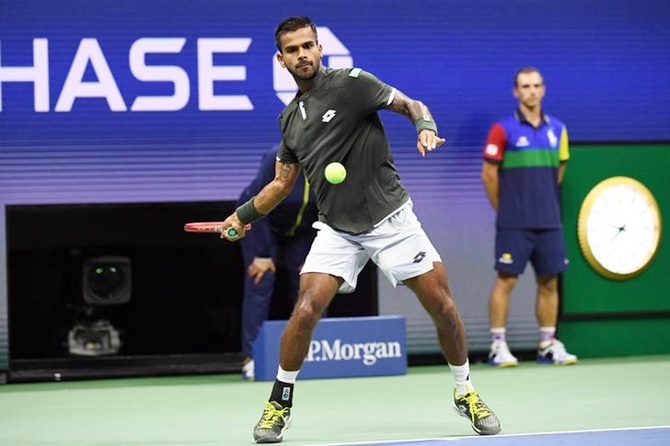 IMAGE: Sumit Nagal returns to Roger Federer during their first round match on Day 1 of the 2019 US Open at the USTA Billie Jean King National Tennis Center. Photograph: Danielle Parhizkaran-USA TODAY Sports/Reuters

India’s Sumit Nagal and Prajnesh Gunneswaran got a taste of high-level tennis in first-round exits from the US Open, in New York, on Monday.

Both fell by the wayside after early promise, the former taking the first set in a 4-6, 6-1, 6-2, 6-4 defeat to No. 3 Roger Federer and the latter to world number five Daniil Medvedev in 84 minutes.

Former junior Wimbledon champion Nagal became the first Indian player to take the first set against 20-time Grand Slam champion Federer. However, that was the best he could do. Since the 2003 French Open, Federer has never lost in the first round at Grand Slam and things went according to script thereafter.

The Swiss ace came back strongly in the second set to simply demolish the Indian qualifier, ranked 190. After committing 19 unforced errors in the opening set he send down 20 winners in the second and was in control thereafter. 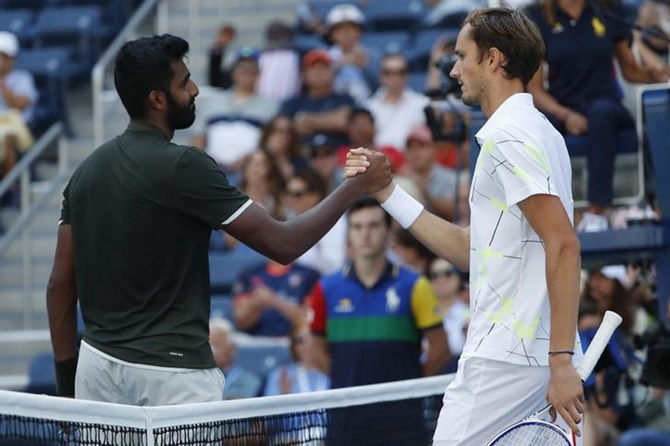 IMAGE: Daniil Medvedev, right, and Prajnesh Gunneswaran meet at the net after their first round match on Day 1 of the US Open. Photograph: Geoff Burke-USA TODAY Sports/Reuters

Earier, the gulf between Prajnesh and Medvedev was apparent as he lost 4-6, 1-6, 2–6 to the Russian, who recently vanquished multiple Grand Slam winner Novak Djokovic.

The Indian left-hander began aggressively but could not maintain intensity after losing the well-fought first set at Louis Armstrong Stadium.

The pressure, induced unending unforced errors from Prajnesh, who was trying too hard. He had the heart to fight but lacked the experience of playing against the best in the business.

Nevertheless, the 29-year-old from Chennai competed in all Grand Slams this season, though he is yet to win a round in singles main draw.

Long rallies featured from the word go, though Prajnesh took some time to find his range. The Indian dropped serve in the first game of the match but broke Medvedev in the fourth with a crushing inside-out forehand winner after serving at love.

The Russian broke back immediately when he placed a cross-court forehand from baseline in the open court.

It was a dogfight out there but Medvedev nosed ahead again with another break of serve and consolidated it with a hold. 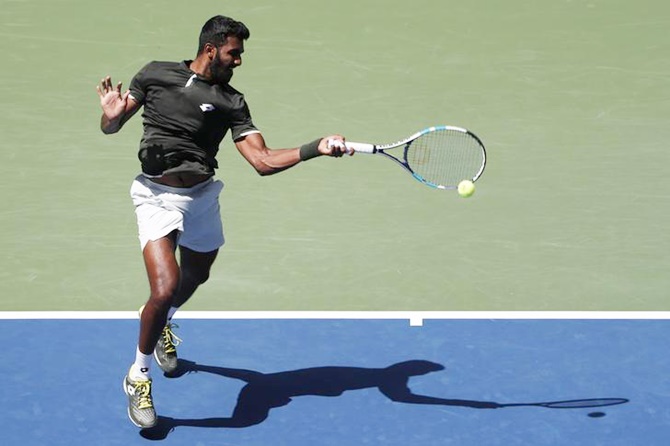 Prajnesh mixed it up nicely by striking hard from the baseline with his free-flowing forehand and played some deft drop shots to set up points.

Prajnesh's body language was aggressive while Medvedev largely remained calm as the Russian served big and his solid returns in long rallies helped him take those extra points.

Unforced errors from Prajnesh when Medvedev served for the opening set made easy the job of the Russian.

Prajnesh began the second set with double faults and a forehand error at 30-all put him down by a breakpoint, which Medvedev converted.

From here it was one-way traffic as unforced errors from Prajnesh continued to pile and soon he was down 0-3 with double break.

He finally got on the board in the fifth game but was now trailing 1-4. The second set was over in no time with more and more errors flowing off the Indian's racquet.

Medvedev took a medical timeout immediately after the second set to treat his left thigh but did not let Prajnesh take any advantage. He played smartly by making the points short with drop shots.

Prajnesh only helped his rival's cause by not curtailing errors.  He had lost steam and was going all out but the balls just flew over the lines. 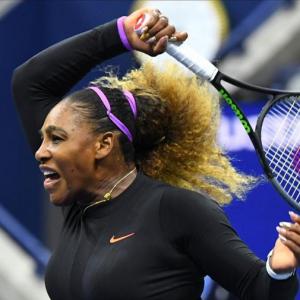 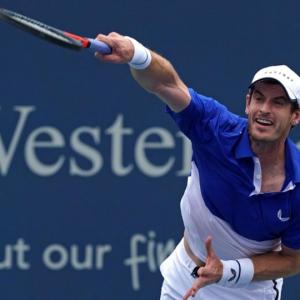