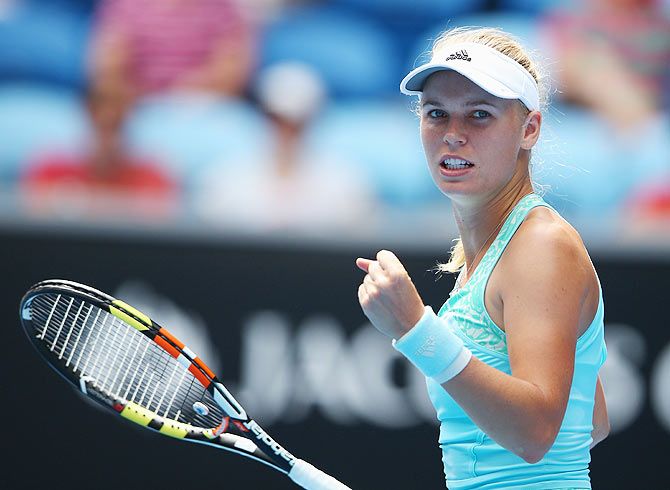 Caroline Wozniacki of Denmark celebrates winning her first round match against Taylor Townsend of the United States at the 2015 Australian Open at Melbourne Park on Tuesday. Photograph: Mark Kolbe/Getty Images

World No 8 and Liverpool fanatic Caroline Wozniacki has lamented the departure of another number eight, describing Steven Gerrard's impending exit from the Merseyside club as "sad" as she ponders trips to Los Angeles to watch him play.

The 34-year-old Liverpool captain announced earlier this month he was moving to Major Soccer League champions Los Angeles Galaxy after playing his entire career at Anfield.

Gerrard was quoted by media as saying he would have stayed at Liverpool had he been offered a new contract in the close season and that coach Brendan Rodgers had informed him he would not play every game.

"I'm obviously sad. I think Stevie has done so much for the team over the years," Wozniacki told reporters on Tuesday after the Dane opened her Australian Open campaign with a 7-6, 6-2 victory over American Taylor Townsend.

"He's a legend. I think if that's what he thinks is the right time, I have to support that." The former world number one, who famously warmed up in a Liverpool shirt signed by Gerrard before a match at the 2011 Qatar Open, said she wanted the player to remain at the Reds.

"But at the same time he had a talk with the manager and said that maybe he wasn't going to be playing as much," she added.

"Yeah, I'm a little sad. I don't know. I'm going to have my Stevie G jerseys hanging somewhere. Unfortunately he won't be playing there anymore. Caroline Wozniacki of Denmark hits a return against Taylor Townsend of the US. Photograph: Issei Kato/Reuters

Wozniacki has a tough second round match against two-time Australian Open champion Victoria Azarenka, who has been on the comeback trail after injury wiped out most of her 2014 season.

The unseeded Belarusian was impressive in her opening 6-3, 6-2 win over American Sloane Stephens.

"Yeah, it's going to be tough," said Wozniacki of the clash against former world number one Azarenka, now ranked 44th.

"I saw her play a little bit. Obviously she's a great player... She's definitely going to climb the ranks."

© Copyright 2021 Reuters Limited. All rights reserved. Republication or redistribution of Reuters content, including by framing or similar means, is expressly prohibited without the prior written consent of Reuters. Reuters shall not be liable for any errors or delays in the content, or for any actions taken in reliance thereon.
Related News: Caroline Wozniacki, Steven Gerrard, Liverpool, Taylor Townsend, Stevie
COMMENT
Print this article