PHOTOS: How the Mayweather v Pacquiao bout was fought round-by-round

American boxer Floyd Mayweather Jr. continued his unbeaten run over Manny Pacquiao of the Philippines with a unanimous decision victory in their welterweight megabout at the MGM Grand Garden Arena in Las Vegas on Saturday.

We present a summary of how the bout panned in each of the 12 rounds: 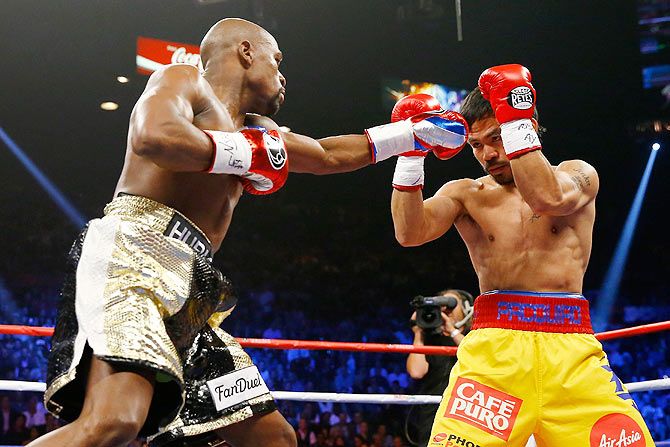 Mayweather and Pacquiao spent the bulk of the opening round sizing each other up on Saturday.

Mayweather landed a pair of hard right hand's on Pacquiao during but the Filipino southpaw still had a smile of his face when the bell rang to end the round. 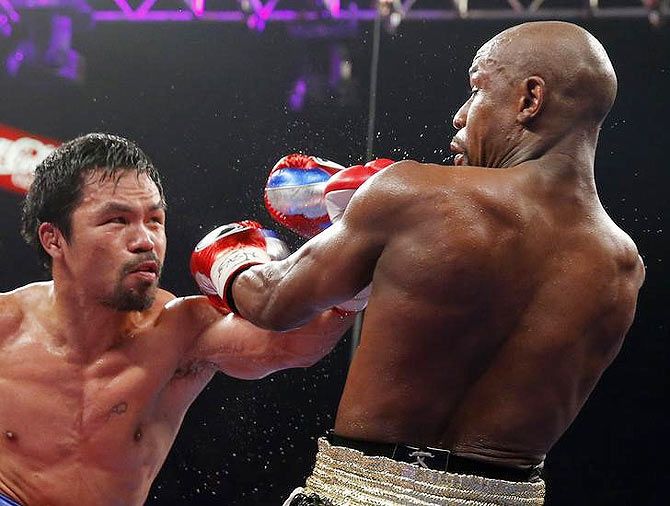 Pacquiao landed a hard shot on Mayweather late in the second round of their megafight on Saturday.

Despite landing the hardest shot of the fight up to that point, it was the Filipino southpaw who was chasing his American opponent around the ring for much of the round. 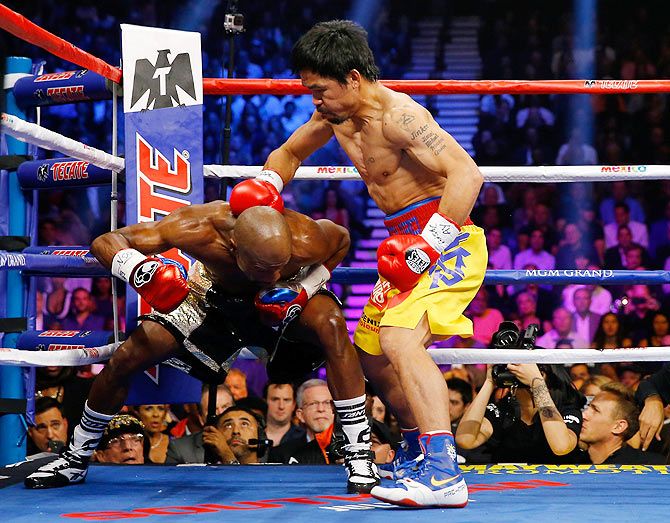 Mayweather landed a right hand below the belt of Pacquiao during the third round of their megafight on Saturday but the Filipino southpaw kept a smile on his face.

A big left hand from Pacquiao late in the third round narrowly missed Mayweather, who was caught along the ropes.

Pacquiao had Mayweather pinned against the ropes during the fourth round on Saturday and unleashed a flurry of punches, including a left hand that seemed to stun the American.

Pacquiao landed several punches on the body but Mayweather appeared to cover up and protect himself for the most part. 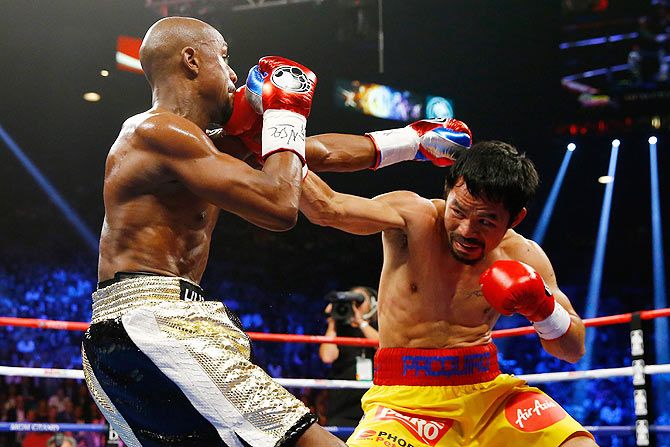 Pacquiao and Mayweather slowed down the pace of their fight during the fifth round with the duo exchanging a series of shots.

Pacquiao threw 16 punches in the round.

Pacquiao did his best to keep up his all-out attacking style on Mayweather but his undefeated opponent was unfazed, at one point shaking his head after the Filipino southpaw unleashed a slew of punches.

Pacquiao, who has appeared to get the better of Mayweather to this point, also landed a straight left hand early in the sixth round. 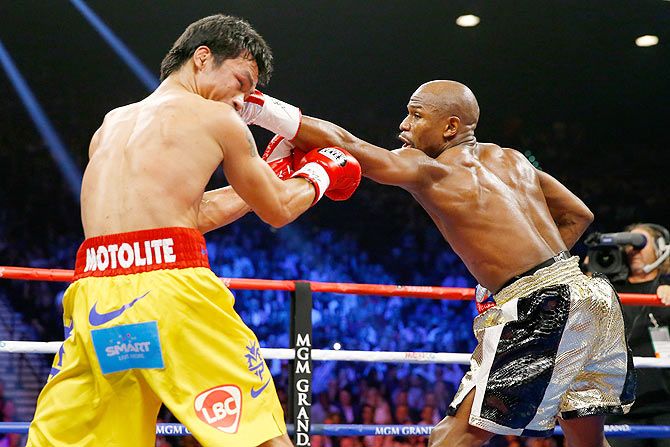 Pacquiao and Mayweather spent most of the seventh round dancing around the ring until the Filipino southpaw landed a left hand during the final 40 seconds.

Mayweather came out strong early in the round but neither fighter managed to land a significant punch.

Pacquiao landed a left and right on Mayweather, who was showcasing his defensive prowess and managed to get in a few punches of his own during the eighth round.

Floyd Mayweather, considered one of the best defensive fighters of all-time, also landed a hard right that stunned Pacquiao for a second followed shortly after by a left hook. 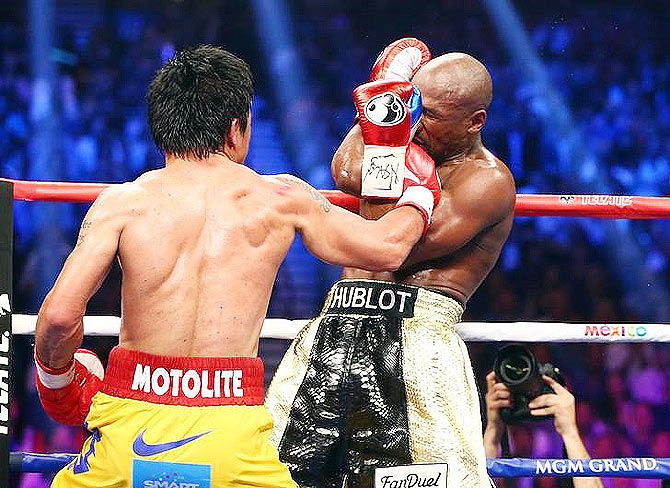 Pacquiao landed a quick left and right on Mayweather to start the ninth round and finished the round with another late flurry.

Mayweather almost slipped early in the round after swinging and missing with a big punch.

Pacquiao landed a hard body shot on Mayweather to start the 10th round of their megafight on Saturday.

Despite Pacquiao's attempt to be the agressor and unleashing the occasional flurry on his opponent, Mayweather's quickness and timing was evident and he was controlling the flow. 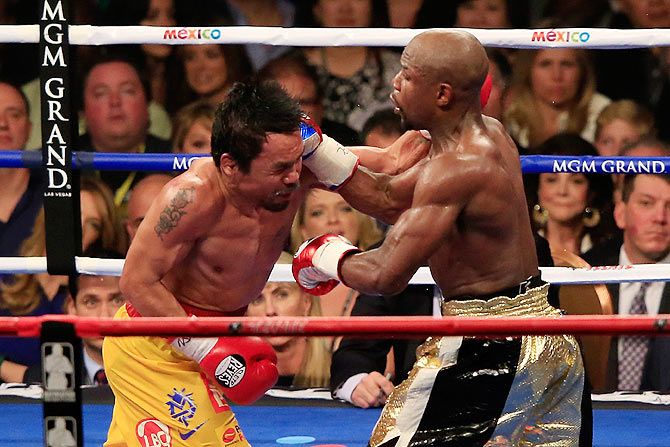 Mayweather came out fast in the 11th round and landed a big shot on Pacquiao as the 12-round fight entered what are known as the "championship rounds."

After coming out strong in the round, Mayweather quickly retreated to his defensive style and at one point got caught in the corner but Pacquiao could not land a significant punch.

Manny Pacquiao was unable to land a knockout punch on Floyd Mayweather during the 12th and final round of their megafight on Saturday.

Mayweather easily kept Pacquiao at bay in the round with the Filipino southpaw apparantly behind on points when the final bell sounded.

© Copyright 2021 Reuters Limited. All rights reserved. Republication or redistribution of Reuters content, including by framing or similar means, is expressly prohibited without the prior written consent of Reuters. Reuters shall not be liable for any errors or delays in the content, or for any actions taken in reliance thereon.
Related News: Manny Pacquiao, Floyd Mayweather, MGM, Las Vegas, PHOTOS
SHARE THIS STORYCOMMENT
Print this article