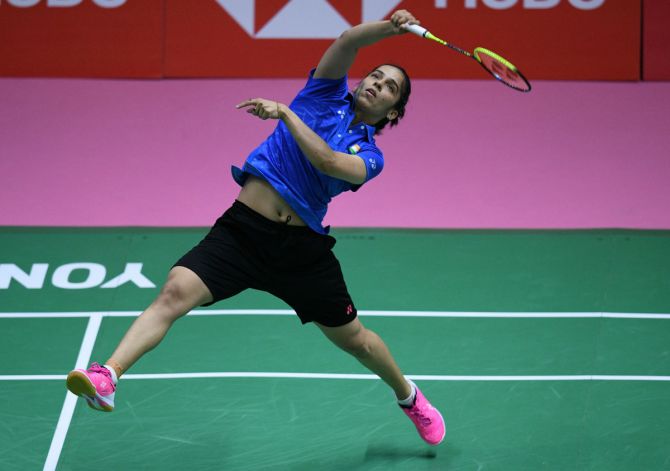 IMAGE: Saina Nehwal went down in straight games to Denmark's Line Christophersen in the semi-finals of the Orleans Masters. Photograph: Robertus Pudyanto/Getty Images

Saina Nehwal bowed out in straight games in the women's singles semi-finals but unheralded duo of Krishna Prasad Garaga and Vishnu Vardhan Goud Panjala kept India in the title hunt by storming into men's doubles final at the Orleans Masters, in Paris, on Saturday.

However, Krishna and Vishnu cheered up the Indian camp with a 21-17, 21-17 win over English pair of Callum Hemming and Steven Stallwood in a 35 minute semifinal clash to reach their maiden final of a Super 100 event.

The Indian duo, playing their first event together this year, will take on either Indonesian pair of Sabar Karyaman Gutama and Moh Reza Pahlevi Isfahani or fourth seeded English combination of Ben Lane and Sean Vendy in the title clash on Sunday.

Krishna and Vishnu had a slender 4-2 early on but the English paur soon jumped to a 11-8 lead at the break. However, the Indian pai soon caught up at 13-13 and marched on to seal the opening game.

In the second game, Krishna and Vishnu slowly moved ahead to a 11-7 advantage at the interval and even though their rivals narrowed down the gap to 15-17, the Indian duo ensured there was no hiccups.

Krishna, 21, is India's No. 1 ranked doubles player and used to pair up with Satwiksairaj Rankireddy in his junior days.

After Satwik and Chirag Shetty were paired together, Krishna started playing with Dhruv Kapila since November, 2016. The duo continued for two and a half years before separating in 2019.

The 20-year-old Vishnu also played with a few other Indian doubles players in his junior days. He and Ishaan Bhatnagar had reached the final at the 2019 Bulgarian Junior international. 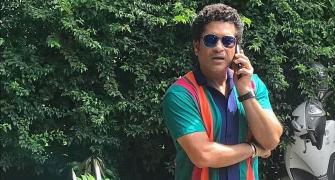 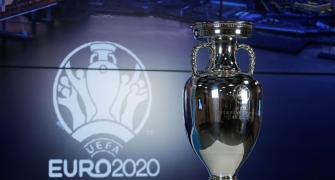 Euro 2020 opener to kick off in Italy with crowds