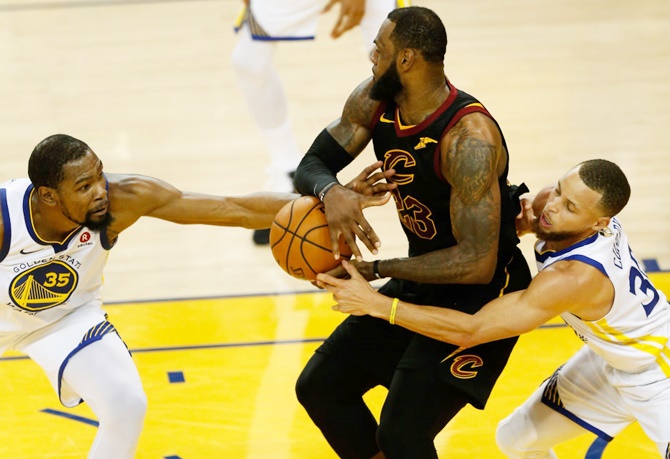 IMAGE: LeBron James, centre, of the Cleveland Cavaliers is defended by Kevin Durant, left, and Stephen Curry of the Golden State Warriors in Game 1 of the NBA Finals. Photograph: Lachlan Cunningham/Getty Images

The Golden State Warriors overcame a 51-point effort from Cleveland Cavaliers' star forward LeBron James before dominating in overtime to seal a thrilling 124-114 Game One triumph in the NBA Finals on Thursday.

In a physical and at times contentious start to the Finals, Stephen Curry led the way for the Warriors with 29 points and nine assists, while Kevin Durant added 24 for the defending champions, who survived a scare from the underdog Cavs.

"We're playing a great team and it's the Finals. It's not going to be easy," Warriors coach Steve Kerr told reporters after the game, which marked the fourth consecutive year the teams have met in the title series.

"I know everybody has been saying and writing that it's going to be easy. They've been to the Finals four years in a row, just like we have, for a reason."

The Cavaliers raced out to an 11-point lead in the first half behind 9-for-11 shooting by James and 12 points from Kevin Love, who returned to the starting lineup after missing the Game Seven East Finals win over the Boston Celtics with a concussion.

The Warriors clawed their way back in the second quarter before Curry tied the game at 56-56 with a buzzer-beating three-point shot to end the half and send the yellow-shirted sold-out crowd into a frenzy.

The Warriors opened a seven-point lead in the third quarter but turnovers, miscues and the continued dominance of James kept the game close throughout the fourth.

The Cavs, who finished the season with a 50-32 record, looked in position to pull off the win when, with just seconds left in regulation, guard George Hill missed a free throw but team mate J.R. Smith snatched the rebound near the basket.

Smith, however, thinking his team had the lead, dribbled away from the hoop and ran the clock out instead of taking a shot, sending the game to overtime with the teams locked at 107-107.

The Warriors (58-24 for the season) dominated the extra period, outscoring the Cavaliers 17-7 behind timely buckets from Shaun Livingston, Klay Thompson and Curry.

The overtime blowout did not prevent the game from ending in a controversial manner, however, with an altercation between Cavs big man Tristan Thompson and Warriors forward Draymond Green.

Green mocked Thompson for fouling out of the contest and Thompson responded by shoving the ball in his tormentor's face and was ejected by the referees.

Curry and Klay Thompson also exchanged words with James toward the end of the game and the bad blood between rival teams is expected to carry over to Game Two of the best-of-seven series in Oakland on Sunday.

A scary moment occurred in the first quarter when Klay Thompson was upended by Smith and came up hobbling before heading to the locker room.

To the relief of the home crowd, the sharpshooting guard returned to start the second quarter after having his left leg taped by trainers.

James was also injured when Green poked him in the eye as he went hard to the rim, causing the Cavaliers forward to roll on the floor in pain. A bloody spot was later visible on his eye but he stayed in the game.

© Copyright 2020 Reuters Limited. All rights reserved. Republication or redistribution of Reuters content, including by framing or similar means, is expressly prohibited without the prior written consent of Reuters. Reuters shall not be liable for any errors or delays in the content, or for any actions taken in reliance thereon.
Related News: Golden State Warriors, NBA Finals, LeBron James, Klay Thompson, Cleveland Cavaliers
SHARE THIS STORYCOMMENT
Print this article 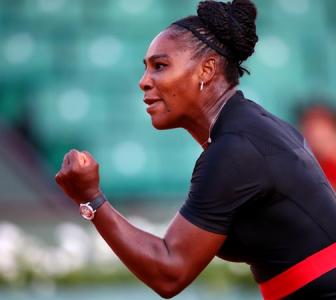 Serena out to prove she is the best 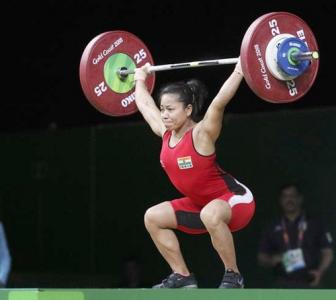 I am innocent, will challenge suspension: Chanu 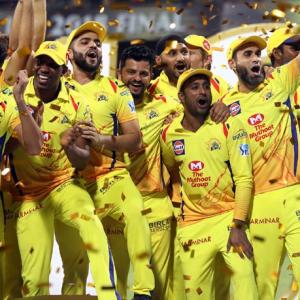