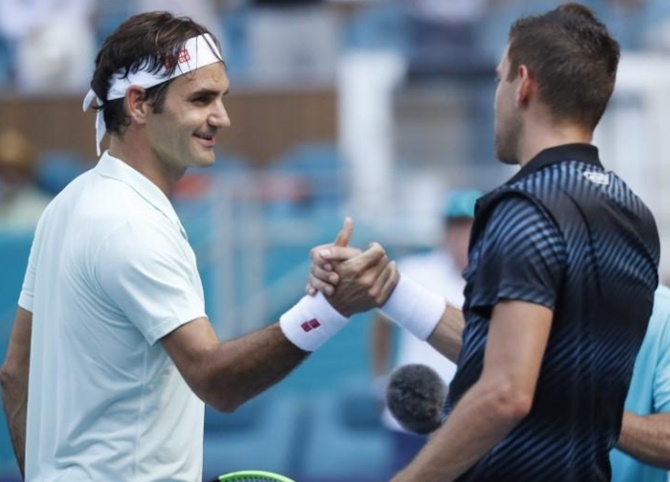 IMAGE: Roger Federer of Switzerland, left, shakes hands with Filip Krajinovic of Serbia after their match in the third round of the Miami Open. Photograph: Geoff Burke-USA TODAY Sports/Reuters

Roger Federer overcame a sluggish start to defeat Filip Krajinovic 7-5, 6-3 and Kevin Anderson’s booming serve proved too much for Joao Sousa as the big names advanced to the fourth round of the Miami Open on Monday.

Serb Krajinovic broke Federer to jump to an early 2-1 lead and it looked like an upset could be in the works against the 20-times Grand Slam champion.

But fourth seed Federer broke back the next game and seized the momentum when he blasted a cross-court forehand winner to break Krajinovic again and take the closely fought first set.

The 37-year-old Swiss coasted after that, thanks to an overpowering serve that Krajinovic struggled to read.

Federer said he was able to shrug off his loss to Dominic Thiem in the BNP Paribas Open final at Indian Wells last week because of his years of experience.

“Nowadays I am able to flush it out quickly. I was the worst at it when I was a teenager... right after it was all over I would cry and be so sad and disappointed,” he said.

“I wasn’t an angry person really, it just broke my heart.

Next up for Federer is a clash with Russian Daniil Medvedev after the 13th seed defeated American qualifier Reilly Opelka in a 7-6(5), 6-7(5), 7-6(0) slugfest that included 41 total aces.

Anderson mixed 13 aces of his own with just one double-fault to seal a 6-4, 7-6(6) victory over Portuguese Sousa earlier on Monday.

The towering South African sixth seed will be a heavy favourite on Tuesday when he faces unseeded Australian Jordan Thompson, who beat Grigor Dimitrov 7-5, 7-5.

Bianca Andreescu’s dominant recent impressive run ended at the Miami Open as the Canadian teenager who has taken the tennis world by storm retired with a shoulder injury while trailing 6-1, 2-0 in her fourth-round clash with Estonia’s Anett Kontaveit.

The 18-year-old arrived in Miami fresh off her triumph at Indian Wells, where she became the first wildcard to win the prestigious event, but an overworked right shoulder ended any hopes of extending her 10-match winning streak.

Andreescu, who had struggled throughout the match, half-heartedly played a Kontaveit serve and then started walking off the court only to casually swat aside a return before signalling to the chair umpire that she was done.

After losing the first set, the Canadian, who has dealt with several injury setbacks in her young career, called for the trainer to work on her shoulder, something she did three times during her third-round clash with Angelique Kerber.

Kerber, who also lost to Andreescu in the Indian Wells final, called the teenager “the biggest drama queen ever” during their post-match handshake in Miami before going on Twitter and crediting the Canadian for a great performance.

Monday’s loss dropped Andreescu, who is ranked 24th in the world after starting the year at 152nd, to 31-4 for the season. Her 35 matches is the highest total on the WTA Tour this season.

Up next for Kontaveit in the quarter-finals will be either Denmark’s former world number one Caroline Wozniacki or Taiwan’s Hsieh Su-wei.

© Copyright 2020 Reuters Limited. All rights reserved. Republication or redistribution of Reuters content, including by framing or similar means, is expressly prohibited without the prior written consent of Reuters. Reuters shall not be liable for any errors or delays in the content, or for any actions taken in reliance thereon.
Related News: Roger Federer, Bianca Andreescu, Filip Krajinovic, Angelique Kerber, Kevin Anderson
SHARE THIS STORYCOMMENT
Print this article 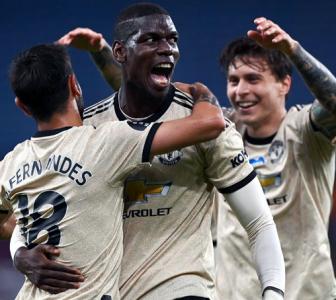 Will there be Sacred Games 3? Find out! 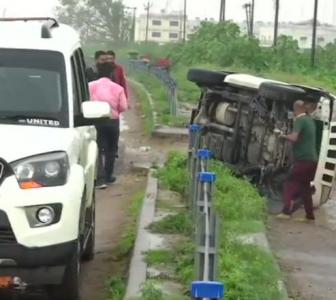 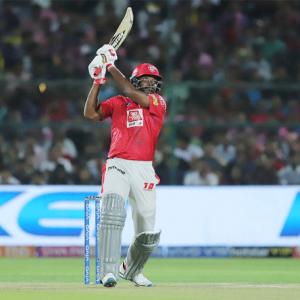