History-making performances, quite a bit of selection drama on the sidelines and some ignominy due to big-ticket dope fails -- Indian boxing was all this and much more in an action-packed year dominated by pint-sized dynamo Amit Panghal.

To count the positives, the 23-year-old Panghal fetched India its first ever silver at the men's world championships, the redoubtable MC Mary Kom was mostly in top form and medals poured in internationally courtesy a deep talent pool.

In the professional circuit, Vijender Singh remained unbeaten, still looking for an opponent who can stand up to the raw power of his punches.

On the downside, a flip-flop selection policy led to six-time world champion Mary Kom being dragged into an unsavoury controversy, and the accomplished duo of Neeraj Phogat (women's camp) and Sumit Sangwan (men's camp) flunked dope tests, sending down shockwaves within the fraternity. For most part, Indian boxing had lots to celebrate and it started with the season-opening Strandja Memorial, one of Europe's oldest and most competitive tournaments.

Panghal's 2019 gold rush began in the tournament, which was also his last competition in the 49kg category.

Former junior world champion Nikhat Zareen and Meena Kumari Devi became the first set of Indian women boxers to finish on top at the same event. Zareen later went on to hit the headlines by vociferously raising the demand for a trial against Mary Kom.

Panghal moved up to 52kg in March and though he sounded a bit nervous about the shift, the results told a different story. He grabbed a gold immediately, at the Asian Championships in April, to assert his supremacy in the new division.

Pooja Rani, a boxer who felt shy about wearing gloves at the start of her career, ensured that women too went home with a gold with her best ever performance at the event. Mary Kom gave it a miss to prepare herself for the world championships.

Then came the world championships in September and October, the blue-riband event which lost some of its sheen after being stripped of Olympic Qualifier status by the International Olympic Committee due to the alleged administrative mess and financial mismanagement in the International Boxing Association (AIBA). IMAGE: Manju Rani claimed individual glory at the women's World Championship, entering the final and signing off with a silver medal. Photograph: BFI/Twitter

There was some drama when the Indian women's squad was finalised for it as Zareen protested after being stopped from appearing for a scheduled trial bout. However, it didn't make much of a difference to the final list as Mary Kom was picked based on her golds at the India Open and an Indonesian tourney besides the consistent performance in the national camp.

What also tilted the scales in the veteran's favour was her victory over Zareen in the India Open semi-finals. Nonetheless, the BFI managed to create a controversy where none should have existed, by denying Zareen a scheduled trial bout and leaving its decision for quite late in the day.

In the world championship for men, Panghal gave India a watershed moment by making the finals after Manish Kaushik (63kg) fetched the bronze, which had earlier been also achieved, in 2009, 2011, 2013 and 2015.

The silver made Panghal the undisputed top name in Indian men's boxing and he capped the year by winning the Best Boxer Award at the BFI's first ever pro-style league.

As for the women, 20-year-old Manju Rani, who lost her father – a BSF man -- to cancer in 2010, found the individual glory she was looking for when she took to the sport. She was the lone Indian to make the women's world championship final this time and signed off with a silver medal. The iconic Mary Kom had to be content with a bronze this time. IMAGE: Boxer Mary Kom after her bout against Nikhat Zareen for the Olympic qualifiers on December 28. Photograph: Arun Sharma/PTI

The BFI had decided that the gold and silver-winners from the women's world championship would be given direct selection for next year's Olympic qualifiers.

However, the body's President, Ajay Singh, stirred up a hornet's nest by stating that the BFI would make an exception for Mary Kom (51kg) and select her without a trial.

Zareen raised the protest card and even wrote to the sports minister, demanding a trial. The BFI, after maintaining a stoic silence, announced trials and the controversy finally ended after an angry Mary Kom defeated the younger boxer to not just make the cut but also prove a point about her abilities at 36.

The sport itself remained in the doldrums internationally with the International Boxing Association taking charge of the Olympic qualification process and the conduct of the competition in the Olympics.

This was after AIBA failed to convince IOC of its financial well-being and integrity, which took a severe hit during the 2016 Rio Olympics due to poor judging.

The coming year promises to be a big one for Indian boxing in which both the seasoned stars and the up and coming ones would look to offset the disappointment of 2016 Games, where India failed to win any boxing medal for men and didn't have a qualified pugilist in the women's draw. 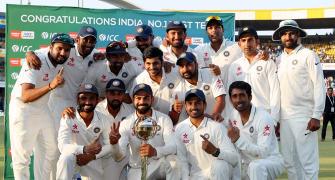 Felt hurt: Zareen on Mary Kom's refusal to hug her