The 22-year-old Hyderabadi had clinched the bronze in the women's singles after her opponent Xin Wang conceded the third-place play-off match at the Wembley Arena in London.

Saina swapped places with Chinese Shixian Wang, who missed out of a London berth after Olympic champion Li Xuerui made a phenomenal run to edge past her to the world number three position in May. Only three players from a country qualify for the Olympics. 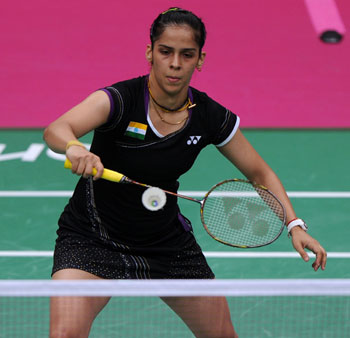 Saina was ranked fifth in the world since March but her highest ranking remains the second position that she had achieved after winning a hat-trict of tournaments  India Open Grand Prix, Singapore Super Series and Indonesia Super Series -- in 2010.

The Haryana-born shuttler had slipped to the number three position in the subsequent months. She last held the world number two position after wining the Hong Kong Super Series in 2010.

P Kashyap, who became the first Indian male shuttler to reach the quarterfinals of Olympics in London, improved two places to reach a career-best ranking of 19th spot.

Commonwealth Games gold medallist pair of Jwala Gutta and Ashwini Ponnappa, who were unlucky to miss out of a quarter-final berth at the London Games, jumped three places to reach the 17th spot.

Jwala and V Diju, who failed to win a single match at London Games, retained their 13th spot in the mixed doubles category.