Experienced goalkeeper Bharat Chetri will lead an 18-member Indian team in the men's Four-Nation Olympic Test Event, in London, from May 2 to 6.

Star midfielder Sardar Singh will be Chetri's deputy in the squad, which was announced on Tuesday by Hockey India after selection trials at SAI Centre, Bangalore, on April 8 and 9.

There are a few changes in the squad. Gurbaj Singh makes a comeback and Chinglensana Singh earned a place.

However, promising India forward Yuvraj Walmiki, who was injured during the Olympic qualifier, was left out.

The other notable change was that of defender Rupinderpal Singh, who was put in the standby list after featuring in the main team during the qualifier in February.

The selection trial was witnessed by Hockey India selectors B P Govinda and Col Balbir Singh, along with government observer Harbinder Singh.

The tournament, which also features Australia, Germany and Great Britain, will not only give India an opportunity to play against higher-ranked teams that have also qualified for the Olympic Games, but also gain a first hand experience of playing at the venue that hosts the Olympics tournament.

The matches will be played on a blue artificial turf with yellow balls. The pitch has pink runaways. 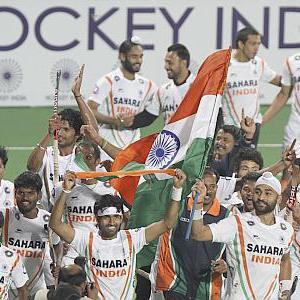