Hackett's former coach Denis Cotterell told local media earlier this month that he blamed the use of Stilnox, a brand of the medication zolpidem, for the swimmer's "lack of clarity" in the final at Beijing.

Hackett was highly fancied to become the first swimmer to win three straight golds in the same Olympic event, but ended up with silver.

Cotterell trained Hackett to consecutive gold medals at the 2000 Sydney Olympics and Athens four years later before they parted ways in 2007.

"In 12 years of racing international 1500m freestyles across Olympic, world championships and Commonwealth Games, I managed to lose twice, and that's one of those races," Hackett told local radio station Triple M. 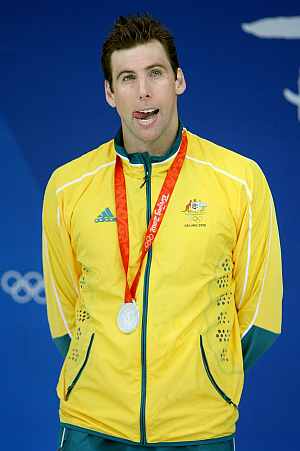 Cotterell's comments were published days after Hackett told News that he had become reliant on Stilnox after being prescribed the drug during his career and described it as "evil."

Hackett's admission prompted the Australian Olympic Committee (AOC) to ban all of its athletes at the London Games from taking strong sedatives, a move slammed by current and former Olympians.

Russell Mark, who won gold in the double-trap at the 1996 Atlanta Games and will compete in his sixth Olympics at London, said the ban would hurt athletes' performances and cost Australia medals.

AOC chief John Coates said athletes should use relaxation techniques and at a last resort, temazepam, which has fewer side-effects, if they were struggling to sleep.

He added that the ban would be policed with breaches punished by anything up to expulsion from the team.

Hackett's reputation has taken a battering in recent months after a messy separation from his wife and an admission that he trashed their apartment in a drunken rage, causing a charity to sever ties with him.

He denied that he had become dependent on Stilnox away from the pool.

"I certainly didn't have an addiction," he said.

"I was just reliant on them through competition, because of the anxiety of four years' build-up. You're swimming 16 km a day, six days a week; you're training or competing 49 weeks of the year.

"But did it affect that particular race day? The only person I have to blame for not getting that gold is myself. Silver is not the worst thing in the world."

© Copyright 2022 Reuters Limited. All rights reserved. Republication or redistribution of Reuters content, including by framing or similar means, is expressly prohibited without the prior written consent of Reuters. Reuters shall not be liable for any errors or delays in the content, or for any actions taken in reliance thereon.
Related News: Grant Hackett, Stilnox, AOC, Denis Cotterell, Australia
COMMENT
Print this article