'He can say what he wants, I don’t have a problem with it. Does he show me the same amount of respect that most other players do? No, he doesn’t, but that’s the way he communicates these days'

IMAGE: While speaking to tennis writer Ben Rothenberg on the ‘No Challenges Remaining’ podcast last month, Kyrgios described Djokovic as someone who has a "sick obsession" with being as popular as Swiss rival Roger Federer. Photograph: Al Bello/Getty Images

Novak Djokovic does not have a problem with his outspoken peer on the men's ATP Tour Nick Kyrgios or the Australian's stinging remarks regarding the Serb's personality, the world number one said on Wednesday.

While speaking to tennis writer Ben Rothenberg on the ‘No Challenges Remaining’ podcast last month, Kyrgios described Djokovic as someone who has a "sick obsession" with being as popular as Swiss rival Roger Federer.

The 24-year-old Kyrgios made the comments during the Italian Open in Rome where he was expelled from the tournament during his second-round match with Norwegian Casper Ruud after hurling a chair on to the court.

During the podcast, Kyrgios also ripped into Rafael Nadal and the Spaniard's uncle Toni and, after being defaulted from the tournament in Rome, he pulled out of the French Open having used expletive language to describe the event at Roland Garros.

Despite that tantrum, Djokovic, who is preparing in the sweltering heat of a hardcourt complex in central Belgrade for this year's July 1-14 Wimbledon championships, expressed sympathy for the Australian.

"Honestly, I think that deep down he is not such a bad guy," Djokovic said of Kyrgios after a two-hour practice session at a tennis academy managed by his close friend Janko Tipsarevic, a member of Serbia's 2010 Davis Cup-winning team.

"I don’t know why Kyrgios says all these things. Whether he is seeking attention or has some other motive, he obviously wants to be sincere and transparent. It’s the way he is, I respect that like I respect all other players on tour.

"He can say what he wants, I don’t have a problem with it. Does he show me the same amount of respect that most other players do? No, he doesn’t, but that’s the way he communicates these days."

IMAGE: Novak Djokovic of Serbia meets with fans during a training session in Belgrade, Serbia on Wednesday. Photograph: Djordje Kojadinovic/Reuters

World number one Djokovic revealed that the two were actually close to establishing a healthy relationship before the Australian turned on the 32-year-old from Belgrade.

"Before he unleashed this wave of criticisms against me, I actually met him off court during a US Open tournament, five years ago I think, and talked to him a bit," said Djokovic.

"It was at a time when everyone was on his case because of his antics.

"I offered help in the sense that I told him he could always come and talk to me if he needed to, because I faced similar situations and the same kind of criticism for my behaviour when I was younger.

"But something changed inside him from that point on. I'd never had that kind of problem with anyone else on tour but I am not losing any sleep over it. I don’t understand why or what happened but I don’t judge him."

Djokovic missed a chance to win four Grand Slam tournaments in a row when he was beaten by Dominic Thiem in five sets in the 2019 French Open semi-finals but said he now needed less time to recover emotionally from such near misses than before.

He also singled out Federer and Nadal, along with himself, as the prime candidates to win Wimbledon but conceded there was a bunch of players capable of upsetting the big three.

"I needed only one night to bounce back. Earlier in my career, it took much longer. The emotions and the sadness when I lose are still there of course, but I move on much quicker now among other things because I am a father of two children.

"As for Wimbledon, Federer and Nadal are always among the top candidates of course and the three of us should be the favourites to win the title.

"However, apart from the usual suspects, there are a bunch of other very strong contenders. I see Milos Raonic, Alexander Zverev, Stan Wawrinka, John Isner, Dominic Thiem, Stefanos Tsitsipas and Kevin Anderson as the next in line." 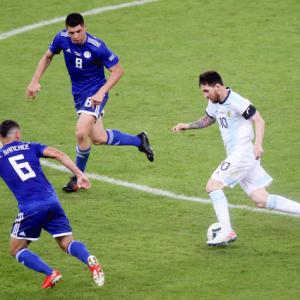