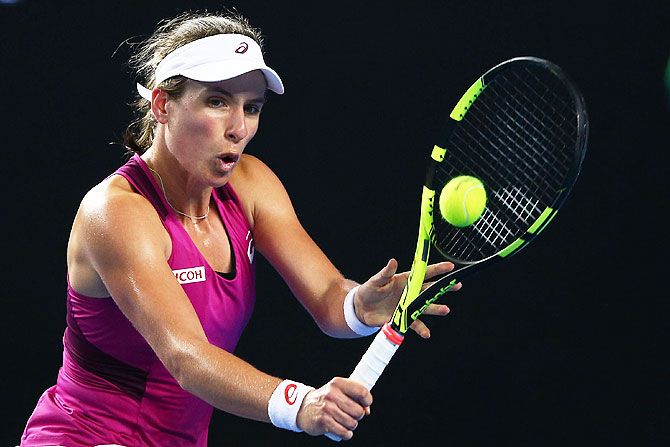 Britain's Johanna Konta will become the first British woman to reach the top 10 of the WTA rankings for 32 years on Monday after reaching the China Open final on Saturday.

Irrespective of the result Konta is guaranteed a top-10 spot when the new rankings are released -- the first British woman to rise so high since Jo Durie in 1984.

"I know I've achieved something good whenever I'm mentioned in the same sentence as her," Konta told reporters.

The 25-year-old's rise has been meteoric.

Seventeen months ago she was ranked 146th in the world and not on anyone's radar as a potential top-10 player.

She moved to train with coach Esteban Carril in northern Spain and her form surged.

A run to the fourth round of the US Open meant she ended last year inside the top 50 and her progress has continued apace, reaching the Australian Open semi-finals and earning her first WTA title at Stanford.

Consistency has been the key and her win over Keys was her seventh over a top-10 player this year.

Her progress has impressed compatriot Andy Murray, who is in the men's singles final.

"She's obviously made huge improvements from the beginning of last year," he said. "Because everything is still new to her, she's going to be learning at quite a fast pace, too.

"It's exciting to see how far she's going to be able to go."

Konta is on course to qualify for the WTA Finals in Singapore so Sunday's showdown with Radwanska would be the perfect test of her credentials.

Radwanska, the 2011 China champion, secured a 7-6(3), 6-3 victory over Elina Svitolina, who upset world number one Angelique Kerber earlier in the tournament.

The Pole, poised to qualify for the season-ender for a sixth year in a row, was 3-5 down in the opener before recovering.

"I was just very glad I could come back in that first set. I think it was very important. I just played a great tiebreaker, so that helped me a lot for sure in that match," she said.

© Copyright 2021 Reuters Limited. All rights reserved. Republication or redistribution of Reuters content, including by framing or similar means, is expressly prohibited without the prior written consent of Reuters. Reuters shall not be liable for any errors or delays in the content, or for any actions taken in reliance thereon.
Related News: Johanna Konta, WTA Finals, Agnieszka Radwanska, China Open, Andy Murray
SHARE THIS STORYCOMMENT
Print this article