Cares of the World Cup weigh Wilkinson down

These were not adjectives that were meant to be used for England flyhalf Jonny Wilkinson.

But as the rugby World Cup enters its final stages, they are being freely used to describe a man hailed by some English writers as the world's best player.

What has gone wrong?

On the surface, not a whole lot. Wilkinson has been hesitant, sometimes laboured. So have England. 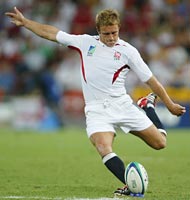 But Wilkinson has also kicked most of his goals. And England, who meet France in Sunday's second semi-final, have won all their matches.

But more, much more, was expected from Wilkinson in Australia. So far, he has failed to deliver on the big stage.

Against South Africa, Wilkinson was competent in his general play and immaculate in his goal-kicking.

The murmurs began when England trailed Samoa for an hour before rallying to win a game they were expected to dominate. Wilkinson failed to take charge and his goal-kicking was suddenly fallible.

In the quarter-final against Wales, Wilkinson kicked a series of second-half penalties, which enabled England to turn around a 10-3 half-time deficit.

This time though, the uncertainties in his general play were palpable. He missed line kicks, fumbled his passes, and until Mike Catt came on as replacement centre, England lacked a midfield general.

On current form, Wilkinson is probably the weakest of the four flyhalves on display in the semi-finals this weekend, a judgement unthinkable before the tournament began.

It is no secret that Wilkinson wants to be the best flyhalf in the world. He has said as much in his weekly column in an English newspaper during the current World Cup.

His work ethic, and in particular his devotion to perfecting the art of goal-kicking, is also a matter of public record.

But could he handle the pressure of a World Cup? The doubters are now in the majority.

On Wednesday, Wilkinson was one of four players presented at a news conference at the team hotel in Manley. Unsurprisingly, he fielded more questions than anybody apart from captain Martin Johnson.

"There's always pressure and you try to deal with that in your own way," Wilkinson said quietly, picking his words with care.

"I wouldn't say I have a corner to turn nor would I say I'm playing well."

Asked if he put extra pressure on himself with his drive to improve, Wilkinson replied: "I have had that put to me a few times.

"I like to try my best. I think it's my duty to make the most of the time I have got.

"There is pressure, I do put pressure on myself. But it is pressure I would put on myself if I was in another profession."

Wilkinson said he had been studying the videos of his performances.

"I have not necessarily enjoyed the way we have performed. I just go out there and do what we have to do."

While the cares of the world have seemingly landed on Wilkinson's shoulders, Frederic Michalak, his French counterpart, has clearly been enjoying himself on the field.

He did pronounce himself perplexed, though, on Tuesday at the number of questions he was asked about Wilkinson.

Wilkinson has at least one ally. Asked about his perceived lack of form, France's coach Bernard Laporte said he would happily select him.

"If England don't want Wilkinson anymore, they can give him to us on loan for the next four days. We play a simple game and he will adapt very quickly," he said.