Despite bagging the gold medal at the Commonwealth Games in Delhi last year, Kenyan John Kelai lamented the absence of spectators along the route in the capital because of security reasons.

"The difference between Mumbai (where he has won twice) and Delhi is while the Commonwealth Games race (in October, 2010) was quiet and serene because of the tight security, in Mumbai the spectator participation uplifts the runners," said the 34-year-old Kenyan athlete in Mumbai on Thursday.

Kelai, who won the Standard Chartered Mumbai Marathon in 2007 and 2008, is among the favourites to win the eight edition of the richest prize- money marathon in Asia on January 16, but can expect tough competition from the strongest-ever men's field for the event.

Kelai said the mass participation in Mumbai boosts the morale of the elite runners and the cheering of the crowd along the route gives them fresh impetus, especially on the return stretch where the racers have to negotiate the Kemp's Corner flyover.

"The last part of the race in Mumbai has ups and downs, and the cheering from the spectators gives us a big morale boost. That is the difference between Mumbai and Delhi," said Kelai, who clocked 2 hours, 12 minutes and 3 seconds when he won the Mumbai event in 2007 and 2:12:27s while retaining his title in 2008.

Kelai said victory in the Commonwealth Games has helped him move higher in the IAAF standards.

"Winning the CWG gold propelled my name to higher heights in the IAAF standards. My name has moved up higher than many great names who have not won a gold, as the IAAF values the gold medal more," he said, adding that his aim for this year is to try and qualify for the World Championships.

He said he is well-prepared for Sunday's race and it is now just a question of putting into practice what he had done during training.

"My preparation has gone well. The more challenging part is the training so that you are prepared on race day. During the race you need to apply what you have prepared," said the title-favourite, who is used to racing in Indian conditions.

Kelai can expect tough challenge from the likes of compatriots Evans Rutto and Justus Kipshirchir who have with personal bests of 2:08.36s and 2:10.6s respectively, Ethiopia's Tesfaye Tola, with a career high of 2:06.57s, Qatar's Kenyan-born Mubarak Shami (formerly Richard Yatich), who won the 2007 Paris Marathon, and Russia's Oleg Kulkov.

According to Elite Athletes co-ordinator Ian Ladbrooke, this year's Mumbai men's field is the toughest in its history.

"There are 15 athletes who have attained the gold label qualification of 2:10:30s. This is the strongest-ever men's field in Mumbai. It's cooler now than last year. If the weather gods are kind on race day then we can expect a new course record," he said.

Women's defending champion Ethiopia's Bizunesh Urgesa and her compatriot Haile Kekebush, winner in 2009 and runner-up last year, are expected to arrive in the city on Thursday night. 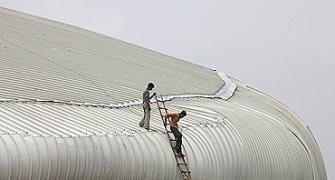 'Lack of response' from AFI for Mumbai Marathon