Inconsistency coupled with some sloppy finishes cost the Indian archers dear as they lost all their matches in the final to settle for three silver medals in the Archery World Cup Stage 3 in Ogden, USA.

The Indians figured in three finals and one bronze medal play-off in the recurve section events held on Friday, but in none of them could register a win on the penultimate day, according to information received here.

The country's gold medal hope now rests on women's trio of Jhano Hansdah, Gagandeep Kaur and Manjudha Soy, who have made it to a World Cup final in the compound section for the first time.

They will take on the hosts trio of Erika Anschutz, Christie Colin and Jamie van Natta in the summit clash, scheduled later tonight.

In what could have been a hattrick of gold medals for promising teen archer Deepika Kumari turned out to be a flop show as she lost both her individual as well as team finals with some inconsistent performances.

In the mixed pair final, Deepika's partner Talukdar let her down by running out of time in his last arrow, to pick a zero that virtually crowned their American opponents.

The women's recurve team of Deepika, Laishram Bombayla Devi and Chekrovolu Swuro began the Indian campaign on a sorry note when they lost to their opponents from Ukraine 213-210 to settle for a silver.

Ukraine became India's nemesis yet again when the fancied men's recurve trio of Jayanta Talukdar, Thupuvoyi Swuro and Viswash lost by an identical margin in the bronze play-off.

The 17-year-old Ranchi girl was overwhelmed by top seed Ming Cheng of China with some neat performance to settle for a silver in the women's recurve.

In the mixed recurve final, Deepika and Talukdar began the first end with a three point (36-33) lead over Miranda Leek and Brady Ellison of the US. But the American duo made a flying comeback in the second end with four perfect 10s to total 73 (40+33).

On the other hand, it was a disaster of sorts for the Indians when Talukdar could not shoot his last arrow on time to slump to 26 for a total of 62.

It virtually gifted the US pair the gold as the hosts had a commanding 73-62 lead at the midway stage.

Both the finalists shot 37 each in the final end, which was enough for Miranda and Ellison to clinch the yellow metal defeating the duo of Deepika-Talukdar 145-136.

In the women's recurve final, Deepika and Ming locked 27-27 in the first set and the second was a similar script with both tying 25-25.

But Ming changed the course of the match from the third set to open up a 4-2 lead. The Chinese maintained her composure in the final set as Deepika could not match up to Ming to go down 2-6.

In the women's recurve team final, Ukraine avenged their loss to the Indians in the last stage of the World Cup in Antalya to pocket the gold medal.

India up a four point lead in the first end, but Ukraine bounced back with two perfect 10s to tie 105-105 after the second end.

In the third end, Indians had a slender one-point lead but the Ukrainians had an excellent start to their last end with two 10s and one 9.

The Indian trio were less accurate with two 8s and a 9 to go down in the women's recurve final. 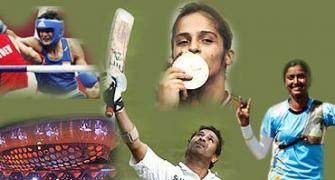 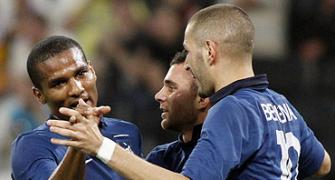