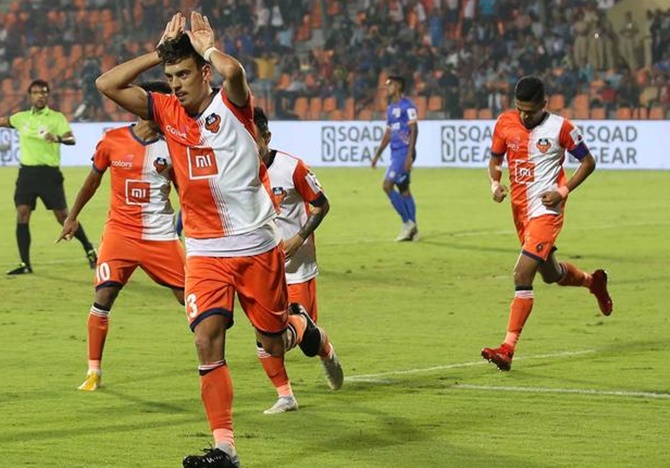 Spanish midfielder Edu Bedia (28th minute) and star striker Ferran Corominas (79th minute) struck on either side of the break at the Mumbai Football Arena as a sizable number of fans cheered the visiting team.

Right from the beginning, the two teams played aggressive. The visitors had an early chance in the second minute.

A throw-in from Seriton Fernandes from the right reached Corominas, who gave a low pass to Brandon Fernandes.

But the midfielder sold a dummy to skipper Mandar Rao Dessai behind him. Dessai shot from a distance but an alert Mumbai custodian Amrinder Singh parried it away.

Goa had more chances but Mumbai defenders thwarted the attack either from near the box or inside the box.

After wasting a couple of free-kicks, Goa's aggression finally paid off in the 28th minute with Bedia netting in the opener.

Brandon Fernandes ran from the midfield and then put Corominas on the goal. Corominas' shot was saved by Amrider but the deflection fell in path of Bedia, who shot on target and the ball took deflection of Mumbai defender Subhasish Bose, before rolling in. At the half-way mark, Goa were 1-0 ahead.

After the change of ends, Mumbai were initially more aggressive. But, it was Goa's goalkeeper Mohammad Nawaz, who ensured that his side stayed ahead as he made couple of superb saves.

Two back to back chances came for Mumbai, but they failed to equalize. In the 63rd minute, Paulo Machado's free-kick was nodded by Lucian Goian, but it hit the crossbar.

Mumbai defender Bose brought down Corominas inside the box as the referee pointed to the dreaded spot. A calm and composed Corominas successfully converted the penalty as he slotted the ball into the right corner to double the lead.

With the win, Goa logged three points to move to the third spot in the standings with 24 points. This was Goa's seventh win in 13 games, while it was Mumbai's only third defeat in 14 games. In their previous encounter in Goa, the home team had hammered Mumbai 5-0. 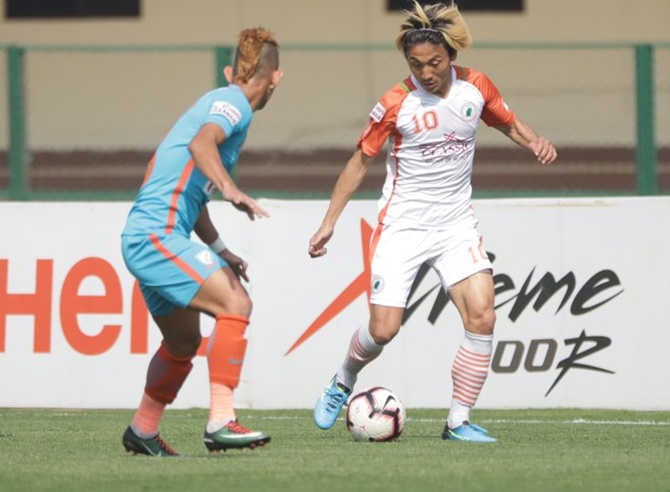 Katsumi Yusa struck a brace as Neroca FC rallied to beat Indian Arrows 3-2 in an exciting I-League match in Bhubaneswar.

Yusa struck in the 68th and 87th (penalty) minutes while Felix Chidi (38th) was the other goal scorer for Neroca.

Boris Thangjam (34th) and Rohit Danu (62th) found the target for the home side in the match played at the Kalinga Stadium.

The match began on a slow pace with Neroca playing a much-organised game and enjoying better possession. The Manipur-based side had some fine attempts, but a goal eluded them due to lack of good finishing.

The Arrows, who were trying hard to come back into the game, kept on penetrating with attacks on the counter but could not really succeed in doing that.

Their efforts, however, were soon rewarded when Boris made the most of an opportunity and converted a cross from the right side to fire in a goal for Indian Arrows in the 34th minute. This was also the 200th goal of the I-League this season.

Neroca soon found the equaliser four minutes later through Chidi. The game thereafter opened up a bit and both sides were attacking in short bursts but neither of them could convert any of the chances that came their way. The first half ended 1-1.

In the second half, a defensive error cost Neroca dear as they conceded a goal in the 62nd minute.

Rohit Danu made the most of the situation as he dispossessed the Neroca center-back and showed his alertness as he comfortably found the back of the net to regain the lead for Indian Arrows.

However, the Imphal side, who finished runners-up last season, yet again found an equaliser through a brilliant header from Yusa in the 68th minute. The Japanese was given time and space in the Arrows penalty area and he headed past the opposition goalkeeper off a cross from the right flank.

The game thereafter saw Neroca creating many chances but they were unable to find the lead until the 87th minute when a handball inside the Arrows box saw the visitors being awarded a penalty kick.

Yusa made no mistake in finding the back of the net to seal the match for his side. 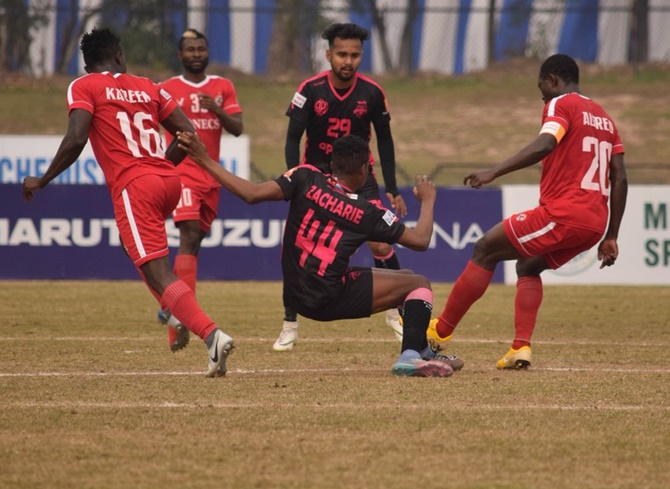 IMAGE: The all-important goal was scored by Lalrinchhana in the 69th minute. Photograph: I-League/Twitter

Former champions Aizawl FC beat defending champions Minerva Punjab FC 1-0 in a 15th round match of the I-League in Panchkula.

The all-important goal was scored by Lalrinchhana in the 69th minute.

With this win, the Stanley Rosario-coached Aizawl leapfrogged their Friday hosts and moved to seventh on the points table, with 14 points from 15 games.

They were in 10th spot before this game, deep into the relegation zone, but this result takes them out of it for now.

For Minerva, the season got from bad to worse, as they suffered their seventh defeat in 15 games. With an AFC Champions League play-off campaign coming up, it will not inspire their side, despite a heroic effort from their young keeper Arshdeep Singh.

It was a scrappy affair for most part of the game, except for a period in the second half when Aizawl looked enterprising.

The Mizoram team has now picked up five points since new coach Rosario took over.

The first chance of the game came Minerva's way when, off a Juan Quero cross from the left flank, Dilliram Sanyasi got under a volley but the effort lacked power and direction.

Then, Kussaga took a shot in the 19th minute for Aizawl from a distance but Arshdeep in the Minerva goal was equal to it.

Albert then made a purposeful foray from the right channel for Aizawl to deliver a delicious cross but Arshdeep again made a timely intervention to thwart the danger.

The second half saw Aizawl pressing hard, particularly through Isak, whose runs from the right troubled a Minerva defence without the solid Lancine Toure.

After a few scoring chances were missed by the likes of Kussaga and Kareem Nurain, thanks mainly to Arshdeep's heroics, Isak's first purposeful run from the right channel brought Aizawl a much-deserved lead.

He found the shortest player on the field and the youngster Lalrinchhana pulled off a delectable header across the face of goal to beat Arshdeep.

Akash Sangwan missed a golden opportunity to equalise a couple of minutes later, finding himself in the clear inside the Aizawl box, but with only the keeper to beat, his shot was woefully wide off target.

Munster brought on Mahmoud Al Amna late in the game in a desperate attempt but a goal still eluded Minerva and Aizawl held on for a win.

The Indian women's football team faces Iran in their opening match of the inaugural Hero Gold Cup international tournament at the Kalinga Stadium, in Bhubaneswar, on February 9.

The four-nation tournament, the first such competition in India for the senior women's team, is being organised by the All India Football Federation association with the Odisha government.

Along with India and Iran, the tournament will also feature Myanmar and Nepal.

The tournament will be played in a round-robin format with the two top teams playing in the final on February 15.

AIFF General Secretary Kushal Das said the the primary objective of the tournament was to provide the best of exposure to the women's team as they prepare for the second round of the Olympic Qualifiers in April.

"The Hero Gold Cup is meant to provide additional opportunity for the Indian women's national team to face other powerful teams in a competitive format," Das said.

"While our team has been playing in friendlies overseas, we feel hosting such a competition will boost the growing popularity of women's football in India. Football followers in India deserve a chance to witness our national teams in action," Das added.

In November last year, India qualified for the second round of the AFC Olympic Qualifiers for the first time.

"It was a pleasure that AIFF came forward with the proposal for the Women's Gold Cup. Odisha's commitment towards sports, and especially promotion of women's football is well-known. Kalinga Stadium stands ready to welcome the women's teams for the 4-nation Gold Cup," Sports Commissioner-cum-Secretary of Odisha government Vishal Kumar Dev said.