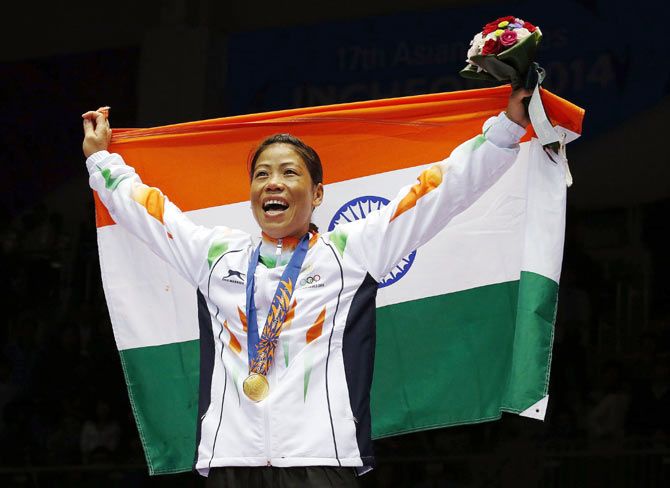 MC Mary Kom became the first Indian woman boxer to win a gold medal at the Asian Games when she defeated Kazakhstan's Zhaina Shekerbekova 2-0 in a evenly-contested flyweight (51kg) final in, Incheon, on Wednesday.

The five-time World champion and Olympic bronze medallist, who won a bronze when women's boxing made its debut at the 2010 Asiad, stepped up her aggression as the bout wore on to emerge triumphant.

India missed out on yet another bronze medal as Sandeep Kumar and Basant Bahadur Rana finished fourth and fifth respectively in the men's 50km walk.

The gold medal went to Takayuki Tanii, who clocked a personal best timing 3:40:19s, while the silver and bronze medal were won by Chilsung Park of Korea (3:49:15s) and China's Zhendong Wang (3:50:52s) respectively.

India crash out in quarters of men's volleyball

India fought hard before bowing out in the quarter-finals of the men's volleyball competition after losing to fancied Japan.

The Indians started brilliantly and pocketed the first set 25-20 in 24 minutes.

But Japan got their act together soon and drew parity by winning the second set 25-19, in 23 minutes.

India again restored their lead by winning the third set 25-23 but lost the next 20-25 to take the match into the decider.

The deciding set witnessed a close fight but Japan held their nerve to prevail 15-13 after an hour and 53 minutes at the Songnim Gymnasium.

The Indian women's sepaktakraw team finished at the bottom of the Regu competition in Group A after losing its last preliminary match to China.

They went down 9-21, 7-21 in 26 minutes and bowed out of the competition without a single victory.

In a lopsided contest, the Indians were hardly a match for the bronze medallists from the 2010 Games in Guangzhou.

China ended the preliminary stage atop of the group, winning all three of its matches.

India did not have a good outing in taekwondo as Aarti Khakal and Rajan Pandia Anand crashed out of their respective events.

While Aarti lost 8-15 to Ganiya Alzak of Kazakhstan in the Round of 32 encounter of women's 57kg category, Anand was shown the door by Yonghyun Park of Korea 1-7 in the Round of 16 of the men's 80kg category at the Ganghwa Dolmens Gymnasium.

In the women's 57kg category, Aarti started her contest on a bright note, pocketing the first round 2-0. The Indian continued her good showing but lost the second round 3-4 to the Kazakh girl.

She was completely off colour in the third round which the Kazakh girl pocketed comfortably by a 3-11 margin to seal the match and a place in the last 16.

Anand, on the other hand, fought valiantly in the first two rounds but his Korean opponent did just enough to garner a point each from both the rounds.

The Indian managed to earn a point in the third round but also conceded five points.

Later in the day, another Indian, Nakul Malhotra, will face Elias El Hedari of Lebanon in the quarter-finals of the men's +87kg division.

Indians fail to impress in canoeing and kayaking

It was a disappointing day for India in canoeing and kayaking as none of their participants could impress.

Ganeshvri clocked one minute and 28.03 seconds while Champa timed 29.39 seconds to bow out of the event.

Namita Chandel failed to qualify for the quarter-finals after finishing sixth in canoe single women repechage 1 with a timing of one minute and 33.37 seconds.

Earlier, Namita was placed 10th with a timing of (1:42.09 seconds) as she qualified for the repechage round.

In canoe single men's last 16 1 stage, India's Prince Parmar failed to advance after finishing a disappointing a 14th in one minute and 28.80 seconds.

Earlier in the day, Parmar had finished 15th in heat 1. 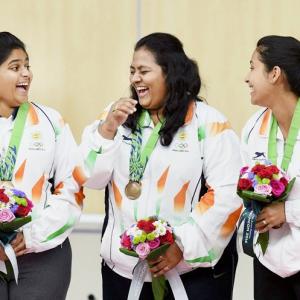